Blue Lights in the Rearview Mirror 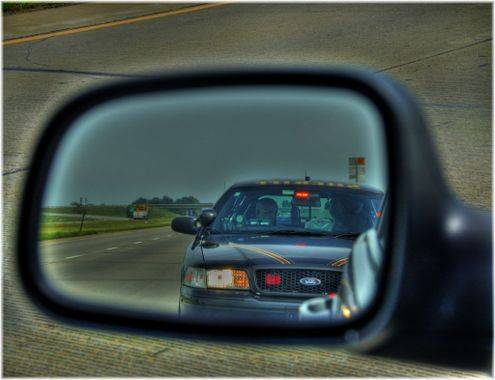 Traffic violations are the most common source of interactions between police and armed citizens. The topic of whether, and if so how, to disclose your armed status to an officer is a topic of debate within both the armed civilian and law enforcement communities. If you’re a regular reader of the Bravo Concealment blog or are a serious student of the armed lifestyle, you know that an ounce of prevention is better than a pound of cure! Here are some tips for maintaining your own as well as the officer’s safety during a traffic stop.

Your gun should not be visible.

There are places on your body and in your car that can keep your firearm(s) accessible in an emergency as well as out of sight from thieves and police, and out of reach of anyone unauthorized to touch your guns—including your own children.

Before some of you get all excited, this is not to be taken as encouragement to deceive police. The intent is to give you some control over the timing of the topic, if it comes up at all, and to enhance the sense of security for both you and the officer.

Your hands should stay visible. 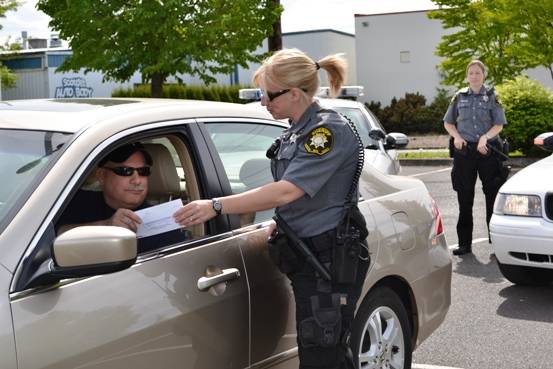 Driving armed should include a plan to access the documents an officer routinely requests—drivers license, proof of insurance, and vehicle registration—without digging around and maintaining maximum visibility of your hands.

In my vehicles, my license lives in my purse and can be accessed expediently while the officer is exiting his or her vehicle. Registration and insurance are kept in a CD holder on the visor, where they can be accessed while keeping my hands visible.

Set the stage for officer interaction. 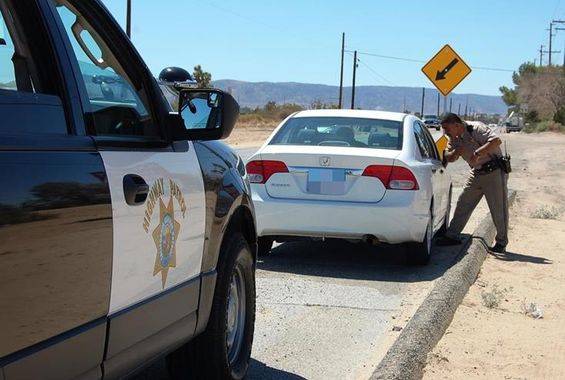 Lower windows on both sides of the car—skip this step on the passenger side if your vehicle has crank windows. Stay in the vehicle and keep your hands on the steering wheel as the officer approaches and during the conversation. Necessary documents should be in the left hand, ready to give to the officer.

Of course, a traffic stop is not exactly a happy occasion for either the motorist or officer. Regardless of the officer’s demeanor, a recalcitrant attitude is not in your best interest. Being pulled over can make some people aggravated and others nervous. Take a deep breath and remind yourself to be calm and courteous.

Disclosing that there are guns on board.

If state law requires that you disclose your armed status, volunteer that information early in the conversation. “Officer, in accordance with state law, I want to let you know I have firearms in the car.” After that statement, allow the officer to ask questions or tell you how to proceed.

Ignorance of the law is not an excuse for breaking it. You’re obligated to know the law in states where you travel. How? I use www.handgunlaw.us. It’s a free and consistently-updated source. Don’t rely on printed guides; statutes change often.

If there is no law requiring firearms disclosure, assuming you’re traveling with discreetly-carried guns, if the officer doesn’t ask if there are guns on board, and you’re not in a situation such as a collision in which you must be separated from your vehicle, disclosure is at your discretion—and, in this instructor’s opinion, should be avoided.

Why avoid the conversation if it doesn’t come up? Cultural beliefs about guns vary widely among officers, as varied as those beliefs are in society in general. The officer you encounter might be a gun fan and engage in some friendly conversation about guns. At the other end of the spectrum, they may hold the belief that any civilian with a gun has criminal intent and react with extreme alarm. In more than one instance and even in rural locations that are generally gun-friendly, overreactive officers have commanded gun-carrying drivers, pulled over for minor infractions, to lie prone on the ground and to endure threats. The war against cops is real and officers know every traffic stop might endanger their lives. It’s not surprising, then that overreactions are not uncommon. Even if an officer’s behavior is clearly inappropriate, do not physically resist and do not launch your own verbal attack. Grievance procedures and courts are the safest way, legally and physically, to cope with these isolated instances. 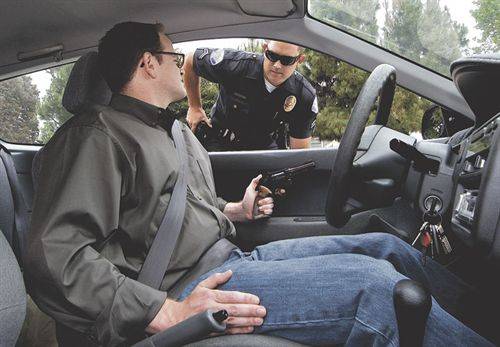 There’s a good possibility, when traveling in your home state, the officer will be aware of a driver’s licensed-to-carry status after communicating with dispatch. This often results in being asked directly if you have a gun in the car.

Most licensed carriers, being justly proud of their law-abiding status, feel best about answering in the affirmative when asked if they’re armed. But where state law doesn’t require it, the choice is yours. Lying to an officer is not a crime unless you’re already part of a criminal investigation. If you do disclose, as most people do, it’s highly possible that the next question will be “where is it?” Answer this question verbally and not by hand gestures!

If you have a weapon in plain view or are suspected of taking part in illegal activity aside from an isolated traffic violation, an officer may legally disarm you for the duration of the traffic stop (search Terry vs. Ohio to learn why). This may include a pat-down. In some states, this applies if you have disclosed your armed status even if the weapon is not visible. Do not resist or argue with being temporarily disarmed or patted down. If the officer wants to see or seize the firearm(s), verbally direct him or her to their location while keeping your hands on the steering wheel. If your gun is on your person, keep your palms exposed and away from your body as you state the location of the gun. Demand that the officer handle the firearm if they insist on disarming you. Depending on their familiarity with different firearms, you might need to explain the unloading procedure if your gun isn’t the same general type as the officer’s sidearm. You should be comfortable delivering weapon-clearing instructions. If you’re not, you have some work to do.

Do not reach for a gun or other weapon yourself, even if asked! Remain calm and keep your hands visible.

The Fourth Amendment and You

The Fourth Amendment of the United States reads:

The right of the people to be secure in their persons, houses, papers, and effects, against unreasonable searches and seizures, shall not be violated, and no warrants shall issue, but upon probable cause, supported by oath or affirmation, and particularly describing the place to be searched, and the persons or things to be seized.

Still working under the assumption here that you’re not demonstrating evidence of more serious violations like driving while intoxicated, possessing illicit drugs, or felonious traffic behavior, an officer has no right to search your vehicle or possessions without your permission. Such requests are quite rare, so the risk of an intrusive search is small. However, this is where being agreeable is discouraged. If you are not guilty of egregious violations, you are perfectly within your rights and strongly encouraged to demand that a search warrant be obtained. Overly enthusiastic, unwarranted searches can result in damage to property and even physical wellness.

The vast majority of law officers are professional, ethical and, like most of us, just want to get done with the day and go home. If you have the misfortune to encounter one who is rude, abusive, or conducts a search against your will, do not physically resist—the likelihood of unintended and severe consequences is high. Document the incident as best you can and deal with the situation through legal channels later.

A traffic stop or fender bender is a predictable occurrence. Use the advice here and have a plan to handle your interaction with police in a collected manner that gives both you and them peace of mind to the extent possible. Chances are, you’ll have a professional interaction that leaves you thankful for the work that police do. Happy traveling!