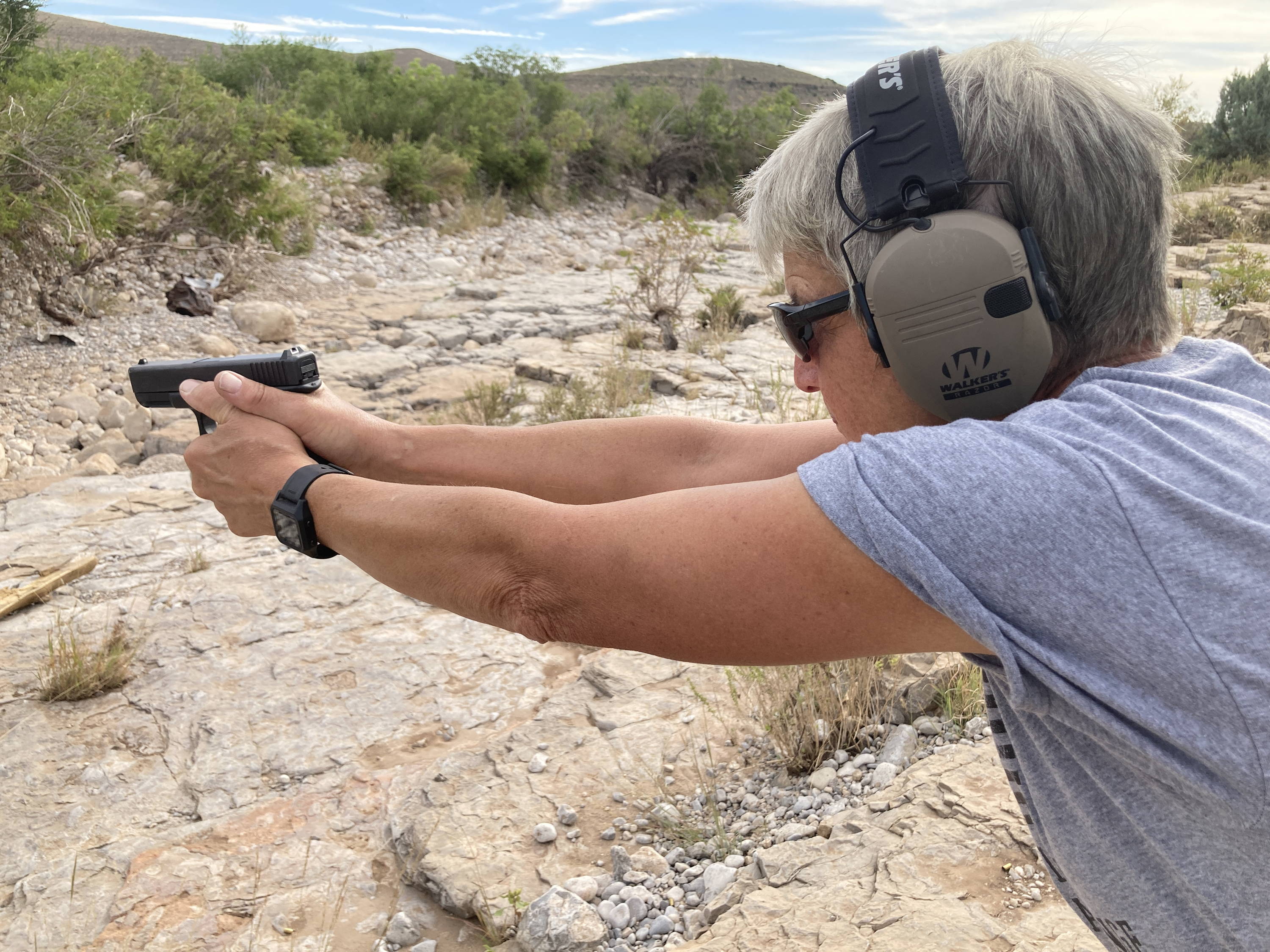 Breathing. It doesn’t seem like that would need to be one of the Seven Fundamentals of shooting since you’re doing it anyway and if you’re not, well, you’ve got bigger problems than thinking about the shooting fundamentals. At least where defensive shooting is concerned, this is one fundamental that can be perilous to ignore! Harnessing this cyclical and necessary bodily function can result in better accuracy and better performance in high-stress situations, so it’s worth examination.

Attention to the Breath Cycle for Better Practice

The effect of breath on accuracy is well-understood for rifle shooting, which is often done in the prone position. The rise and fall of the torso associated with the breath cycle, combined with a long barrel that leverages that subtle motion, can have a dramatic effect on point of impact. Modern teaching for breath use in rifle marksmanship is to coordinate the shot break with the bottom of the breath cycle, when lungs are empty. This makes for a consistent and predictable pattern.

Coordinating the longer trigger press of a handgun with the empty-lung phase of the breath cycle, as is done in rifle shooting, can also assist pistol shooters under certain circumstances. First, consider the beginner shooter, especially a nervous beginner. Holding the breath unconsciously is a common symptom of trying too hard to coordinate the multiple tasks associated with firing a good shot, or of simply being tense. Simply reminding oneself to breathe when nervous can help.

When firing for accurate groups and when at least some luxury of time is allowed in practice or in a competition, mimicking the rifle shooter technique of shooting during the pause at the “bottom” (or empty-lung) phase of the respiration cycle can have the same accurizing effect, especially for shots on targets at relatively extreme distances of 100 yards or more. 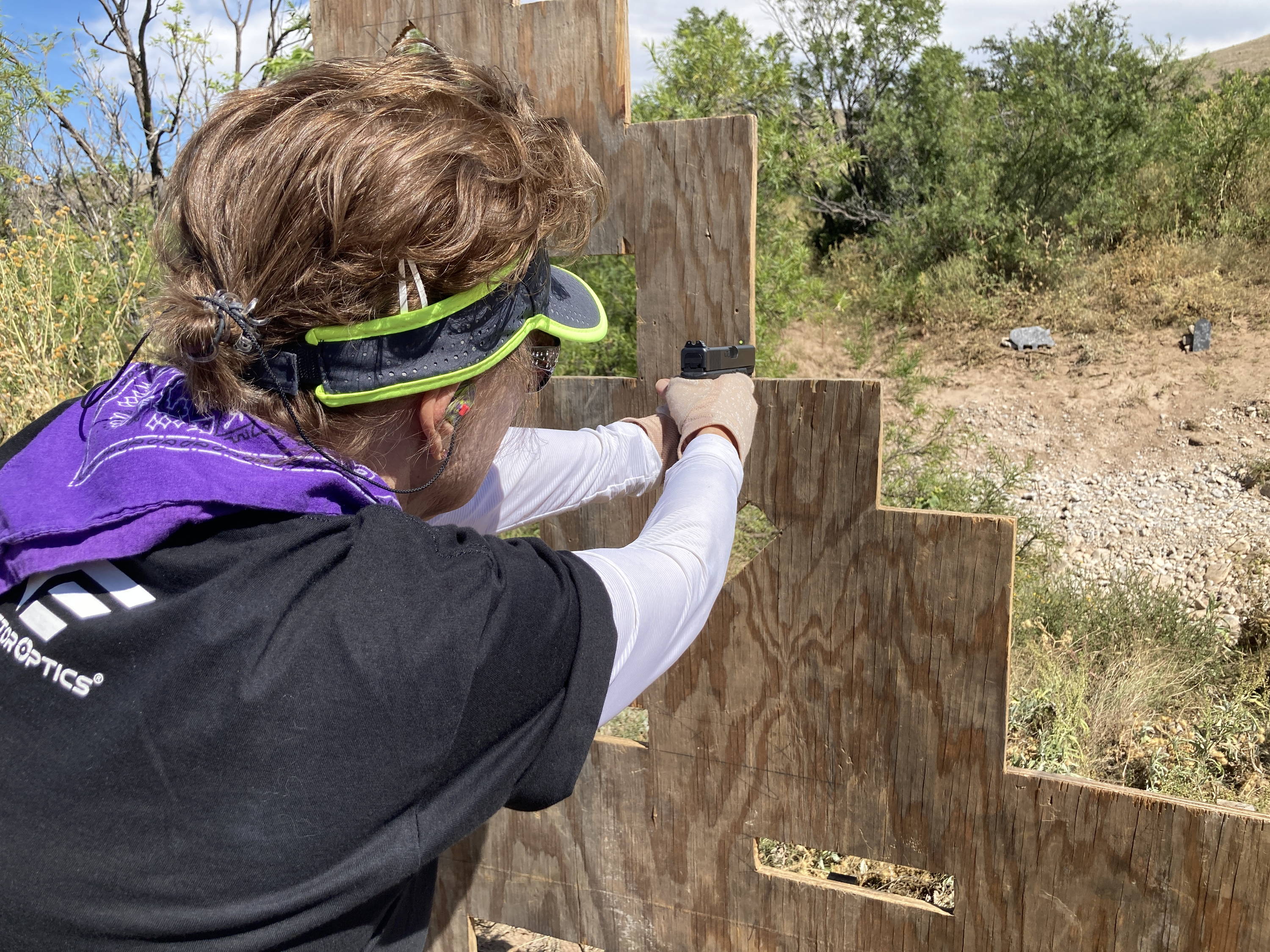 To face a threat or potential threat to personal safety is to be under stress. The unprepared, uneducated person is often seriously impaired by the physiological effects of stress, including respiration and heart rate, which are coupled closely to each other. With just a little awareness and effort, these potentially debilitating effects of stress can be managed and sometimes can even become assets during a potential or active defensive encounter.

Harnessing the breath is simple. One technique, sometimes called box breathing, is substantiated by research to preserve mental and physical faculties during stressful moments. It entails inhaling for a count of four, holding the breath for that same amount of time, exhaling on the four-count, and again holding empty lungs for a count of one, two, three, four. Effective, but occupies a substantial share of concentration at a time when the bandwidth to apply it might not be available due to pressing circumstances.

Personally, I’ve become a user and advocate of a simpler way to control stress through breathing. Try this now:  put the tip of your tongue behind your top front teeth and inhale.

That’s it. But seriously, as you practice a few breaths in this way, feel how the abdomen expands a bit with true deep breathing. Feel the amazing slight tingle in your fingertips as oxygen reaches the capillaries there. This is like magic for preserving the fine motor skills required to fire accurate shots, not to mention taking in information and making decisions with logic rather than excitement.

To me, the latter technique is pure gold. I use it all the time, not just when interacting with difficult people one-on-one. Using it every day, for the little stressors of daily life, has made it a handy part of my toolbox that I know I can rely on up to and including life-threatening situations.

Most of the time on the range, it’s sufficient to just remind oneself to breathe without having to focus on a particular technique. Learning to read the signs of when it’s time to just breathe, and/or time to apply the tip-of-tongue or box technique, will help you become a veritable Ninja in the immediate stress management department.

What do I mean by “read the signs?” A common symptom of stress while shooting is a fine-motor tremor. This can be due to nervousness, lack of fitness in the shooting arm(s), or a combination of both. Some medical conditions and medications are also conducive to the shakes. Regardless of the cause, most people’s reaction to that tremor makes good shooting less likely. Performance-impairing self-talk often kicks in. When that negative thinking comes out of a shooter’s mouth, it usually sounds like one or more of the following:

...Those may not be the exact words, but you get the idea and perhaps have experienced the same. Understand that no good can come out of those responses to the shakes! But breathing well can at least not allow it to get worse and, in most cases, can fix the shakes altogether.

If you have anxiety or a physical condition that leads to the shakes, here’s a strategy. Imagine you’re driving down a highway (AKA shooting) and the pavement turns rough (the shakes). You’re going to take the next exit onto a much smoother road, called Breathe Street. So those tremors or other symptoms of anxiety like an increased heart rate or queasy stomach simply become road signs that remind you to make that turn to Breathe Street. Rather than being a symptom that triggers thoughts that snowball into a cluster of anxiety-plagued performance mistakes, “the shakes” are now just a welcome road sign reminding you to exit immediately onto Breathe Street—and what else is there to do on Breathe Street but breathe well, using one of the techniques described above?

This is one of those times when a marksmanship fundamental is beneficial in life as well. Practicing the art of breathing as part of range and self-protection training has become a reason I cherish shooting as a tool for leading a better life. Do you do the same? If not, would you try it for a while and let me know how you get on in the comments? Enjoy.