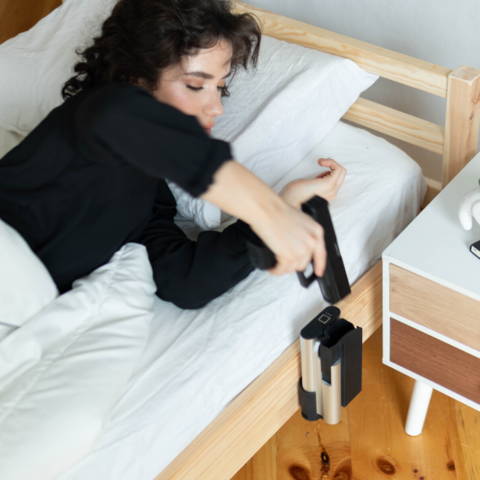 First-Time Gun Owner? Getting up to speed on safety and skills

So current events inspired you to purchase your first gun. Congratulations and welcome to one of America’s largest, friendliest communities!

Many new gun owners don’t get to feel the increased confidence and real safety they anticipated from owning a gun. That’s because gaining those things comes from having some competence in handling your new safety device. Here are some tips to get you started.

If there are other people---toddlers, children, teens, their friends, or other relatives, roommates, and so on—in your home, safe storage is a critical factor to be addressed now. Guns for self-protection require owners to establish a balance between rapid access to the gun and ammunition in case of emergency, and security to keep off the hands of anyone who doesn’t have your permission to touch them.

It’s not unusual to hear someone keeps a loaded handgun on their bedside table at all times. While this low-security method offers instant access and can be appropriate for a person or couple who can trust themselves not to put hands on the firearm when not in full control of their mental capacities, it is a very high-risk method for some.

“Control of mental capacities” refers to one’s ability to go from fully asleep to alert and competent to assess a situation. It also means not being under the influence of prescription or recreational chemicals. Be honest in your self-assessment and add difficulty to your method of deploying the gun according to your ability to become alert and oriented. 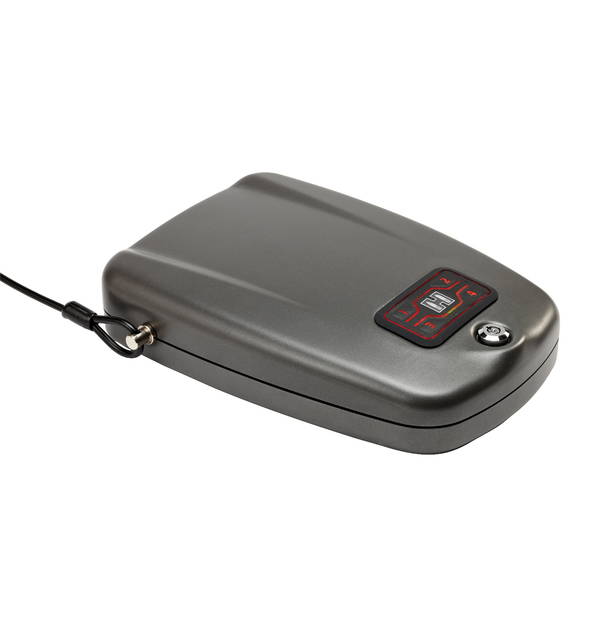 -Hornady’s Rapid Safe is an example of a quality electronic safe. 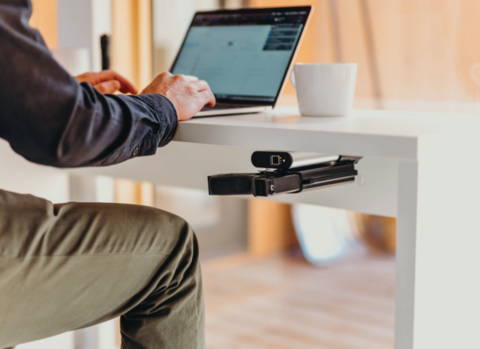 -The Reach holster by Vara Safety leaves the gun visible yet protected, and can be bolted to solid wood or metal furniture.

While I’ve not personally tested the Reach outside of a trade show, it appears to be a rapid and secure way to keep a home defense pistol.

Shop carefully. Some brands of electronic safes have unreliable performance with electronic components. At least one brand has reliable electronics but its mechanical lock is easily overcome with a paperclip, and the tutorial on how to do so is on YouTube!

Remember that e-safes require batteries and batteries require replacement. If you fail at renewing your home’s smoke detector batteries, chances are you’ll do the same with a safe. A metal lockbox, bolted to furniture, is the next most secure method---though now you’ll need to make a plan to keep the key both hidden and rapidly accessible. 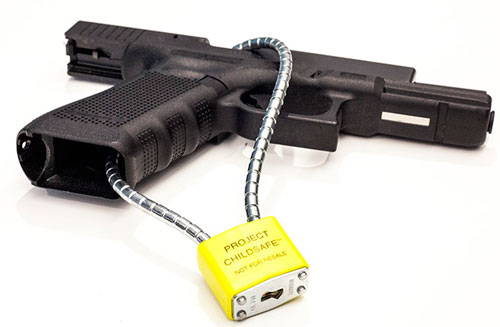 If you carry your gun outside the home and are less concerned about rapid access at home, the most economical storage method is one that was included with your purchase if the gun was bought new from a dealer---a cable padlock. This type of lock is very secure and prevents unintended discharge, but does nothing to prevent theft and slows down access to the gun, big-time. If you want a padlock but don’t have one, most local law enforcement agencies or gun stores will provide one free.

Handle your gun often and correctly, so that handling it unsafely feels wrong

“I have a gun but I’m afraid to even touch it,” is a statement I’ve heard too often, especially from female owners. The gun you avoid touching won’t magically protect you in times of danger. It’s a gun, not a lucky charm! Learn the Four Rules of Firearm Safety. More importantly, apply them every time you pick up your gun. Applying the Rules eliminates the possibility of “accidents.” Applying the Rules is the foundational habit for wielding your firearm with ease and confidence.

The Four Rules as I and many others honor them are as follows:

1. Every gun is always loaded.

Treat the gun like it’s loaded, even when you know it isn’t. What you do in casual moments is what you’ll do in a crisis!

Get training from an instructor with a recent certification. If possible, choose someone with positive recommendations from people you respect. With their tutelage, learn to load and unload your gun without a fuss. Learn to check its load condition.

Eschew the company and advice of anyone who mocks you for practicing safe gun handling. Your fear, turned into healthy respect with training and practice, is a powerful force for safe gun handling!

2. Never allow the muzzle to cover anything you’re not willing to destroy.

Your gun is always pointing somewhere! Most new gun owners are very conscientious about not “pointing” the gun indiscriminately. However, when formal practice is over, the same people mindlessly allow the muzzle to pass over their own feet, hands, or even other people as they seem to think they’re off the clock. YOU ARE NEVER OFF THE CLOCK WITH GUN SAFETY. Until the gun is secured in a holster or case that securely shields the trigger guard and doesn’t allow the gun to fall out, the muzzle’s direction must be central to your attention.

3. Finger(s) OFF trigger until sights are on target and you’ve made the decision to fire. 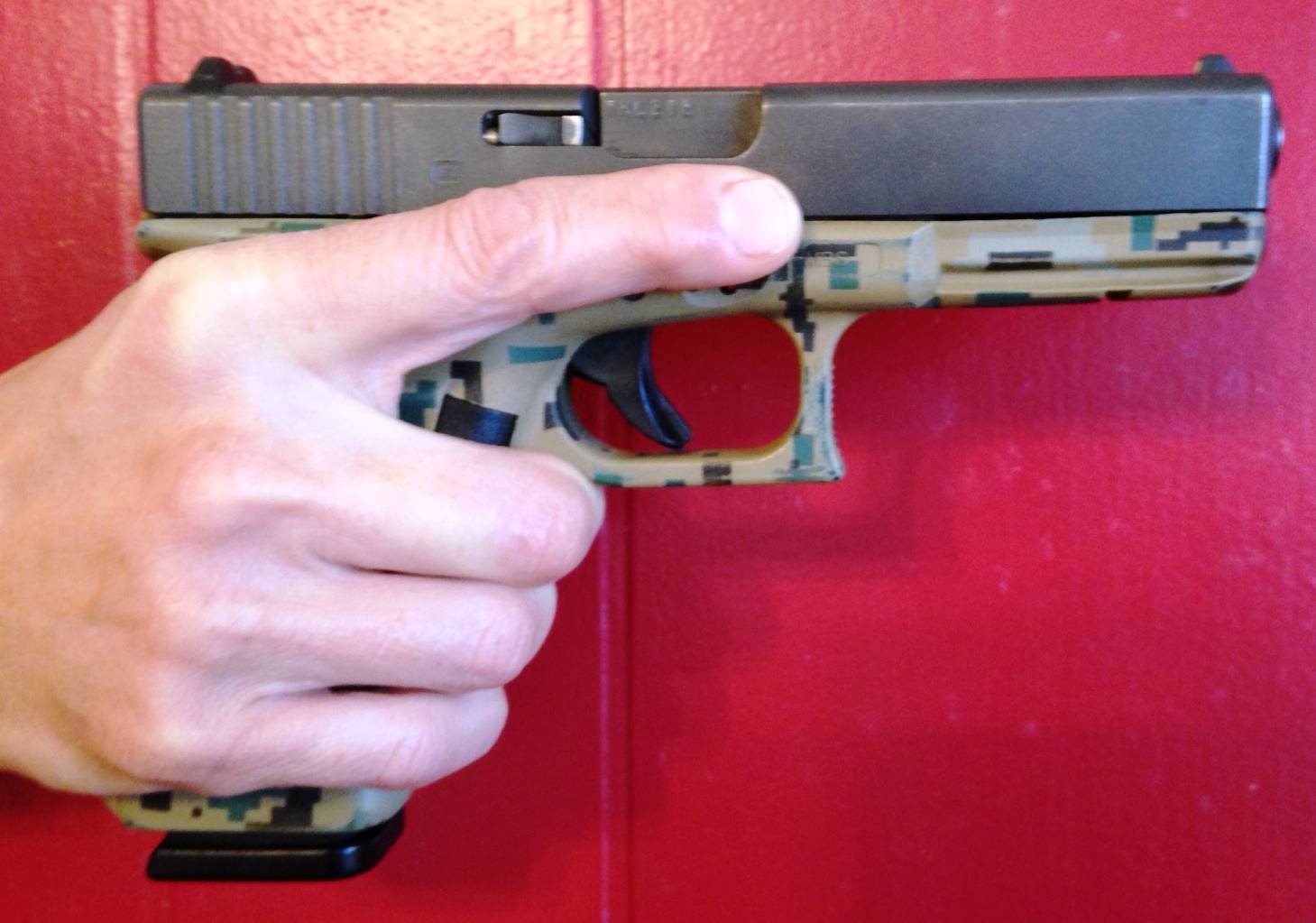 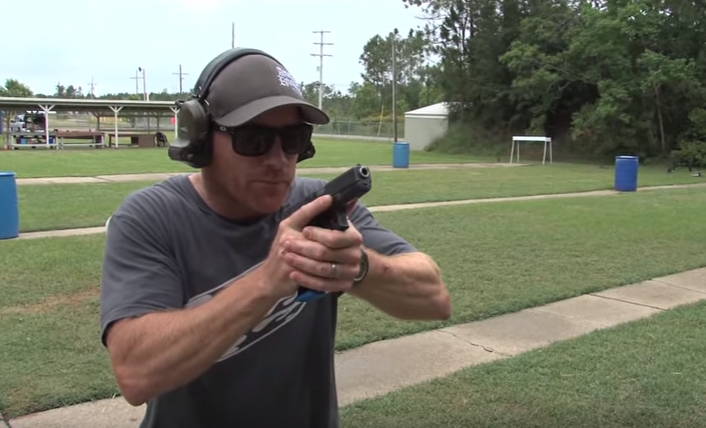 Pick up and hold a handgun the same and correct way EVERY TIME. In the words of former Seal Team VI member-turned-instructor Kyle Defoor, feel the steel. He’s referring to the steel slide on today’s polymer-frame handguns, but the principle is universal.

This is probably the most important of the Four Rules to master as a new gun handler. Make it your business to own this one.

Simply keeping your fingers off the trigger is not enough to be prepared to actually use the gun. Be disciplined enough to pick up and hold the gun the same way, every time. The way I’m about to tell you is not only safe in terms of preventing negligent discharge, it also makes the gun harder for a bad actor to take from you, and easier for you to put it into action. 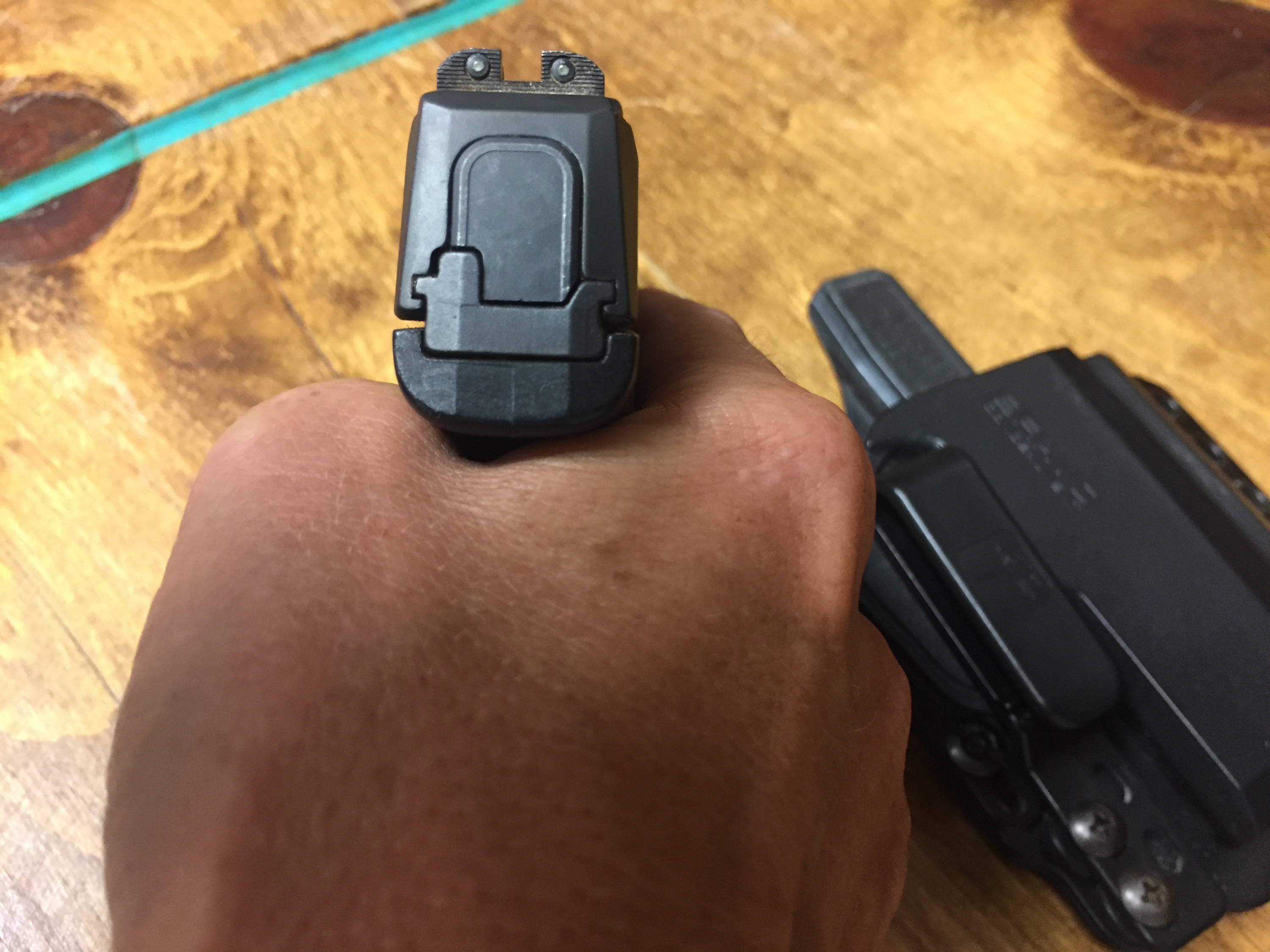 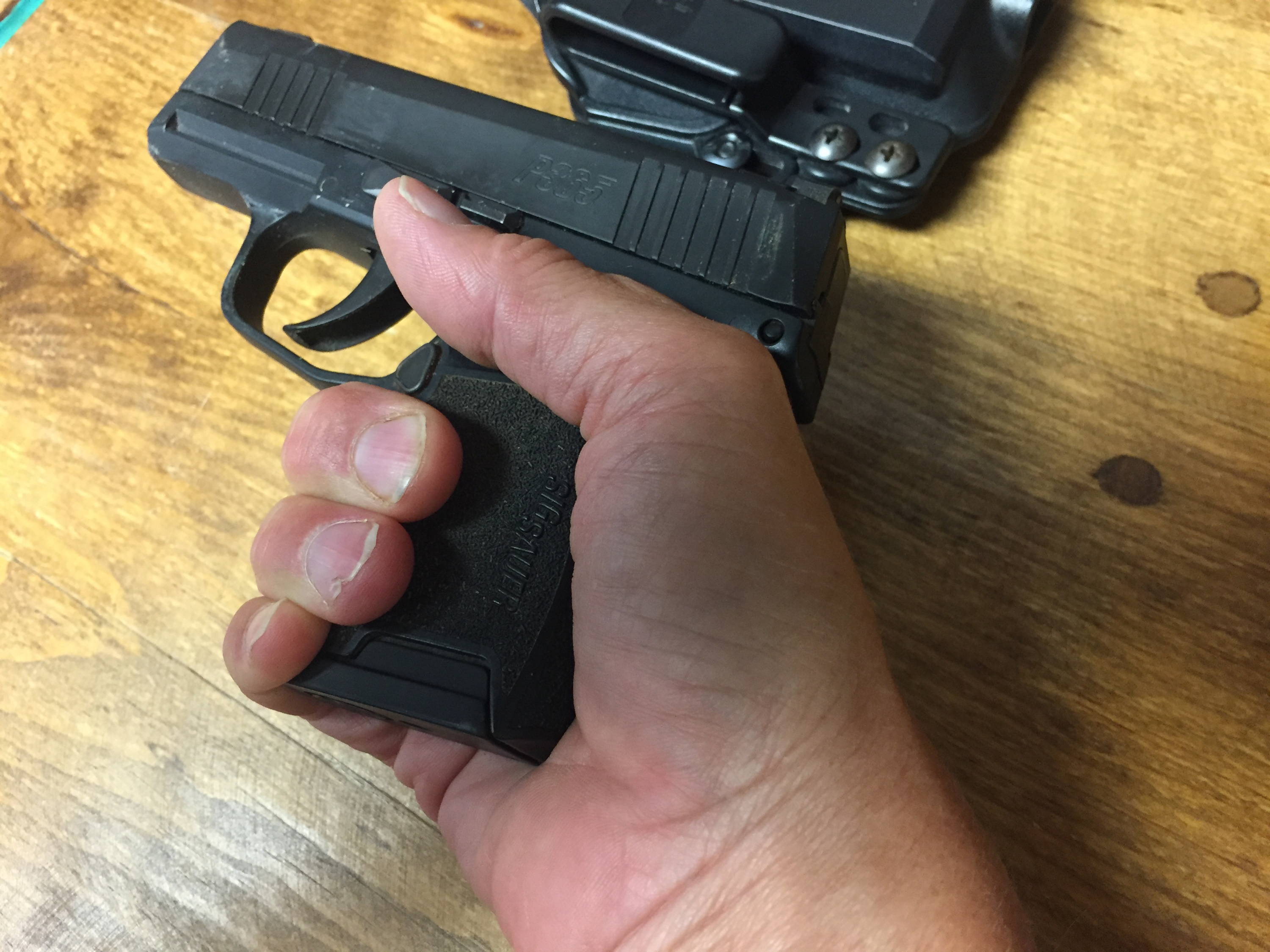 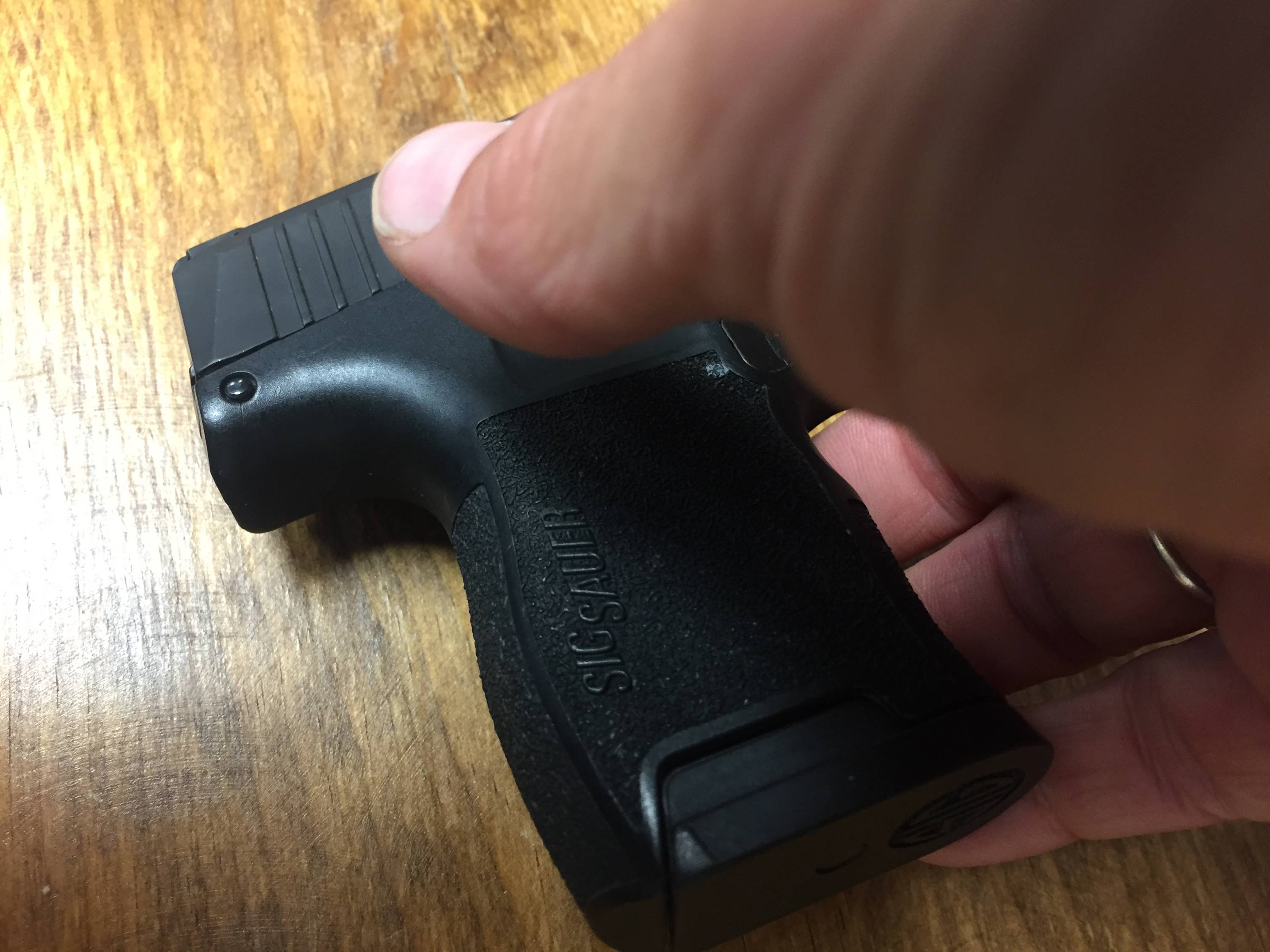 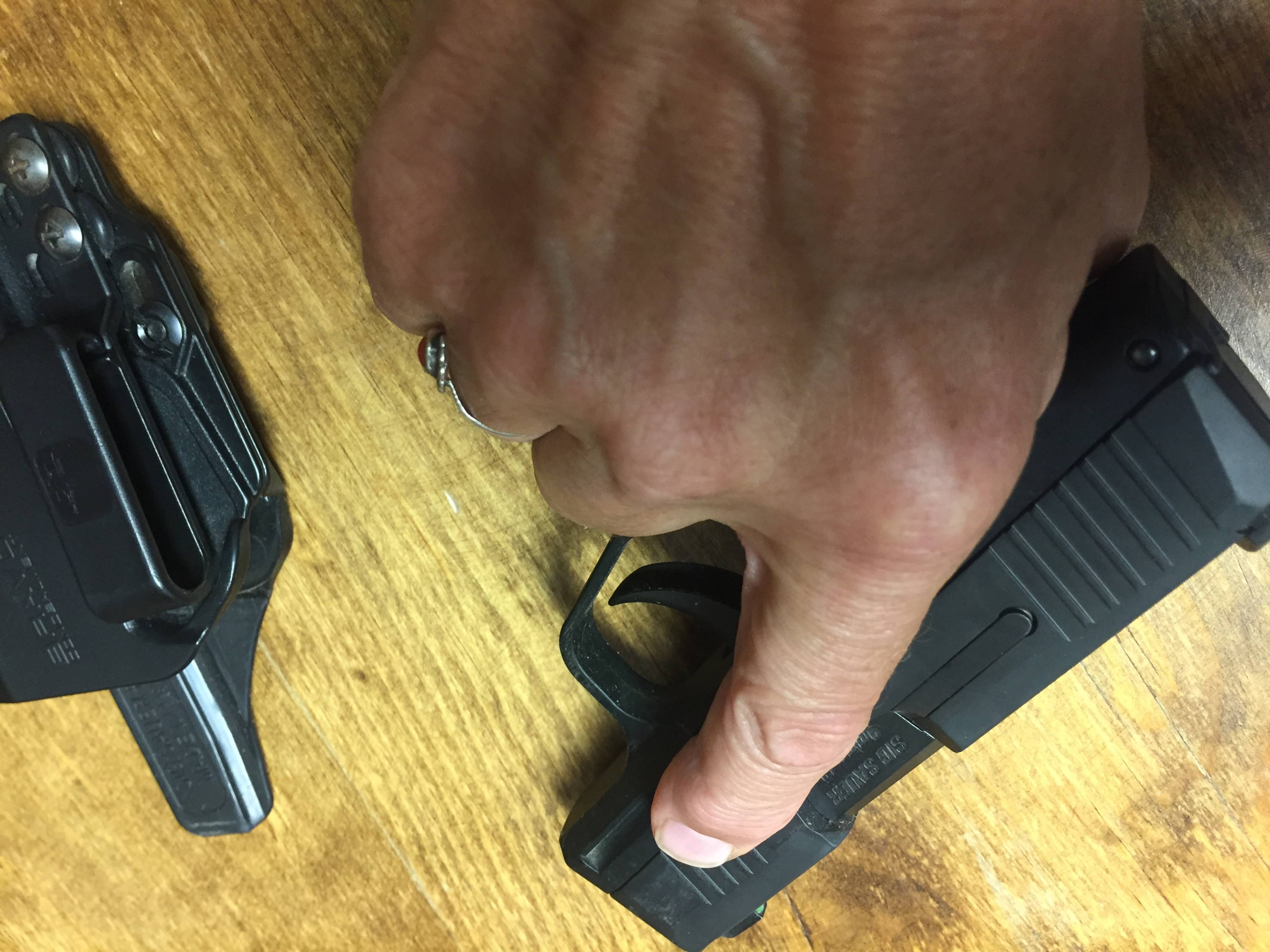 Think you’ll be able to control your trigger finger just fine because you’re cool like that? Try this.

- Curl the bottom three fingers of your shooting hand as if they’re wrapped around your handgun grip.

- Put the trigger finger at about 90 degrees, where it’d be if it were resting on the trigger.

- Now, tense up the lower three fingers—same as would happen automatically if you were in a situation where you’re already on edge and responding to changing sights and sounds.

Your trigger finger moved, didn’t it?! You’re human, not a robot. Give yourself some margin of error and feel the steel unless you’re actively firing.

Pick up and handle your gun EVERY TIME like this You MUST be aware of where all your fingers are! Ask yourself and LOOK to be sure. If your fingers are placed correctly:

A straight finger, in contact with the slide (or barrel, if you have a revolver or certain Beretta models) should become your trigger finger’s happy place of sorts---the only place it feels comfortable.

When you think about your gun, think about how it feels when you hold it correctly. In your mind, feel the weighty apex of the backstrap in the V of your hand. Feel the cool steel under your trigger finger as it rests flat against the slide or barrel. Physical habits are strengthened by mental practice.

Isolated but tragic events have occurred when gun owners unthinkingly decided to fire upon suspicious noises or sights. For example, a grandfather fired from his bedroom, without looking first, into the kitchen when he was roused from a weekday nap by the sound of rattling silverware. He was convinced a burglary was underway. His school-skipping grandson is now dead, and that grandfather wears a burden that is surely unbearably heavy. A woman, recently separated from her husband as part of an amicable divorce, fortunately missed both her ex and a lengthy jail sentence when she shot at a shadowy figure in what had been their shared garage. Her former husband had returned to pick up some items he legally owned, unannounced and peacefully.

You MUST confirm with your EYES that what you think you may have to shoot is indeed a threat to your life and not just a random, unexpected action. Shoot based on sight, not assumption.

Once your basic gun safety and marksmanship skills are solid, train to be cognizant of the environment around any threat that justifies presentation of the gun and possibly shooting. It is virtually guaranteed that there will be people and things you cannot ethically fire upon when in a public place such as church or at a gas pump! You are responsible for where every round goes.

Don’t let any of this intimidate you.

The only way to become ready is to practice, and practice correctly. There is grave responsibility in handling a gun---and grave consequences for not going armed in some situations as well. Decide which side you want to be on. To be passive in your gun ownership and training is to choose victimhood when faced with a threat that can easily overpower you.

Millions of people have prevented or prevailed in the face of violence or the threat thereof because they knew how to handle their firearm. They’re not any more special than you. This is within your reach. Get the gun and ammo. Get the ear and eye protection. Get the training. And get to the range, or at least dry fire, on a regular and scheduled basis.

In my estimation, Bravo Concealment gun holsters go above and beyond. First, they meet the minimum safety criteria of impenetrably covering the trigger guard and not allowing the gun to fall out. Second, they allow me to get a correct firing grip on the gun while it’s still in the holster—web of hand at top of backstrap, lower fingers and thumb securely wrapped around the grip, and trigger finger straight on the holster---until I draw the gun, at which time it’s resting on the slide.

SAFETY GOES BEYOND THE FOUR RULES.

A holster that allows me to obtain a firing grip while the gun is holstered means I’m also in control of the gun and ready to fire from the draw. Safety first, of course, but rapid deployment counts too. With Bravo Concealment I get both. That’s why, most days, it’s what’s on my belt!