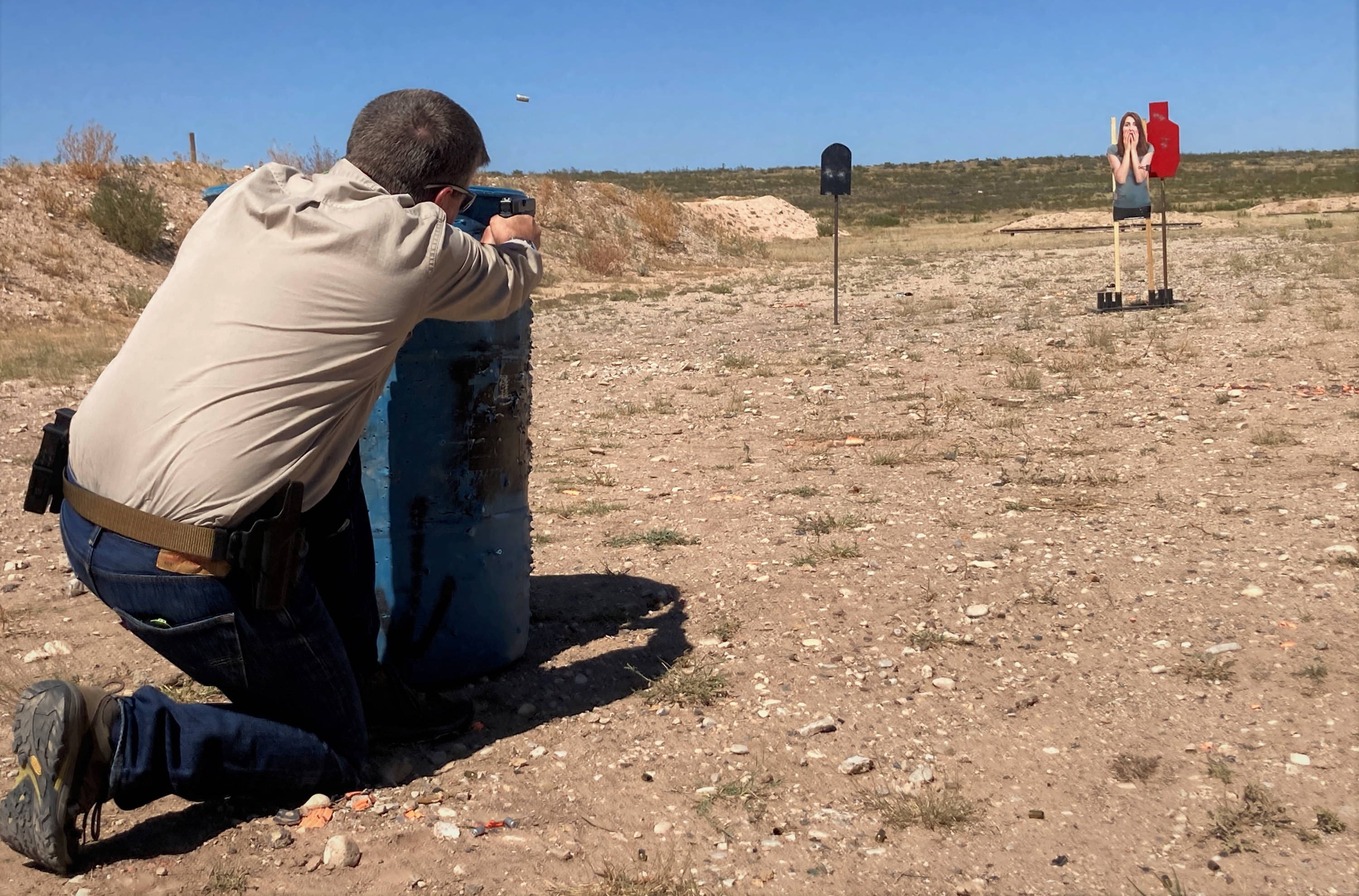 In the Seven Fundamentals of Marksmanship, follow through may be last, but it’d be a mistake to treat it as least important. In fact, all seven are important, that’s why they’re called fundamentals. Among them, follow through is probably the least well-understood by new shooters.

My goal in this article is to share the definition and methods I use to make sure that follow through happens and makes my pistol shooting better. There is follow-through for wingshooting and rifle shooting, as well as for shooting hoops, golfing, or pretty much any sporting activity. The techniques I describe here are handgun-specific.

Following through your shots is, along with gripping the gun well, probably the fastest way to go from looking like a beginner to looking like a pro. Since people are all about posing for “the Gram” these days, I put that out there first, but of course there are functional reasons for applying follow through. It helps deliver faster, more accurate successive shots. Although it’s not the most popular fundamental (that would be trigger control or grip), without follow through, trigger control is incomplete. Trigger control and follow-through travel as a team when shooting is done well. So if you’re not already doing it, read on.

In simplest terms, follow through is “two sight pictures; one shot.” Sight picture disappears momentarily when the shot is fired, thanks to recoil. The competent shooter sees a second sight picture, even if only for a microsecond, after the recoil impulse. The uneducated shooter acts as if his or her job is done as soon as they hear “bang.” The competent shooter uses that second sight picture as the frame for the next shot, or as confirmation that he or she is wielding the gun correctly before stopping the shot series.

But wait—isn’t sight picture also a fundamental? Why yes, of course. And unless you’re shooting with a reflex sight, sight alignment, yet another fundamental, is required to attain a sight picture. Think of a nice button-down shirt. Shooting without applying follow though is like that shirt, but with the buttons missing. So you should learn it because being without it is just weird—like wearing a shirt with buttonholes but no buttons.

As I do it, there are three components of good follow-through. In rough order, they are:

The most common mistake is to relax the support hand as soon as a shot is fired. Refer to my earlier article on the fundamental of grip.

Here, the most common mistake is raising the eyes over the gun, looking for holes in paper. Look instead for your sight picture. The holes will be there when you’re done. Refer to my earlier article on the fundamentals of sight alignment/sight picture for more information. Looking for holes instead of following-through is a nasty habit that will soon result in shots stringing low, as the impulse to break the gaze away from the sights happens even before the bullet exits the barrel!

A useful concept I’ve carried with me from the Appleseed rifle marksmanship program is to take a mental snapshot of where the front sight was on target at the moment the shot broke, while holding the trigger back. When I have the luxury of at least a little time and am shooting for precision, I do the same for every shot out of a handgun. When I have an answer in my mind about where the sights were, and I’ve re-established sight picture post-recoil, I allow the trigger to push my finger forward until its mechanical reset is felt. While this technique is not something that’s reasonably done in a gunfight, it is a building block of excellent shooting and of becoming intimately familiar with how the trigger on your particular gun operates. Feeling and consistently using is a fine-motor aspect of follow through and may take time to develop. See my earlier article for a more complete discussion of trigger control. 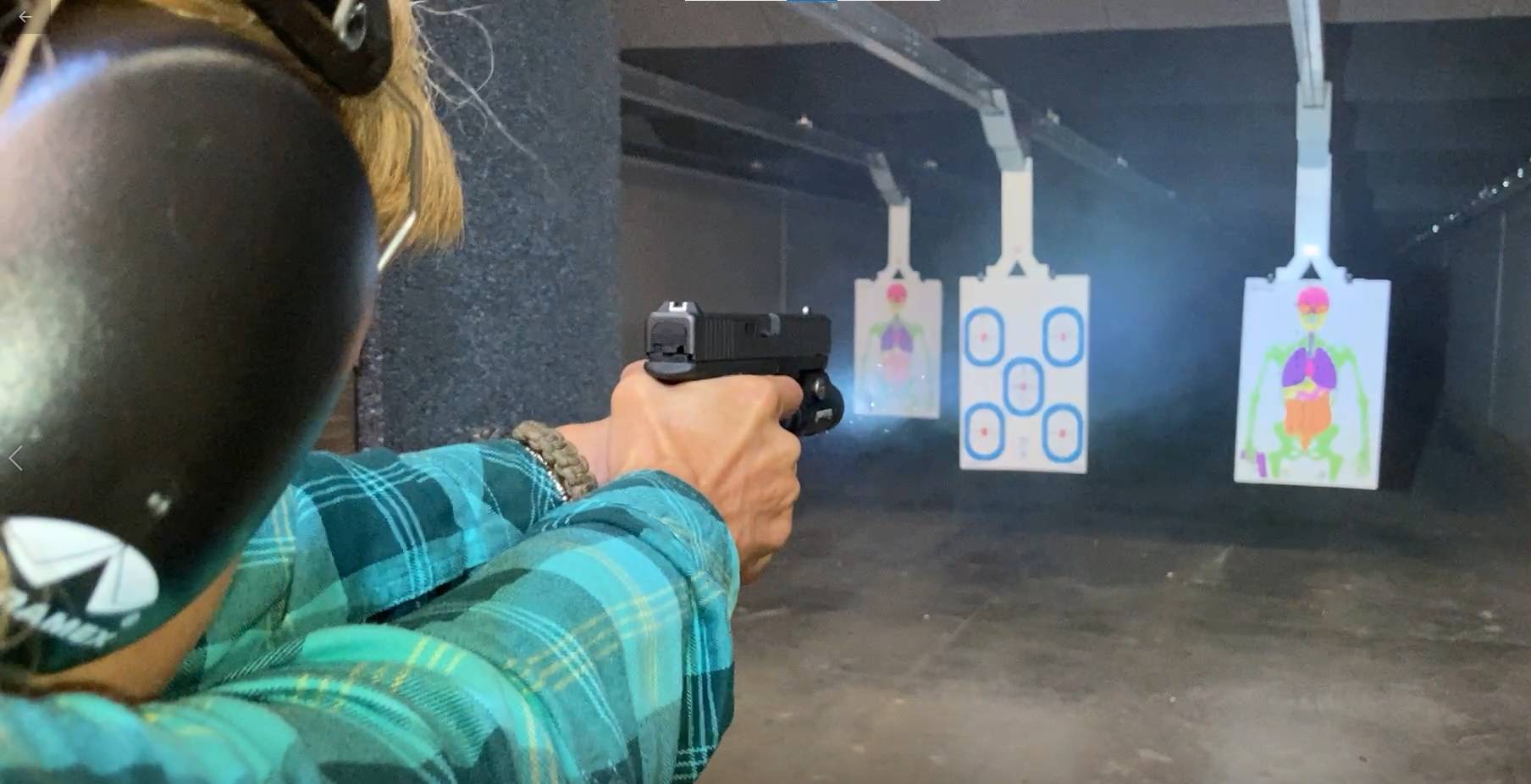 Good follow through includes maintaining physical contact with the trigger until after the eyes have seen the second sight picture of the last shot of the drill. To not involve the trigger finger in follow through is to make shooting much more difficult, at least after the operator can perform the Fundamentals with at least rudimentary skill. This is not a violation of the finger-off-trigger safety rule, as the sights remained trained on target and the shooter is in the process of firing.

If you’re starting to get the impression that follow through is blended in some ways with some of the other six Fundamentals, you’re right. In fact, follow through can be thought of as the glue that holds the Seven Fundamentals in a nicely-arranged presentation.

By now you understand that following through is necessary for putting tight groups on target in a timely manner. Watch a professional shooter firing multiple rounds and you’ll see the hallmarks of good follow-though—a gaze that stays level with the sights, a trigger finger that stays in contact with the trigger between shots on the same target or cluster of targets, a stance that stays solid in resistance of recoil.

This concludes this series of six articles on the Seven Fundamentals of Marksmanship. If you’re a new shooter or even an experienced shooter who doesn’t have the advantage of formal training, a good self-training exercise would be to peruse these articles and spend a series of range sessions focused on doing one or two of them perfectly. You’ll probably surprise yourself with how fast your shooting improves—and how much better you look doing it.