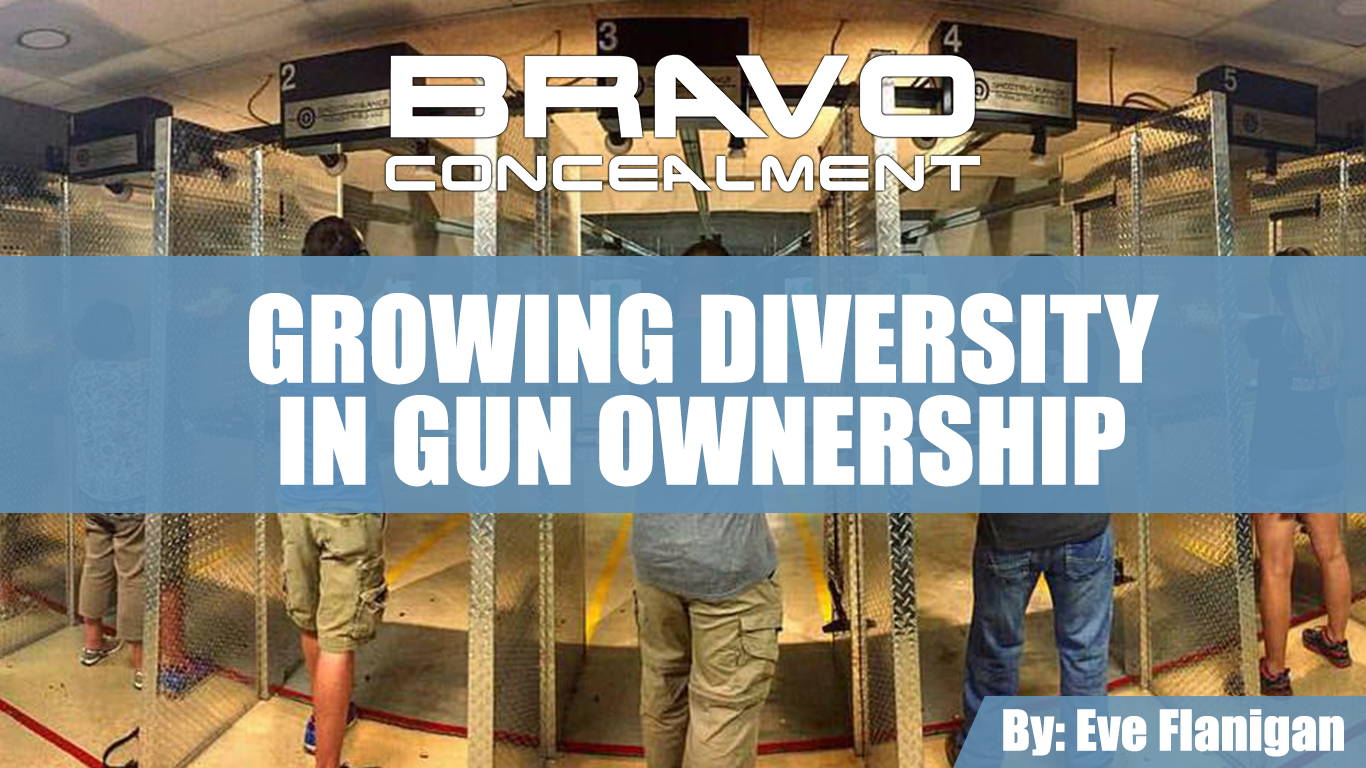 Most people have heard of the NRA, but the National Shooting Sports Foundation (NSSF) is not yet a household name, despite massive influence in the gun industry. The mission of NSSF is to promote, protect and preserve hunting and the shooting sports. One of its many services is providing information on trends to industry insiders so they can strategize for the future while staying relevant to current consumers. In 2019, NSSF released a report based on telephone surveys of thousands of adults across the 50 states, conducted by an independent research firm. Among those thousands are nearly 1,000 gun owners whose responses form the basis of the report. Sport Shooting and Participation in 2018 is a somewhat misleading title for the report, as some aspects of it provide a perspective of trends from 2009-2018.

Here are some outtakes from the report:

Among all shooters of all types of guns, target shooting increased 14.5 percent between 2012 and 2018. That’s a pretty big jump.

By contrast, hunting without target shooting is on a downswing of 12.2 percent. Hunters who also target shoot remained stable. It’s good news to know more hunters are practicing away from the field! 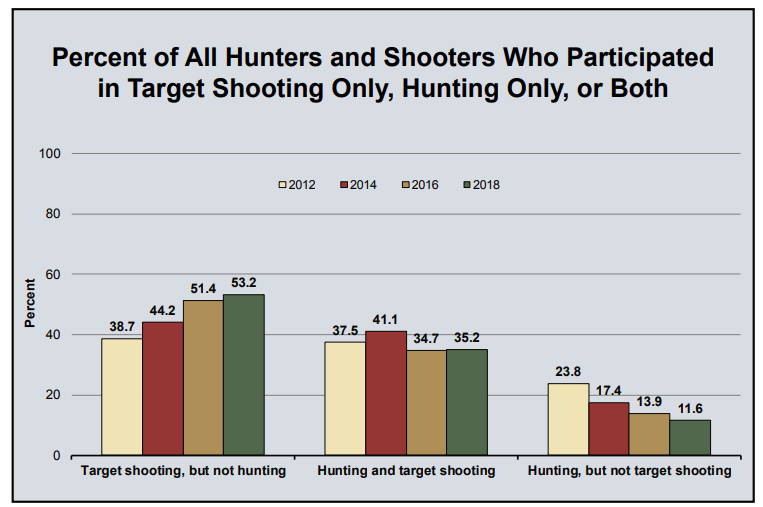 Americans love their handguns, or at least 16.3 percent of them do. That’s how many people went target shooting with their handgun in 2018. That’s a 14.7 percent increase within that group.

It doesn’t sound like a lot to say 4.9 percent of Americans went skeet shooting in 2018. But when we realize that means over 11 million people went to bust up skeet clays, that’s impressive! Skeet narrowly edged out modern sporting rifles for grown in popularity over two years, up 34 percent in 2016 and 2018.

To what or whom is the growth in popularity of skeet to be credited? Could it be that Olympic superstar skeetster Kim Rhode of California is attracting new shooters due to her leadership on and off the range? (Rhode once rightfully snapped back at then-Lt. Governor Newsom’s nasty tweet about where she could buy ammo under California’s choked-down ammo purchase regulations).

This instructor/writer is surprised to see respondents say they shot, on average, 12.4 times in 2018. Most concealed carriers who show up for their two-year renewal shoot tell me they’ve not fired their gun since they qualified two years earlier. Three-gun competitors practice more than any other group measured, turning in an average 23.8 days of rehearsal in 2018.

I’ll let this chart do the talking. 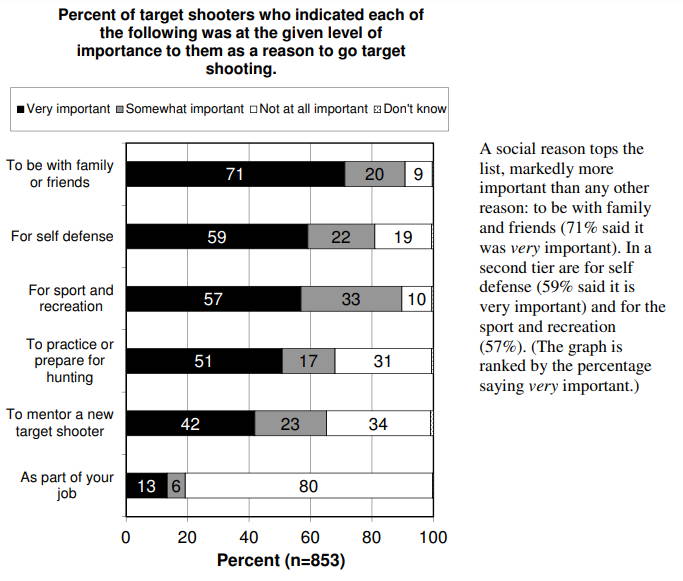 Of the respondents who’d been shooting in 2018, 15.6 percent started shooting five or less years before. Most newbies go target shooting with handguns or traditional rifles, and most are doing that shooting at an indoor range. Does the comparatively greater use of indoor ranges mean more new shooters live in cities? The study doesn’t say. 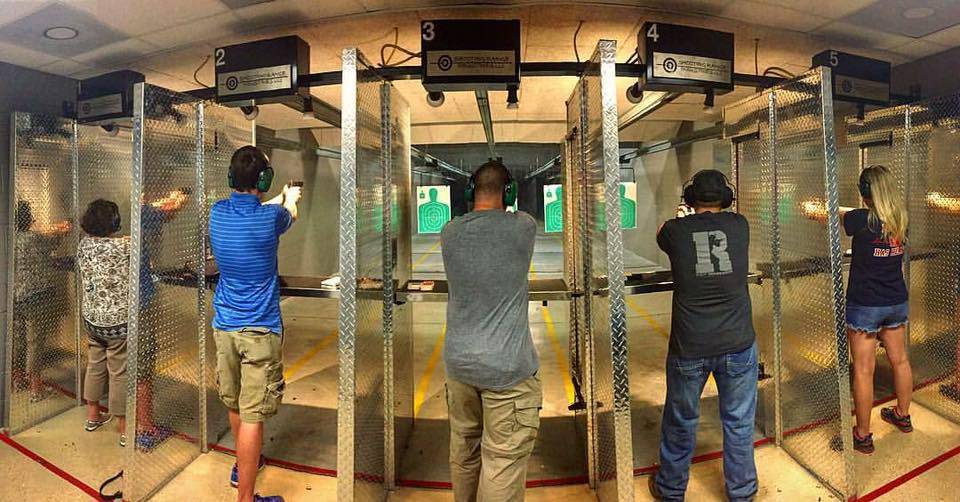 The study uses a proxy method to judge whether a respondent is leaving the gun community. By asking people who reported going shooting in 2018 who is “not likely” to shoot in the next two years, an assumption that they’re leaving and retrospective analysis of the demographics of budding non-shooters is made.

Perhaps it is surprising, since males make up most of the gun-owning community, that they are also being the first to go. Specifically, older males living in rural areas and small towns are the subgroup most likely to leave the shooting sports. Conversely, the data points to the profile of a new shooter as a woman, 18-24, who is an urban dweller.

To be considered a “non-traditional” shooter, a respondent had to meet at least four of the criteria in the left-hand column: 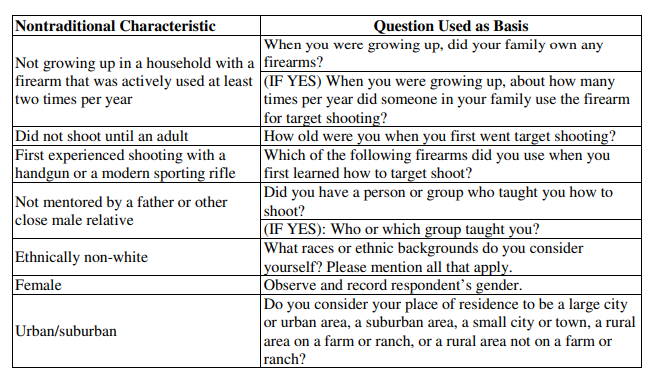 One interesting observation is that non-traditional shooters are more than twice as likely to do their target shooting at an indoor range. Perhaps this is a reflection of 17.7 percent of them residing in an urban area.

Among all shooters, men outnumber women and the northeastern US (as defined by Census boundaries) has the smallest percentage of shooters in the population. However, when new shooters are observed separately, 28 percent are women as compared to 11.2 percent being men. And 26.2 percent of new shooters reside in the northeast, while a little more than eight percent are from the west. The data does show that women tend to be one-time players in the shooting arena, whereas men tend to stay involved.

Do your experiences mirror any of the data discussed here? What do you think the reasons for some of these trends may be?

Watch Out for Heat Injuries During Training

Heat injuries can come on quickly, whether or not yo...

Pepper Spray: Should it Be Part of Your EDC?

To be prepared to use pepper spray effectively, visualize using it in different situations and develop a plan for how you will execute the best possible outcome.

Downloading Your Rifle Mags For a Different Reason Than You Think

Most of the time we spend with rifles is spent carry...