Home Invasion: Plan Ahead To Make The Best Of A Bad Event 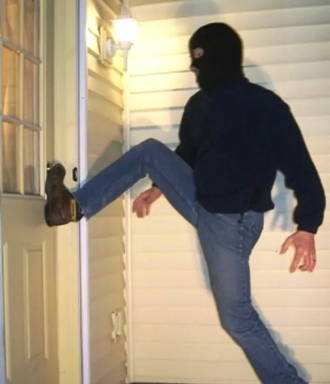 Home invasion--the uninvited intrusion of criminal actors into a home where people are lawfully present—is a dreadful experience. The good news is, home invasions are probably on the decline in the United States. The closest comparable crime, armed robbery, decreased by almost 25 percent between 2009 and 2014 according to FBI Uniform Crime Reports. While home invasions are almost surely on a similar decrease, they still happen, and it pays to be prepared.

Not limited to but especially in the community of concealed carry, statements of bravado about dealing with home intruders are common. The one I hear most frequently is some variation of “a deputy sheriff told me to shoot anyone who tries to get in and then drag the body into the house to make it legal when police arrive.” Yeah, right. As if these imaginary police have no forensic evidence training, as if the speaker is an always-perfect marksman, as if the speaker is the only one of concern in the household, as if the first armed invader didn’t show up with four armed friends. While there is powerful medicine in deciding to win a deadly force encounter before it ever happens, there is stupidity in making statements that have little basis in the reality of crime as it’s viewed in a court of law or as it really goes down. Let’s look at a realistic plan, with the intent of prevailing with innocent lives and legal justification intact.

An ounce of prevention

As a matter of habit, keep doors and windows to the exterior of your residence locked when you’re not using them. The reasons for this are at least threefold:

The first line of defense against home invasion is an attitude of acceptance that it can happen to you, and, when you’re not asleep, situational awareness. Since you’re still reading, I’ll assume the acceptance part is in place. Awareness while at home means having some level of vigilance to your home’s perimeter whenever you’re awake, and when possible, the ability to classify sensory inputs. Maybe your dog has a certain bark to herald the arrival of a stranger, versus the bark that celebrates the arrival of a trusted visitor. The “stranger bark” should immediately cause you to take some action to get a position of advantage. Sounds easy until it means arising from the La-Z-Boy when shaken from a Sunday afternoon nap. Settling into comforts of convenience at such a time is to choose victimhood. Get your feet moving. Chances are that bark is nothing to be concerned about. But if it’s not, the weight of knowing you could’ve done something to prevent harm to someone but chose laziness instead is very heavy. 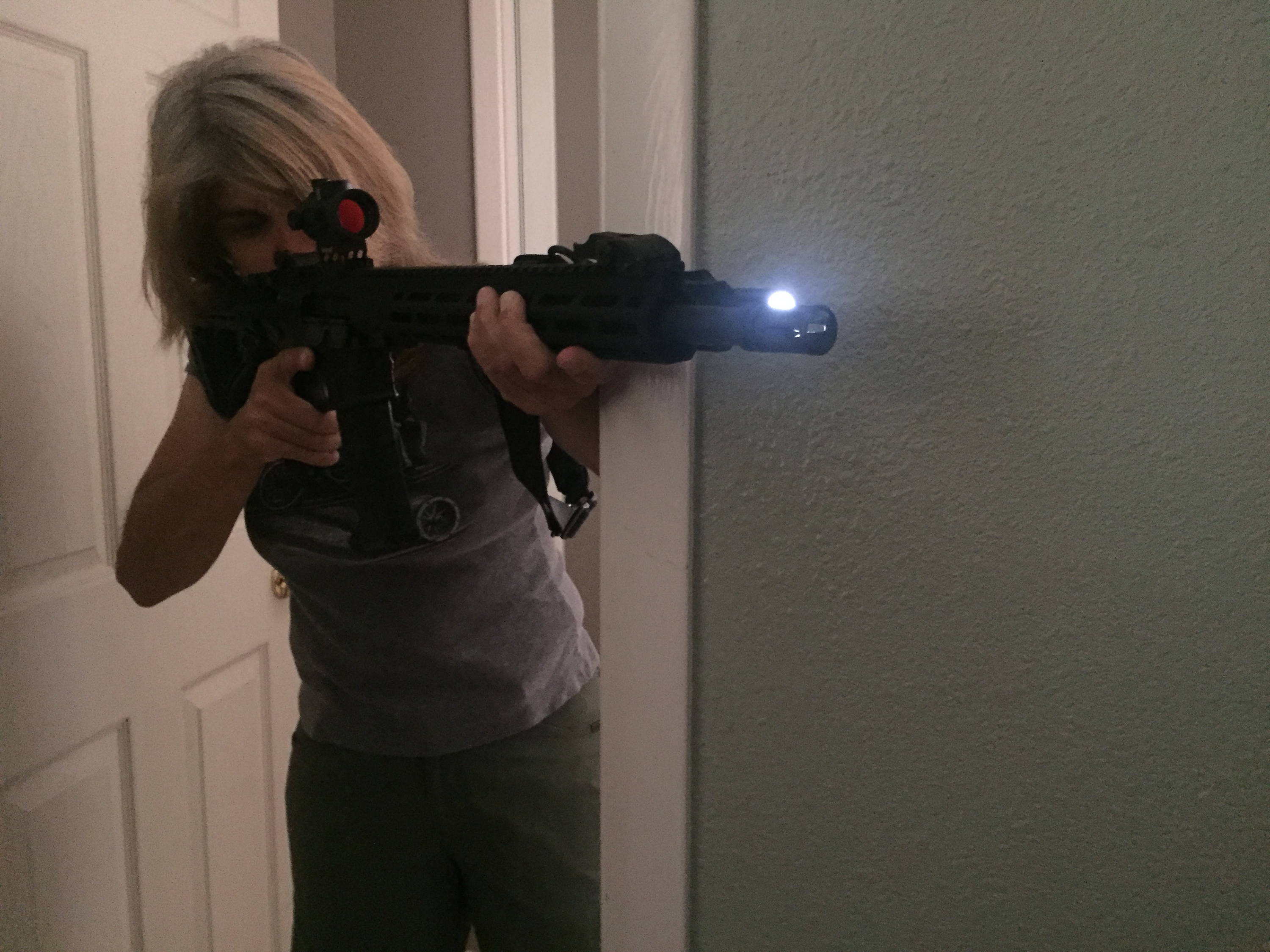 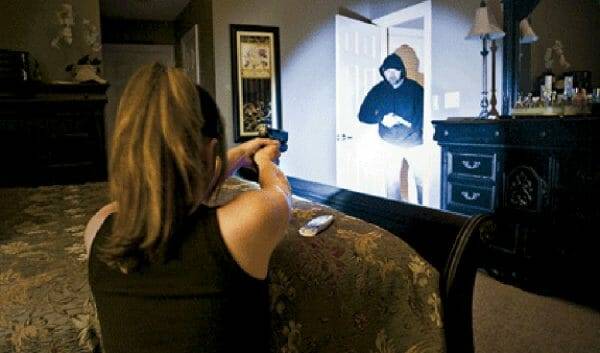 Identify and equip a saferoom

Having a saferoom—any space with as much bulletproof material around it as possible, even if it’s file cabinets full of papers—is a component of any good home invasion plan. This room is a place to gather family members behind at least one responsibly armed occupant. Consider having a code word to signal family members to retreat to this place. A saferoom should be equipped with, at minimum:

It is from the saferoom that law enforcement should be called, and kept on the phone for the duration of the incident. It’s smart to put the phone down, leave it on to document the incident on the recorded 911 call, so that you can tune your attention onto paying attention to the situation and neutralizing any threats to yourself or others in the home.

Use of the saferoom should be planned and practiced with family members. Adolescents with basic gun safety training have proven themselves effective in armed defense of themselves and younger siblings on many occasions. Exercise sensibility about your teen/pre-teen’s maturity and understanding of gun safety here. This area can also serve as a retreat during severe weather events if its construction is suitable for tornado or hurricane resistance.

Those who have the attitude “I’ll just shoot as soon as the perp comes through the door” may be legally justified in their jurisdiction, but there is never a guarantee said perp isn’t backed up by two or more armed accomplices. Exactly how many rounds are in your gun, and how accurately are you going to fire under severe stress from what will surely be a less-than-ideal position? A can-do attitude is admirable, but failing to assess the situation, the details of which will by their very nature be hidden from you, can result in you no longer being around to protect your home in the future.

Deadly force in your home

The saferoom provides space and time for you to evaluate the threat, prepare a good defense, and even time and space to give verbal warnings if possible. If an intruder keeps coming toward you or other family members after you’ve clearly said, “get out of my house or I’ll shoot,” the appearance of intent to harm---and your legal justification for using deadly force—is bolstered.

In my home state, there’s a man imprisoned right now on a murder conviction incurred when he shot someone who was fleeing down the street in his stolen ride. If “your” perp is fleeing from the home, be a good witness and document every detail you can—but don’t shoot! By contrast, if an invader is running away from you but toward a place where another relative is inside the home, shooting, even if it’s through the back, is within reason for many situations. Never fail to remember that bullets go through materials like drywall and paneling with virtually no resistance.

Identify likely points of access into your home by an intruder. Can you get to cover or concealment easily from where you spend most of your in-house time? Can you get to a weapon if it’s not on your person? What objects can be used as improvised weapons? (Hint: literally anything can, with enough creativity, but taking a spoon to a gunfight is never a good idea).

Are there locations in your home where, due to the presence of innocents in the next room or, in the case of mobile living, in the next RV or mobile home, you cannot safely shoot? Think about the target environment that you can’t see as well as the visible one.

Unless you’ve the misfortune of having false friends or extended family who are willing to cause you harm for any reason, you have the great advantage of knowing your home’s interior layout. But this is only an advantage if you’re willing to move through the space and not freeze in fear…the only categorically bad reaction!

If you spend a little time mentally rehearsing how and where you would find protection as well as launch a counter-attack in your own home, chances are you will win if and when the invasion occurs. This mental practice is like installing a software program. In an emergency, all you have to do is hit the “play” button, mentally speaking, to get your feet and hands moving in a way that serves you and yours.