How Many Rounds is Enough to Carry? 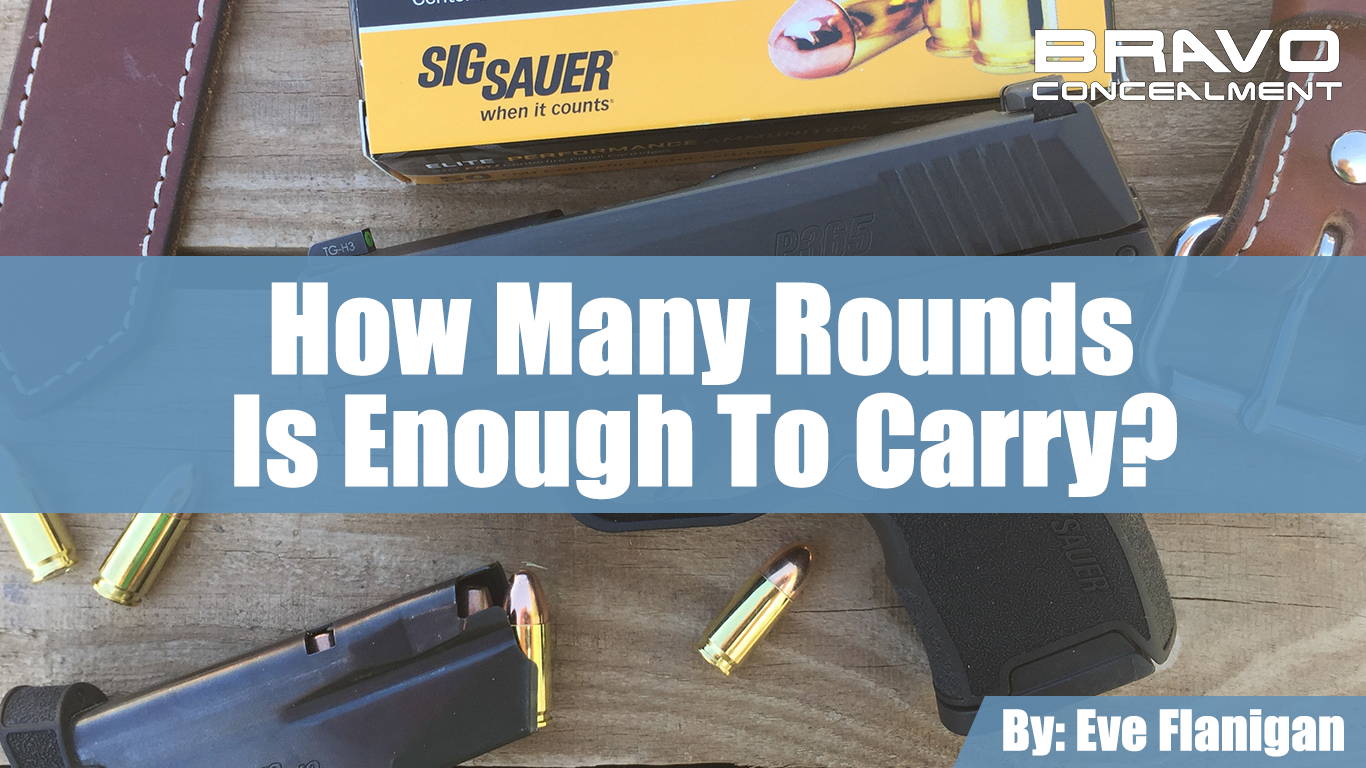 How much ammunition do you have ready to use when you’re away from home? Is your gun a five-shot revolver? Do you back up your handgun in the car with a semiauto carbine and at least a 30-round magazine? Or maybe you’re all about power, not quantity, and choose a Heizer Defense “Pocket AR” or “Pocket AK” with just one cartridge. Those of us living outside the notoriously gun-hating states and cities have lots of choices. But how much ammo do you really need on your person?

What the Data Says About Round Count

There is no reliable data devoted specifically to the number of crime-curtailing rounds fired by civilian defenders. The same is even true for police. Back in the 1990s, FBI statistics indicated an average of four rounds was fired by police officers involved in any shooting. For civilians, speculating about round counts is a slippery process. I consulted a trusted source, Crime Prevention Research Center (CRPC), and found a summary of incidents in which civilians with legally concealed guns stopped mass shooting attempts between 2015 and 2019.

The CRPC excludes nearly all cases of shopkeepers defending their business from this summary, to weed out over-representation of these common, mostly cash register-directed crimes. However, they did include instances when the clerk was a licensed concealed carrier.

With that research and with a look into the early 2000s, I found a range of rounds fired from one to eleven—with one incident citing “more than 15 shots fired,” not clarifying how many were from the perpetrator. Three rounds seems to be the typical number fired in defense outside the home. This may surprise some readers since the focus of the CRPC paper is mass shootings, the very name of which brings high round counts to mind. But remarkably, there has been great power of peace restoration in low round counts fired by good citizens in the last half-decade.

In the interest of completeness, let’s examine an outlier. By one account, 11-rounds were fired by the good citizen—a former policewoman named Jeanne Assam. She was at the time volunteering at her church as part of the security team. When Jeanne Assam heard gunfire one Sunday morning in 2007, she sought and found the source—a deranged male who escaped detection the day before when he murdered two people at a local mission. That morning, he had already killed two people outside the church and had gone inside, armed with both a firearm and explosives, with intent to kill more.

What Makes the Armed Citizen Effective in Stopping Violent Crime?

Assam’s 11 rounds traveled approximately 23 yards to land three hits on her target, which was also firing at her. The intruder was hit twice in the leg and once in a wrist, ending his two-day murderous rampage and his life. Assam’s training as a police officer, which likely included passing qualifications that included distance shooting, surely helped her that day.

In about half the instances when a civilian effectively ends a crime using their gun, said civilian has had advanced training at some point. Many are retired or reserve law enforcement officers. The willingness to face a deadly threat, and the skill to stop that threat with very few rounds, speak to the value of training and mindset.

These life-saving assets are not the exclusive domain of police officers. They are well within reach of anyone who cares to invest time and effort into training on the range, as well as putting in the time studying and practicing proper mindset.

What’s the Right Round Count for My EDC?

Most firearms instructors, present company included, love to encourage folks to carry as much ammo as reasonably possible. There is no guarantee that your defensive encounter will only need one to three rounds. If it does require 11, like Assam’s did, is that amount of ammo even on you day to day?

Much as I advocate the so-called sheepdog/protector mentality and ammo capacity to match, at the end of the day, this is a personal decision. Give some thought to your lifestyle—do you travel often to places known for crime or civil unrest? What is the rate of violent crime in your community? Are you a likely target of violence based on any personal, political, or job-related factors?

With an honest examination of the likelihood of crime coming your way, along with a personal assessment of how much ammunition helps you feel confident, decide what’s right for you. But first, take a listen to this story about Sgt. Timothy Gramins of Illinois, who’s an avowed carrier of 145 rounds after a shootout with one subject in which, during just the beginning of the gunfight, Gramins landed 14 hits on his assailant, six of those being fatal—just not immediately fatal.

Law enforcement stories like this one offer many examples of good and bad actors alike lasting, and fighting for, up to 12 seconds after being fatally struck. To me, that five-shot revolver is sounding pretty lame about now. But I’m also of the mindset, and in a profession, that can put me in harm’s way more than others who wisely view avoidance and escape as top options and whose daily activities don’t typically bring them into contact with hardcore criminals.

If you’re comfortable with the five-shot revolver, or the six-plus-one capacity of, say, a Glock 42 or 43, or Springfield XDs .45 ACP, that’s cool. It’s likely you’ll never need even that many rounds. But maybe you’ve been watching those videos showing a dozen rioters harassing an innocent couple just trying to enjoy a nice meal at an outdoor café in the middle of the afternoon. The threshold for use of deadly force with such crowds seems to get lower by the week. Maybe life places you in other situations that make you feel unprepared with so few rounds. If so, it’s time to upgrade your ammo capacity.

There are two ways to carry more ammunition: an extra source outside of the gun, and/or a higher-capacity firearm. Let’s examine the costs and benefits of each.

Extra ammo outside the gun 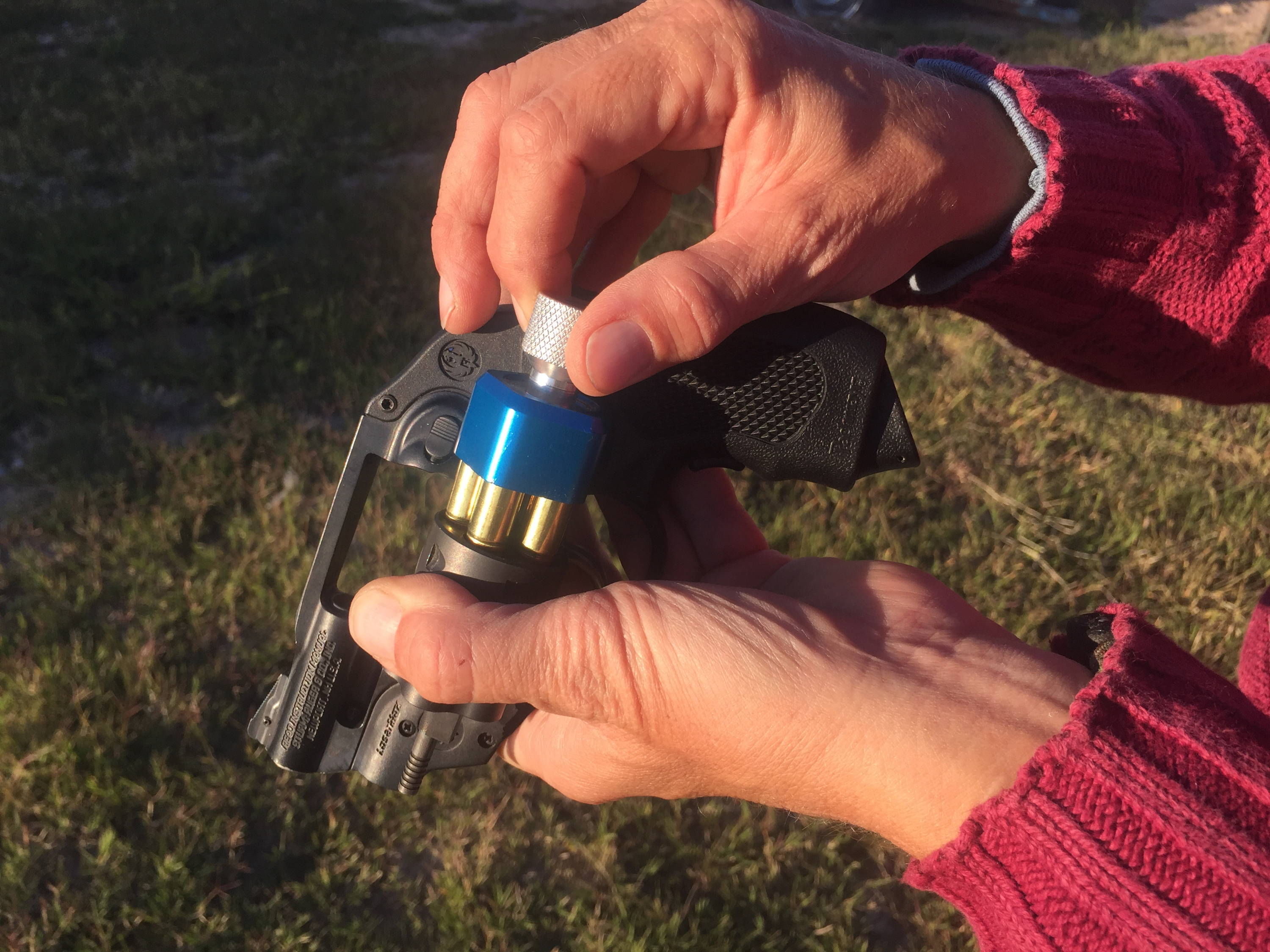 Carrying an extra magazine provides a source of extra ammo. If you’re in the habit of wearing jackets over belted pants, a close-fitting mag pouch such as any made by Bravo Concealment is a discreet method that keeps mags right where they need to be.

If you carry a model not served by Bravo Concealment or don’t have a covering garment, pockets are the next best place for a magazine. I most often carry in a cargo pocket, understanding that accessing the mag is slow compared to when it’s on my belt.

Revolver shooters can carry a cylinder’s worth of extra rounds on a speed strip, which offers discreet and compact carriage of extra ammo. A speed loader is another option, but creates a golf ball-sized lump in a pocket. Unless you’re Jerry Miculek, reloading any revolver is slow compared to reloading a semiauto. But having the option of reloading can lend peace of mind. 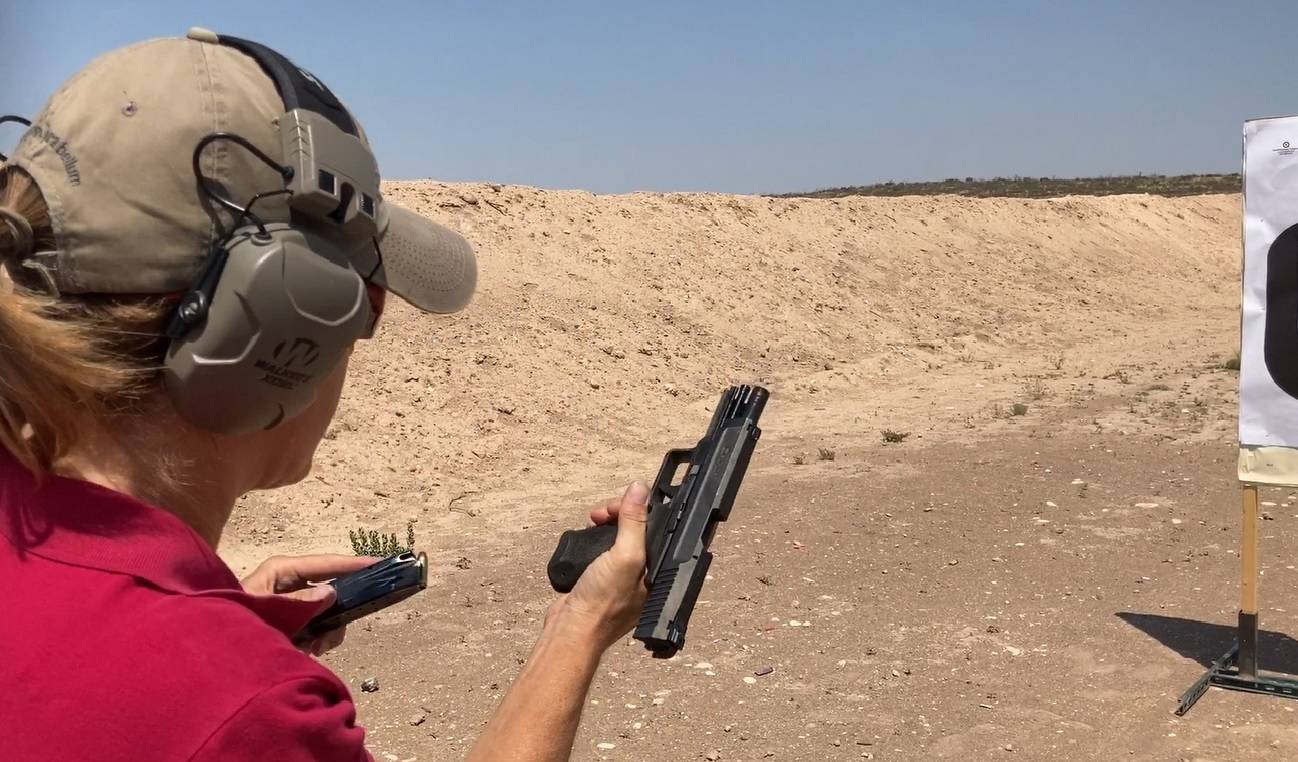 Carrying loose rounds in a pocket is obviously an option, but not recommended. Rounds too easily fall out. Concealed carry is supposed to be discreet. And taking time to load individual rounds is not a reasonable prospect in a gunfight.

Having extra ammunition can be an asset in a bad situation for obvious reasons. However, all the extra ammo in the world does no good if your reloads aren’t smooth and efficient. That is a training issue—and a discussion for a different article. 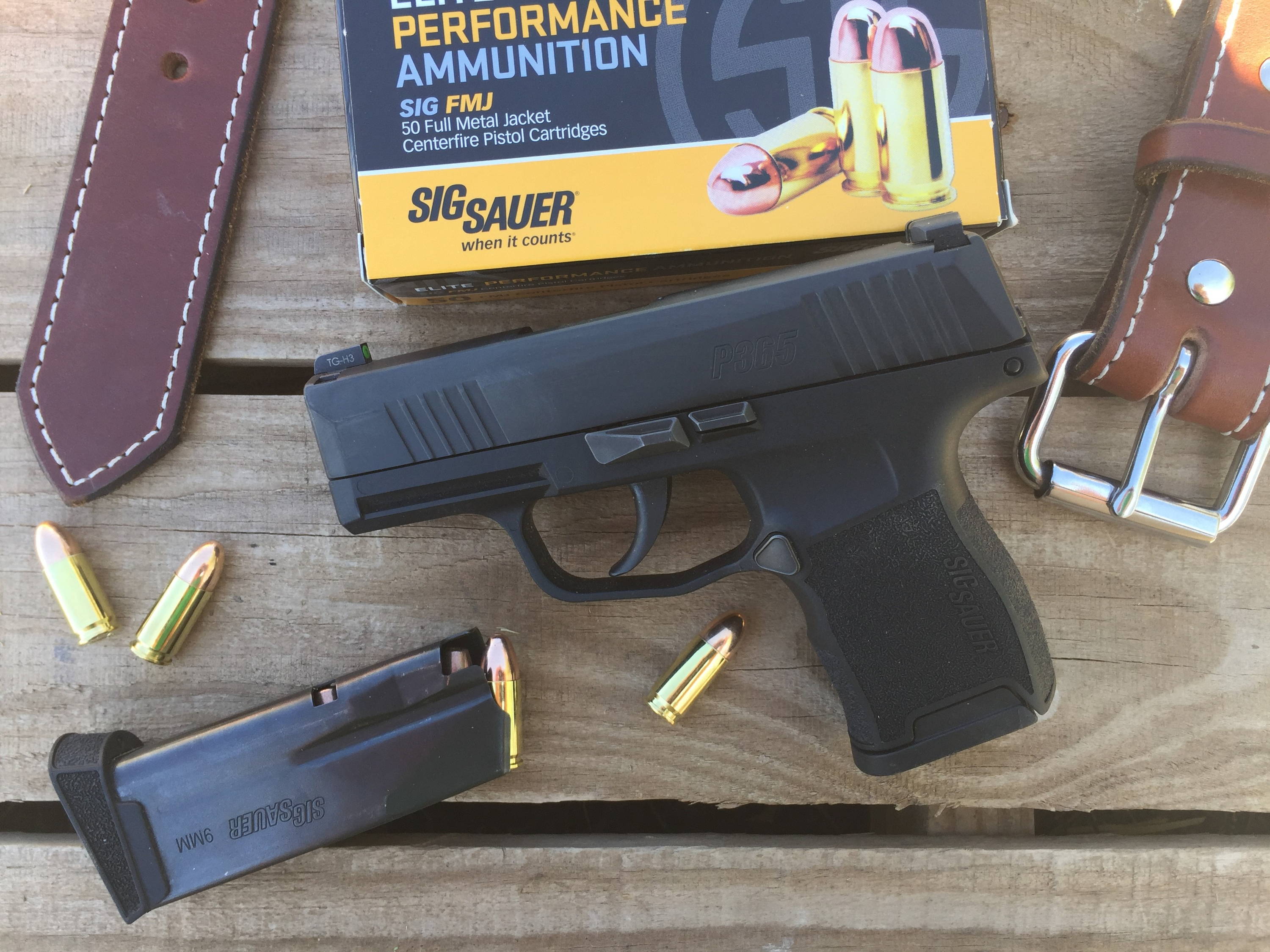 A couple years ago, the firearm industry finally began to answer consumer demand for higher-capacity subcompact guns. Choices like the Sig Sauer P365, Springfield Armory Hellcat, and Taurus G2C offer a minimum of “10 +1,” or a ten-round minimum magazine plus room in the chamber for one more.

These guns fill what many concealed carriers, present company included, desired for concealed carry. They pack what used to require a gun and extra magazine into a single gun that’s still very concealable. And with the still-compact mag in a pocket, it’s possible to have in excess of 20 rounds in comfortable, deep concealment.

Hooray for choices! Chances are, you’ll never need more than three rounds in a defensive encounter. But, as the saying goes, chance favors the prepared.