Loading pistol magazines can be a bugaboo for many people, even those who’ve been gun owners for a long time. Sometimes, people forget which way rounds are supposed to face in a magazine, and create a frustrating jam when the gun attempts to cycle a backwards-loaded round. And then there’s the act of loading a mag. Arthritis, injuries, or simple weakness can discourage shooters who find loading difficult or painful. This article provides resources for remembering which way rounds should face and ways to load that aren’t strength-dependent. After all, when magazines are loaded correctly, a lot more fun can be had actually shooting!

If you’ve been to an amusement park, you can remember which way rounds face.

This is silly, but you’re going to remember which way to install rounds into the magazine after reading it.

Take a look at a cartridge. Unless your rounds are wadcutters, the bullet’s shape kind of resembles the front car of a classic rollercoaster. Now, hold an empty magazine with the follower facing up. Notice the follower is slightly angled up.

Imagine that follower is the track on which your roller coaster car rides. It’s not in action yet; it has to climb up an incline (the follower, and then the feed ramp at the rear of the barrel) to get ready for action (traveling down the barrel and toward the target), right?

Using the roller coaster/track analogy, it’s easy to remember which way rounds face in a magazine. The bullet needs to be angled upward, so it’s ready for action. But if we take the cartridge and simply try to stuff it into the top of the mag, that doesn’t work, because the “lips” of the magazine are narrower than the cartridge case. So how do cartridges get into the magazine?

Loading the first few rounds is often easy. The spring that’s hidden in the body of the magazine, on top of which the follower is attached, is just barely compressed when the mag is empty or near-empty. There are a couple kinds of devices to help compress the spring and make rounds easier to insert. But first, let’s discuss loading magazines without using any tools.

To load the magazine without any device, grasp it in a fist with your thumb facing the open end. If possible, set the base of the mag on a solid, flat surface. Place your thumb atop the lower end of the follower or, if the mag is already partially loaded, on top of the already-loaded cartridge. Put downward pressure on it with your thumb. With the free hand, insert a round from the elevated end of the opening, being sure that the primer end goes in first. 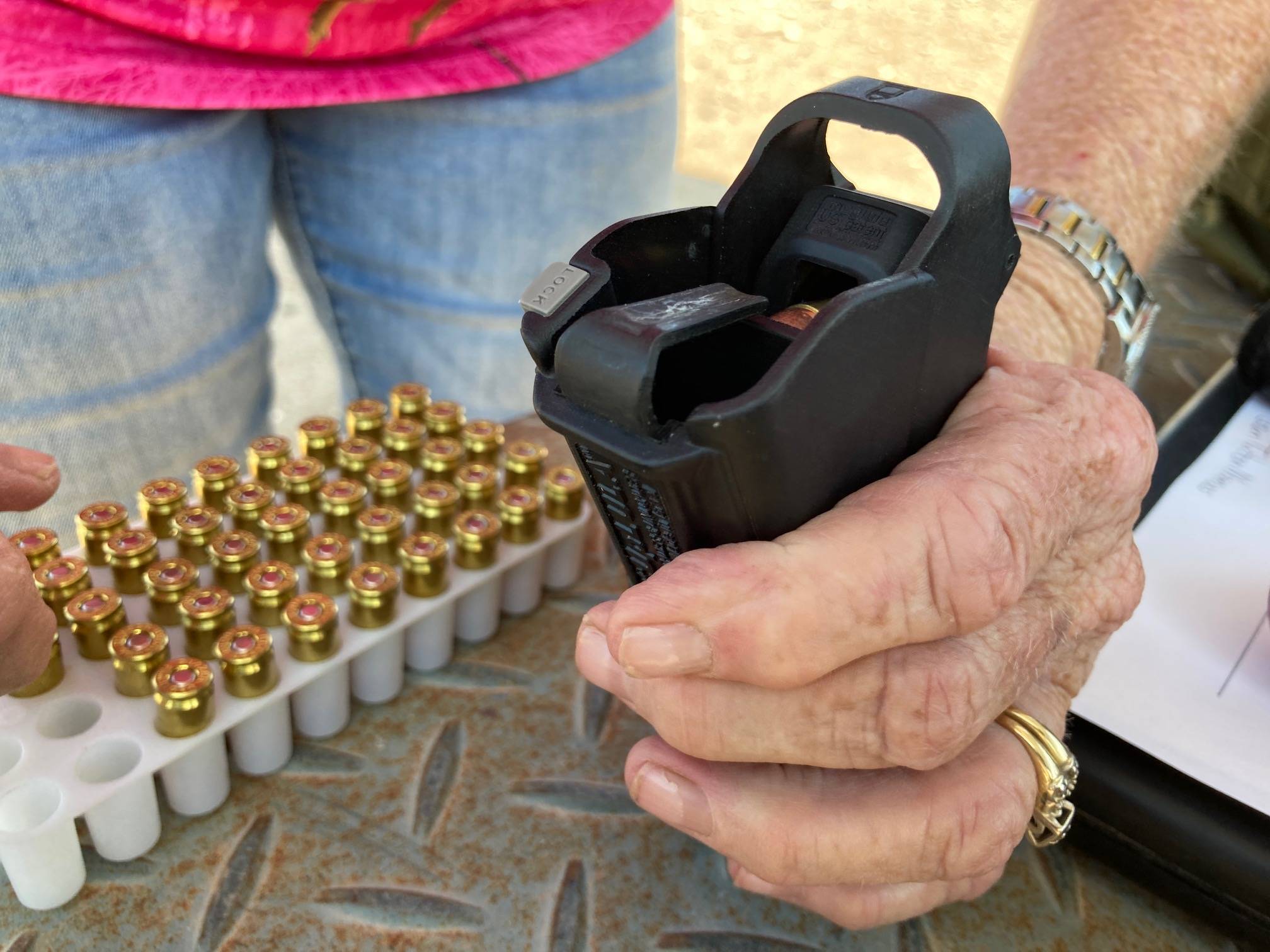 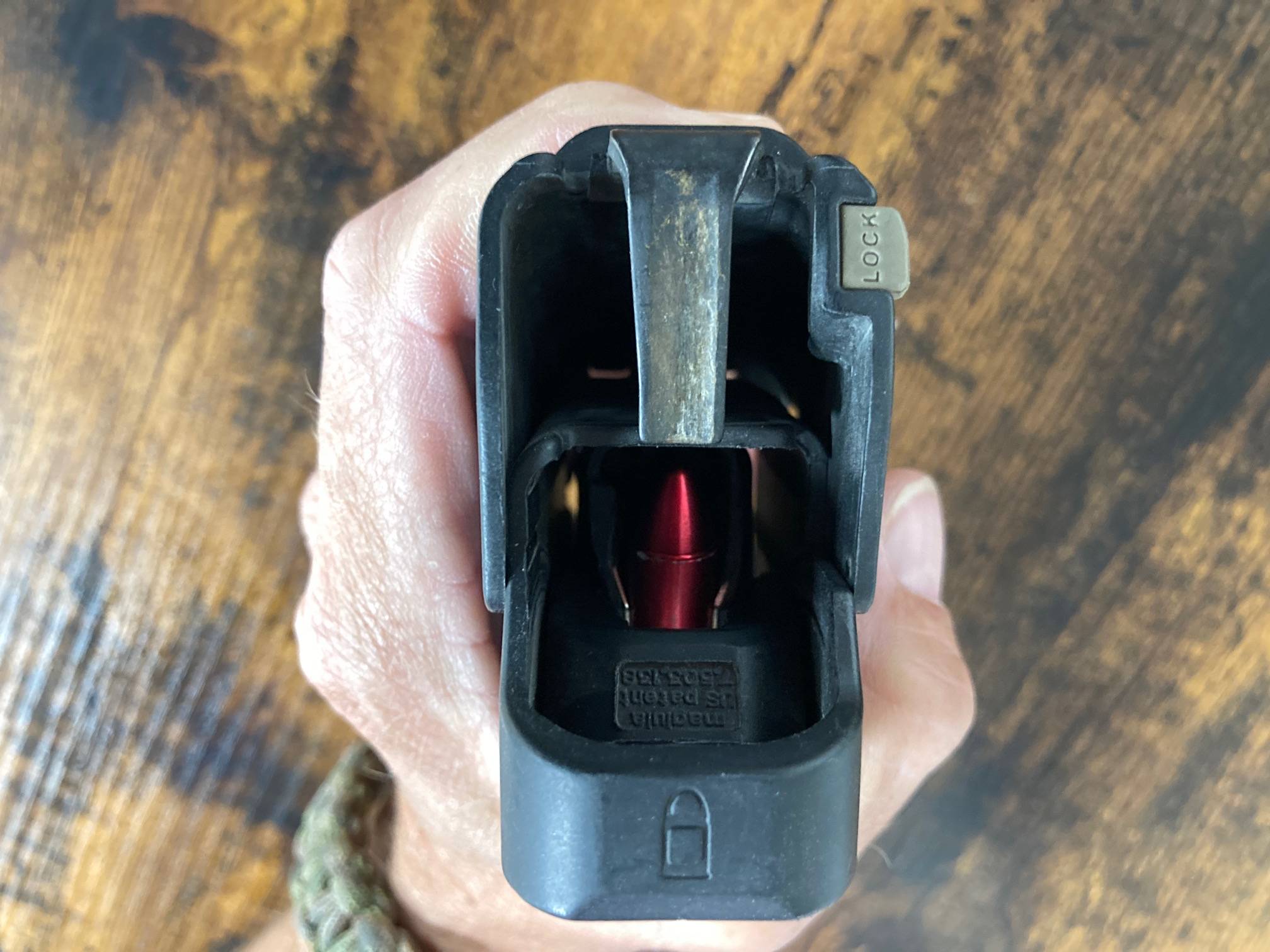 What about loading with an assistive device? Many new semi-auto owners have a loading aid that came with their gun. And there are other devices for loading, the best being the Universal Magazine Loader by Uplula. Using a loading device is easiest when the base (also called floorplate) of the mag is held flat on a table or, alternatively, a lap. I’ve often seen people put the mag against their beer belly—the more solid and flat the surface, the easier.

With the non-hinged, solid plastic device that comes packaged with many handguns, the wide opening is set over the top of the magazine. The side with a downward-facing flange should be toward the primer side of the magazine, AKA the downhill end of the follower. Press down. With the free hand, partially insert a round, primer end first, long enough to clear the inside edge of the loading device. Remove the device and finish pushing the round into the magazine. Repeat.

To use the Uplula Universal Magazine Loader, first be sure it’s in the open position. It will be in a slight V-shape, widest end of the “V” facing up.

With the magazine on a flat surface as previously described, place the Uplula over the top, with the flange facing the bullet, or higher side, of the follower. Do not let it settle on the magazine at all, though. Making a fist around the Uplula, squeeze it so the V shape becomes a rectangle.

Still squeezing, press down. The follower will move down. Place a round into the magazine. Then let go of the Uplula. Repeat.

It sounds complicated in written form, but this little device is a time- and hand-saver! It’s just fun to use, too. Lots of people love this device because it prevents hand strain and pain. Some like it because it won’t damage a manicure.

The Uplula can be locked into a rectangular shape for storage. It’s easy to lock it unintentionally. Usually when this happens, new users think it’s broken. Lifting the small tab at the top will unlock it.

This handy device is well worth the purchase price, usually $25-35 depending on the source. It comes in many colors and equipped with a keyring that makes it easy to attach a loop, keychain, or other handle. I put a bright green plastic coil on mine which makes it easy to hang out of the way at the range, and makes my black loader easy to find in my overstuffed range bag. It is by far my most-loaned bit of gear, as well as the one most likely to garner the comment, “I need to get one of these!”

Whenever possible, load your own magazines. Whether it’s someone who has to use a loading tool because of advanced arthritis, or a new-to-guns female who’s always accepted an already-loaded magazine from her shooting partner, I have never failed to see a smile on the face of a shooter when they master loading their own magazines. Doing so is part of the meditative sort of relaxation that range time brings to our day. It is an act of empowerment for new and female shooters to discover they can load their own magazines. It lends peace of mind for a gun owner to know he or she doesn’t need help to load a magazine in case the person who usually does it for them isn’t around. Do not neglect this simple but fulfilling and basic skill of gun handling.