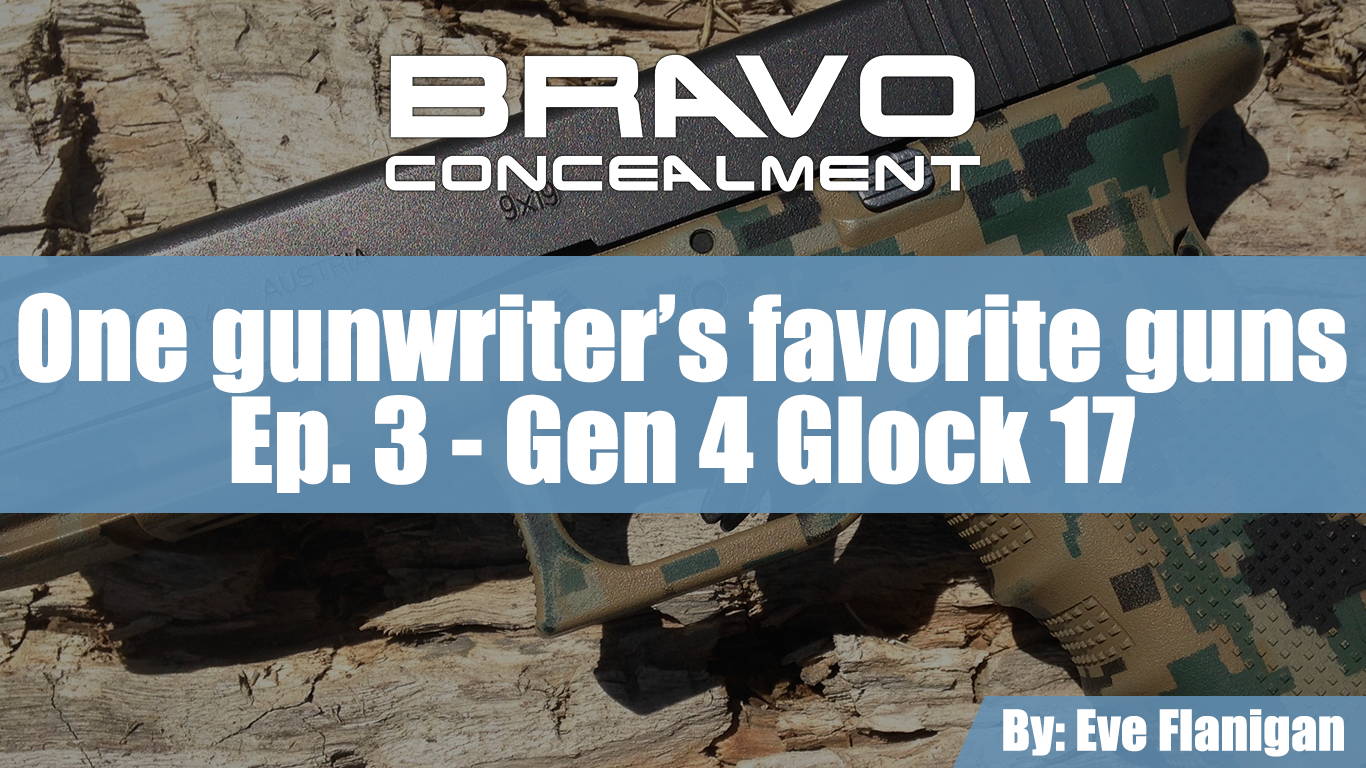 I really didn’t want a Glock. They’re ugly, I thought.

It was 2012. I’d become mostly competent on my EDC gun, a full-size Springfield Armory XD-40, an early example of today’s striker-fired guns. But it would soon be time to attend the venerable Pistol 250 course at Gunsite Academy, and every picture I’d seen of founder Col. Jeff Cooper showed him shooting a government-size 1911. So I bought myself a fancy full-size Kimber, thinking I’d be right at home with it there.

Much to my surprise, most Gunsite instructors were carrying Glocks. I don’t regret the hours logged with that Kimber .45 ACP (which, after about 10,000 rounds, developed a nasty tendency to not cycle reliably). But today, with eight years of my own shooting, learning, and teaching since that class, I’ve come to understand why Glocks have a ubiquitous presence there, in the law enforcement and military realms, and among the public. And I’ve developed a special fondness for the Glock 17, specifically the Gen 4.

Sometime between taking Pistol 250 and months later, Pistol 350, I’d purchased a proper Glock, choosing the G17 for its generous capacity and compromising a little on my “pretty is as pretty does” philosophy by selecting one that has a professional Cerakote finish in a digital camo pattern. I no longer think Glocks are ugly, but like a proud parent (fair game if you call me out for violating yet another bit of my own philosophy---never be emotionally attached to your equipment), I think mine is a little bit prettier than most. In case it doesn’t go without saying, with the G17 I found myself shaving time off every exercise and enjoying shorter gaps between rounds thanks to reduced recoil compared to the .45.

In this article, I’m using the 9mm G17 as an example though Glock of course makes other caliber models in the same frame size. The G22, 20, 21, and 31, chambered in .40 S&W, 10mm, .45 ACP, and .357 Sig, respectively, share the same traits. But since 9mm is common, inexpensive, and the 17 offers the greatest mag capacity at 17 rounds, it is a personal favorite and represents an accessible choice for most. 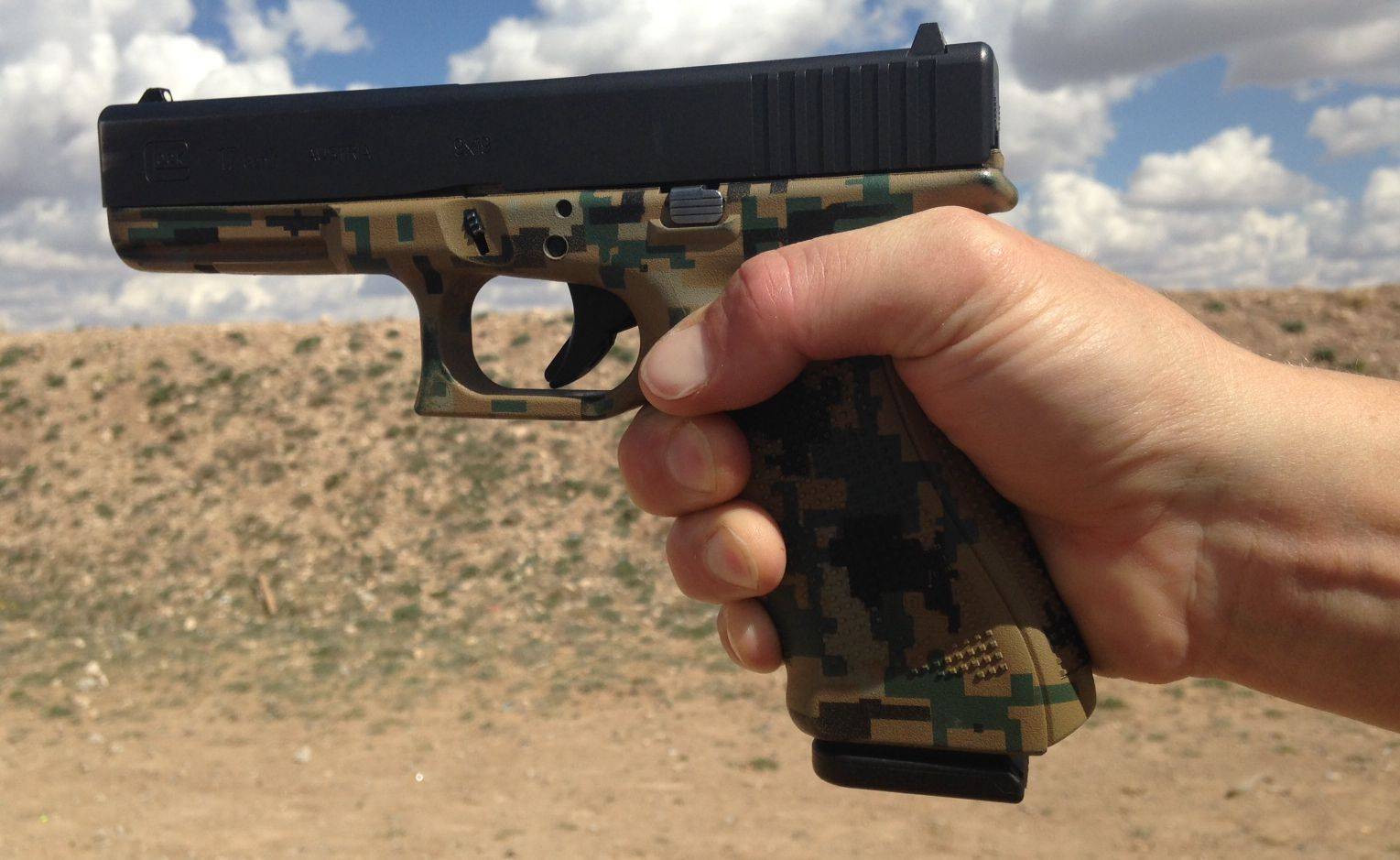 Proven internal and passive external safety measures equal no need for safety buttons, levers, etc. that I must operate. Draw-and-fire simplicity is a potentially life-saving feature in a duty or personal protection gun. We buy these tools to use in an encounter that will likely transpire in less than five seconds. I don’t want to be fiddling with a safety lever in that timeframe.

I was pretty confident in my abilities with that Kimber when I got home. The weekend after the 250 class, I entered a local USPSA match. Sometime during the third stage I drew to fire, pressed the trigger, and nothing. A second of puzzlement later, I came to the humbling realization that the “muscle memory” about disengaging the safety, which I’d been so sure of, temporarily took a leave of absence under the stress of a timer and competition. I consider this one of the cheapest gun self-defense lessons I’ve ever been handed.

Glocks (and many others of their ilk) are also simple to take apart, clean, and re-assemble. Like me, you probably have a list of things you’d rather do than clean guns. Simple is better, as far as I’m concerned!

That Kimber cost more than twice what my G17 did, and became quite unreliable. The grip safety on my XD disengages about 20 percent of the time, thanks to my hollow-shaped hands. Even though it’s passively operated, grip safeties have earned disdain from me though others with meatier hands may never experience a problem.

As an instructor, I rejoice a little inside when a student shows up wearing a Glock. I know it’s just going to work, even if it’s dirty or brand new and never oiled.

As a self-protection practitioner, I feel there is nothing more important in a firearm than knowing it will go “bang” each and every time the trigger is pulled and the chamber is hot. With a Glock, that’s covered.

Here is where I wax G17-specific. Though a Glock 19 is smaller and easier to conceal, the G17 grip is the easier fit for smaller hands, and thanks to the inclusion of modular backstraps with and without beavertail flanges, also fit large and/or robust hands as well. Yep, this is counterintuitive, so much that, more than once, I’ve had to put the two models on top of each other to demonstrate it to non-believers in the law enforcement community. 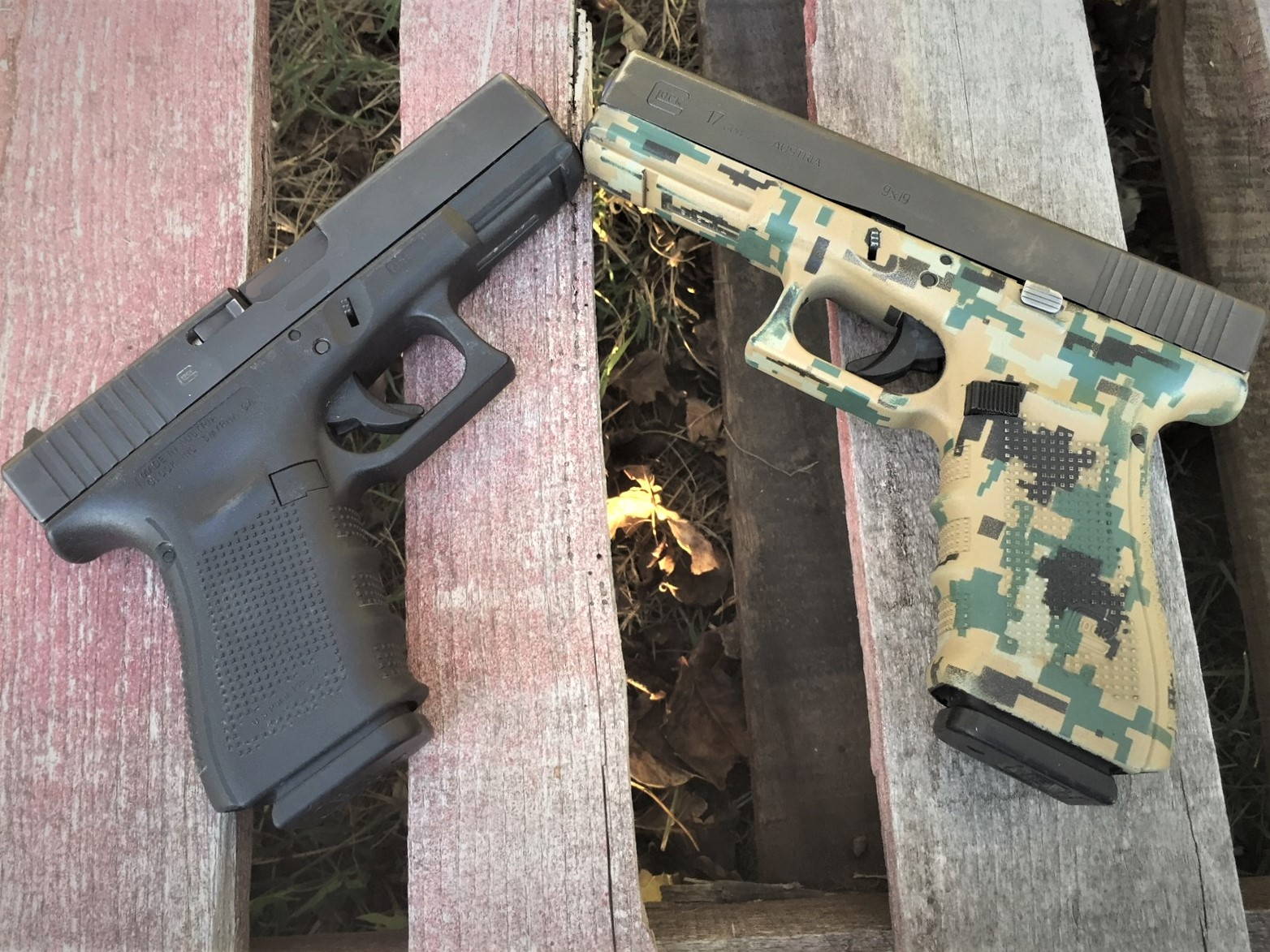 Here’s why the fit is different---the trademark swell on the posterior of a Glock grip is present on all their guns, but is placed farther down on full-size models like the 17. On the compacts, the hump is higher up, and effectively pulls the lower half the hand farther away from the center of the gun. For the short-fingered and small-handed, this means a longer reach to the trigger and less recoil control.

I keep a G19 around because so many students want to try one, and because I test a lot of gear. Because it’s so common, it’s often the first model that new holsters and other gear are made to fit. But it’s one of the harder guns in my collection for me to operate because the prominent hump makes the gun essentially too big for my hand.

My G17 spends more time in the safe than on my hip compared to my other favorite range guns---a Canik TP9 SA, Canik TP9 Elite Combat, and HK VP9. Why? It’s still slightly large for my medium-size hands. It still has Glock sights on it. The polymer sights have served me well since adjusting the windage for a more-right point of impact, as I’ve had to with all my own Glocks and those of many students’ too. This hasn’t been the case with other brands, eliminating shooter error as the cause. When other brands usually come with superior sights out of the box, why not use them?

Finally, there are those pesky finger grooves. They don’t bother me, but they do many others whose digits don’t match them exactly. Of course, Glock eliminated the finger grooves in Gen 5 but sadly changed the mags as well. A Gen 4 accepts all previous generations’ magazines. This may seem a minor detail, but when dealing with a fairly large number of Glock-shooting students, some of whom show up with annoying 10-round magazines or only one magazine, it’s nice to be able to toss extras around without concern.

Thanks to stellar reliability and ease of handling, the Gen 4 Glock 17 will continue to enjoy a secure, if not top spot, in my stable of range guns. 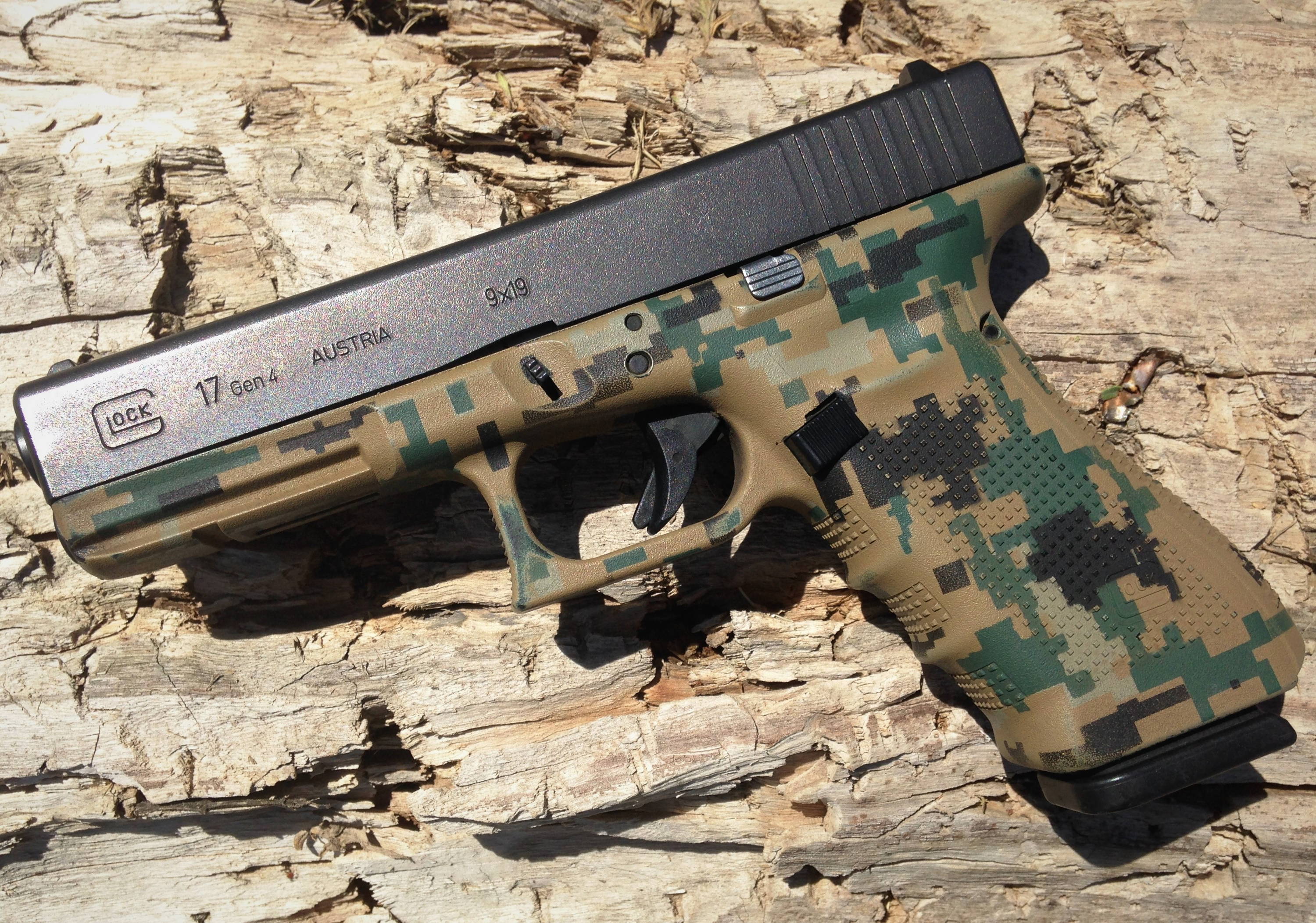