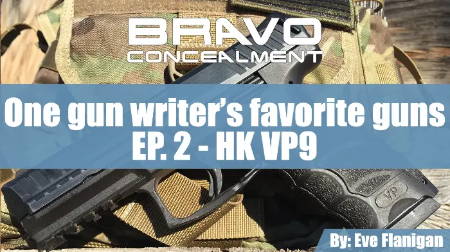 Venerable gun maker Heckler & Koch, of Germany, designed the first striker-fired firearm. It’s a bit odd that they didn’t unveil their first modern striker-fired handgun until 2016, when other major manufacturers were well into second and third renditions of their initial striker-fired creations.

The VP9 was big news when it broke. It still is, for good reasons. But, unlike the Canik TP9 SF I spoke of recently, I feel it falls short of perfection on a couple important points. 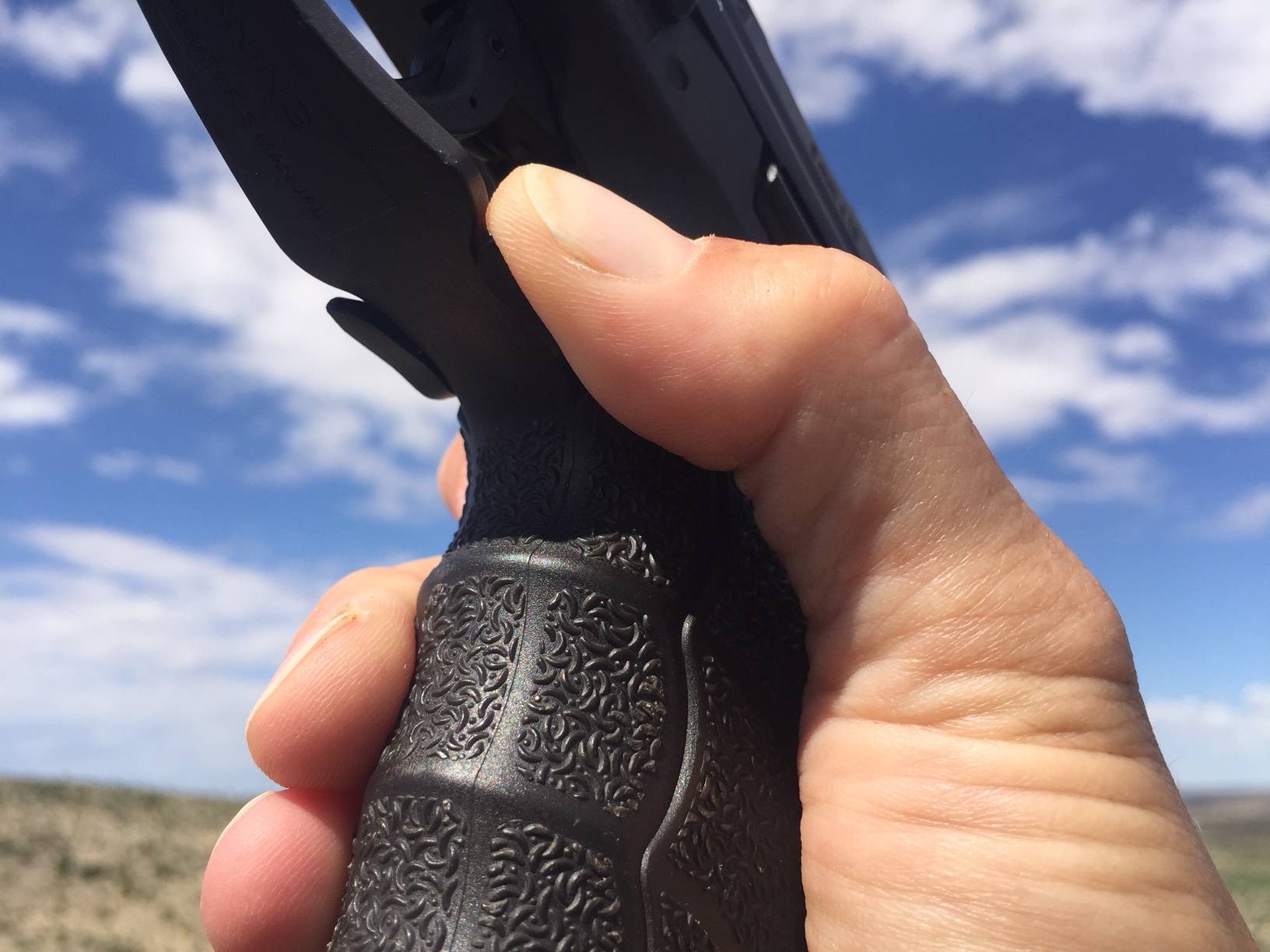 If HK (now with a plant in Georgia) had asked me to name the VP9, it would’ve been the UF9, for user friendly. In an era where interchangeable backstraps are the norm on polymer-lower guns, HK went a step further and included modular side panels. The lateral and rear sides of the grip each have three choices of panel, with the smallest options being truly flat and thin, and the largest adding both distance and fullness to the grip. The panels are rather easily changed but have stood the test of time, never once coming apart or even accumulating gunk despite being used in both dusty and muddy environments. At the top/rear, the grip’s “throat” is quite concave, making effective recoil management almost a given and allowing for a comfy, short reach from grip to trigger for almost any size hand.

Great ergos continue beyond the grip. The VP9 has a long, easy-to-reach slide lock on both sides of the slide. This, along with the ambi magazine release, make this gun a perfect fit for many left-handed shooters as well as the countless people who have short or painful thumbs.

A little unique in a lot of ways

I’m not here to get into chicken/egg arguments, but it doesn’t take a genius to observe numerous design similarities between the VP9 and Walther’s PPQ designs. This includes the European-style paddle magazine release, which bears no penalty for being all ambi, all the time, thanks to being covered by the trigger guard! In apparent response to consumer demands, HK now offers a more traditional button magazine release too.

In addition to my own VP9, I have two regular students who train with this model. Between these three guns, the slide consistently closes and loads the gun when a new magazine is slapped into the well. It’s a reliable “behavior” of the gun and one that makes operation a tad more efficient.

Unlike any other model I know of, the VP9 sports a vertical slot on each side of the slide near the rear. Included with purchase are fillers for those slots; tiny polymer “ears” that supposedly aid in racking. I have not found these to be useful, but keep them on the gun in order not to invite dirt accumulation in the slots. 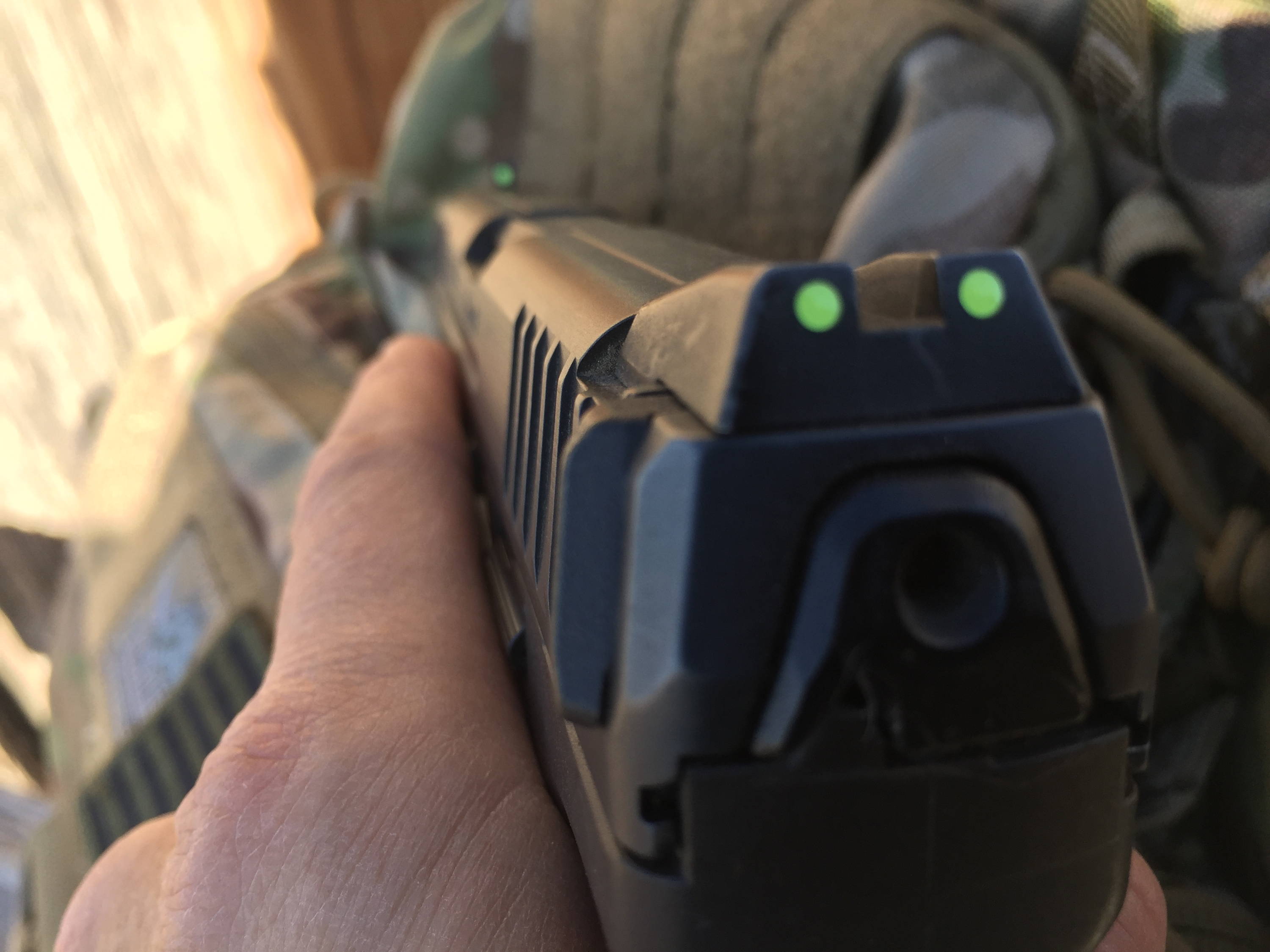 Another standout trait is the stock night sights. But alas, they are not the tritium most of us know. The three-dot system utilizes a phosphorescent material to achieve a light green glow in dark conditions. The more sun exposure the gun has in the preceding hours, the brighter they glow—so bright that a colleague once blamed my VP9’s sights for distracting him at a night shoot. They don’t ever “go out,” but the generous exposure of the rear sights as compared to the front can make for a dimmer front sight when the gun’s been in a holster all day. Still, these sights are far better than no night sights at all! For those who can manage to conceal a VP9, the sights are made with a snag-resistant, rounded-edge shape.

For its size, the VP9’s Magnum Research magazines should hold more than 15 rounds. Two mags are included with purchase. These are some of the priciest magazines on the market, with the lowest price being $50.

The VP9’s trigger is very good, if not excellent, in my estimation. It has a moderate amount of slack, a distinct wall that offers about 1/16 inch of grainy texture, and a predictable break. It has a clear reset point that puts the trigger back to the true wall, unlike some others that offer a bit of slack after reset. Its travel in the slack phase is silky-smooth.

With good operation and a break around the five- pound mark, the trigger is suitable for both advanced and beginner shooters. It’s a pleasure to use, but my copy has not aged well. The trigger has developed an annoying two-click reset. It goes unnoticed in rapid shooting but has tricked me a few times, thinking it was reset though it wasn’t when firing slow, precision shots. Having fired many slow-fire groups from 25 yards, I’ve also come to realize the break is not as crisp as I believed after focusing on timed fire. It’s still a better trigger than most in its class.

My VP9 and I get along great for combat-style shooting, including my state’s law enforcement qualification which includes center-mass shots from 25 yards. However, our relationship is difficult when it comes to distance precision work. I have logged some of my worst scores on the 700 Aggregate drill, a 60-round course of fire that’s entirely from 25 yards (ok, meters officially) on a six-inch bullseye. I think the barrel could be better, as I can pick up my trusty Canik pistol and post a better score on any given day. It’s plenty accurate for anything I do except that drill. 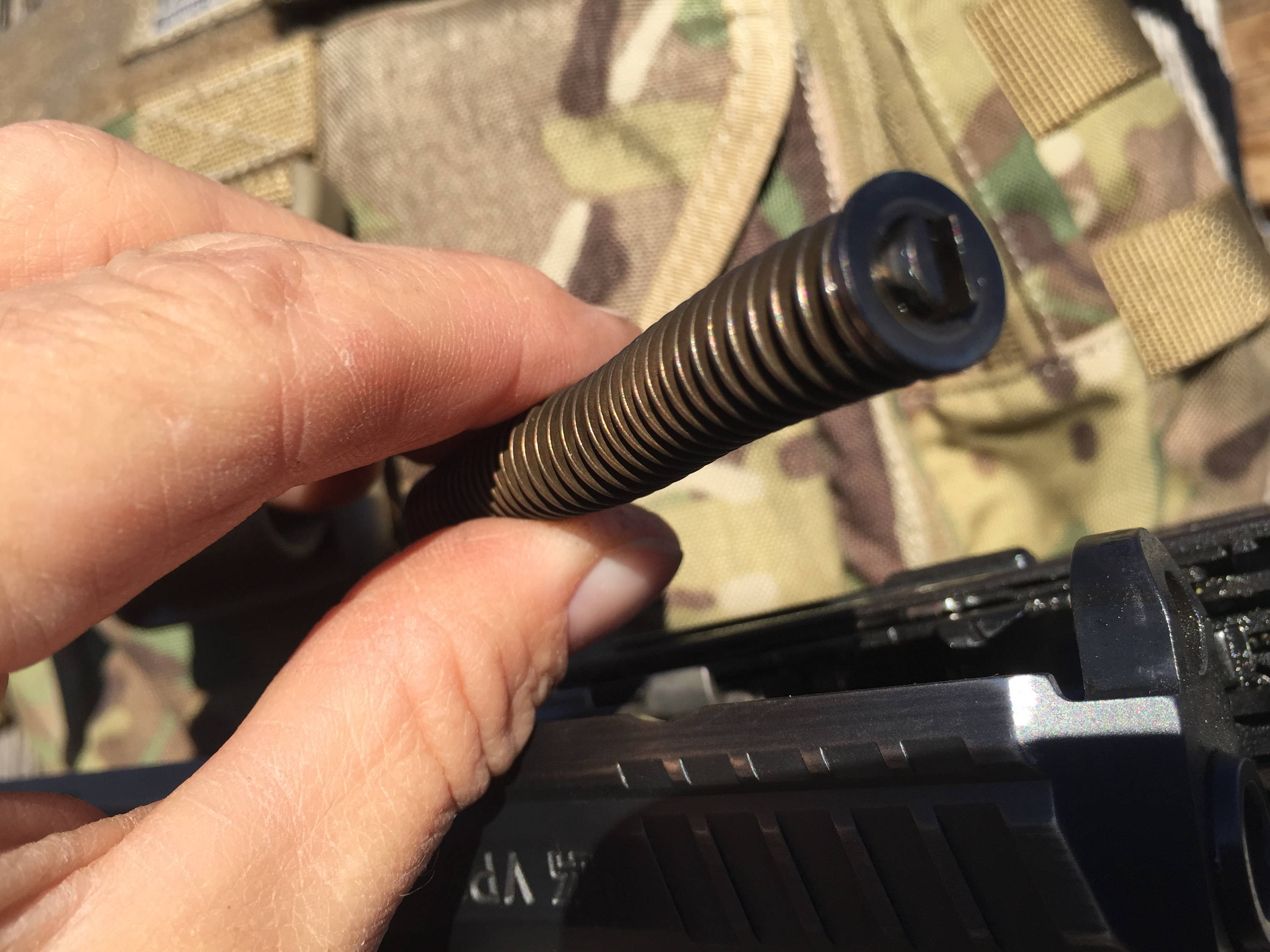 In approximately 10,000 rounds cycled, my VP9 has logged exactly one malfunction, a simple misfire that may well have been the ammunition I was using. I use only factory brass- or aluminum-cased ammo in it. In term of reliable cycling, it’s among the best.

At approximately 5,000 rounds, an odd event happened. The recoil spring, which is secured by a screw onto a metal guide rod, flew apart when I disassembled the gun. This is not an easy fix compared to many striker-fired pistols. HK said they couldn’t simply mail me a new spring assembly; I’d have to send the old one in. While that was inconvenient compared to replacing, say, a Glock recoil spring, HK had a replacement in my hands, free of charge, within 48 hours. Talk about fantastic customer service! This is where the company is a standout.

The VP9’s popularity has led to an abundance of holster choices. This alone represents value; anyone who’s had a gun that only fits in a generic holster can relate.

Compared to its nearest cousin, the PPQ, the VP9 is a good value, generally selling in the mid- to high-$600s. Expect the Tactical model and .40 SW model, the VP40, to be more. Still, I believe HK could do better with magazine pricing and for the price, could include tritium rather than phosphorescent sights. But this is one gun I keep going back to when another is on loan or sidelined for whatever reason. It’s earned my confidence that I’ll go “bang” when I press the trigger, and its easy controls take very little re-training to achieve smooth operation. 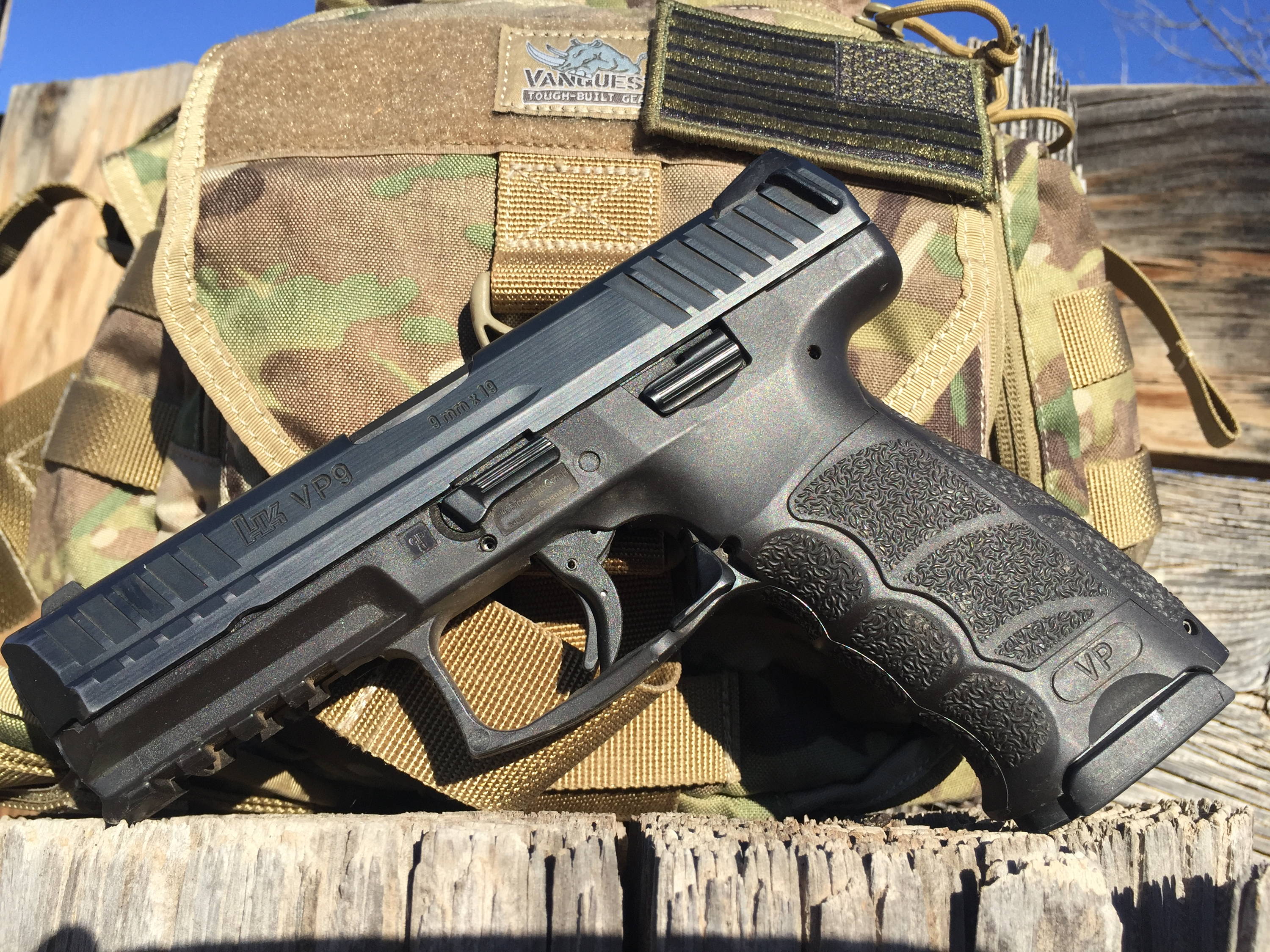