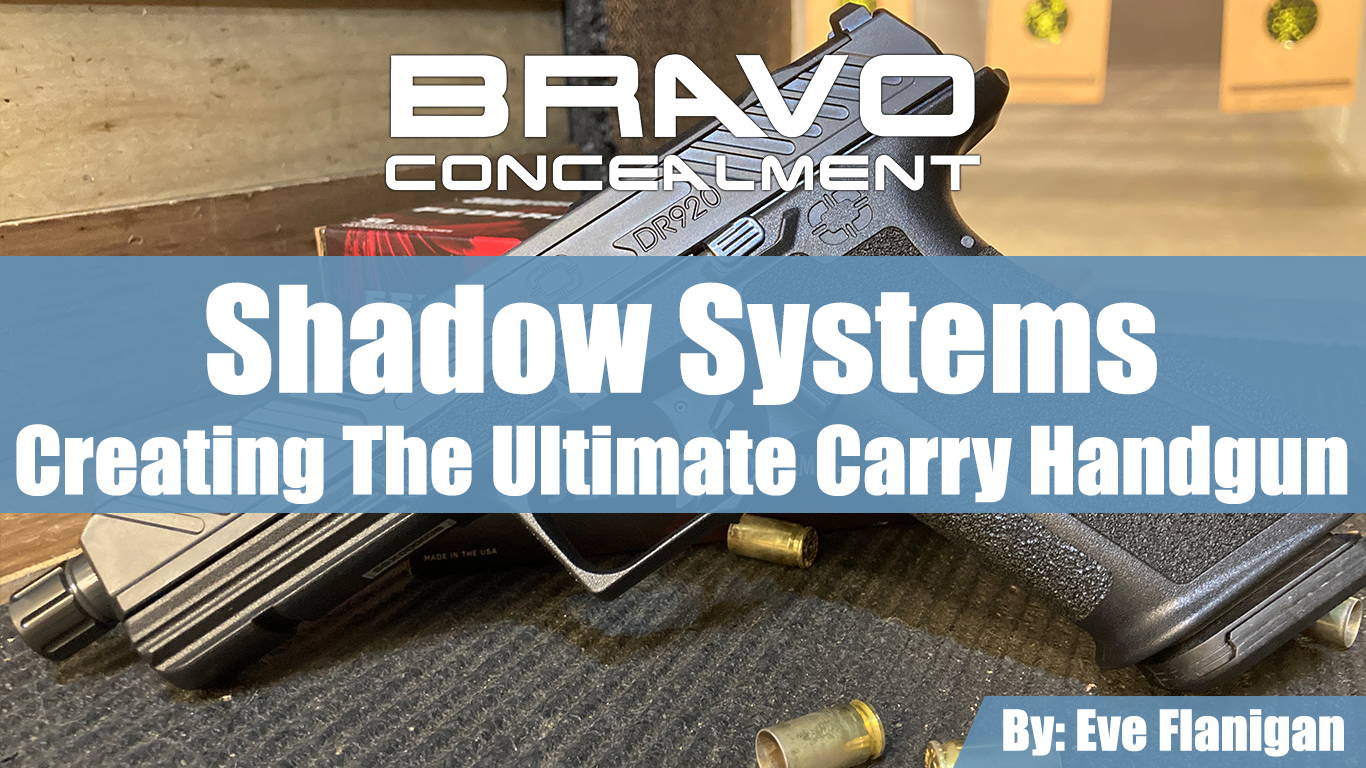 Recently, I had the chance to hear from Trevor Roe, a record-setting USPSA shooter and former infantryman who’s now CEO of what is perhaps the nation’s most forward-thinking handgun maker, Shadow Systems. His company is based in Plano, Texas. Shadow Systems presented several pistols for examination at the Blue August Gun Writer’s Conference in Dallas in October 2020. I was one of the dozen or so writers in attendance who got a chance to see, and shoot their products.

At first glance, pistols in the Shadow Systems five-model stable look more like “race guns” than anything. Flared magazine wells, slide cut-outs, flat-faced triggers, and prominent slide serrations on a polymer frame give an apparent nod to the competitive history of the co-designers. Threaded, glossy barrels with high-tech finishes might lead one to think these are high-dollar handguns for people who like some flash. But the unmistakable Glock-esque profile is perhaps the strongest hint about this radically different, yet somehow familiar handgun. It’s built to shoot, without fail. 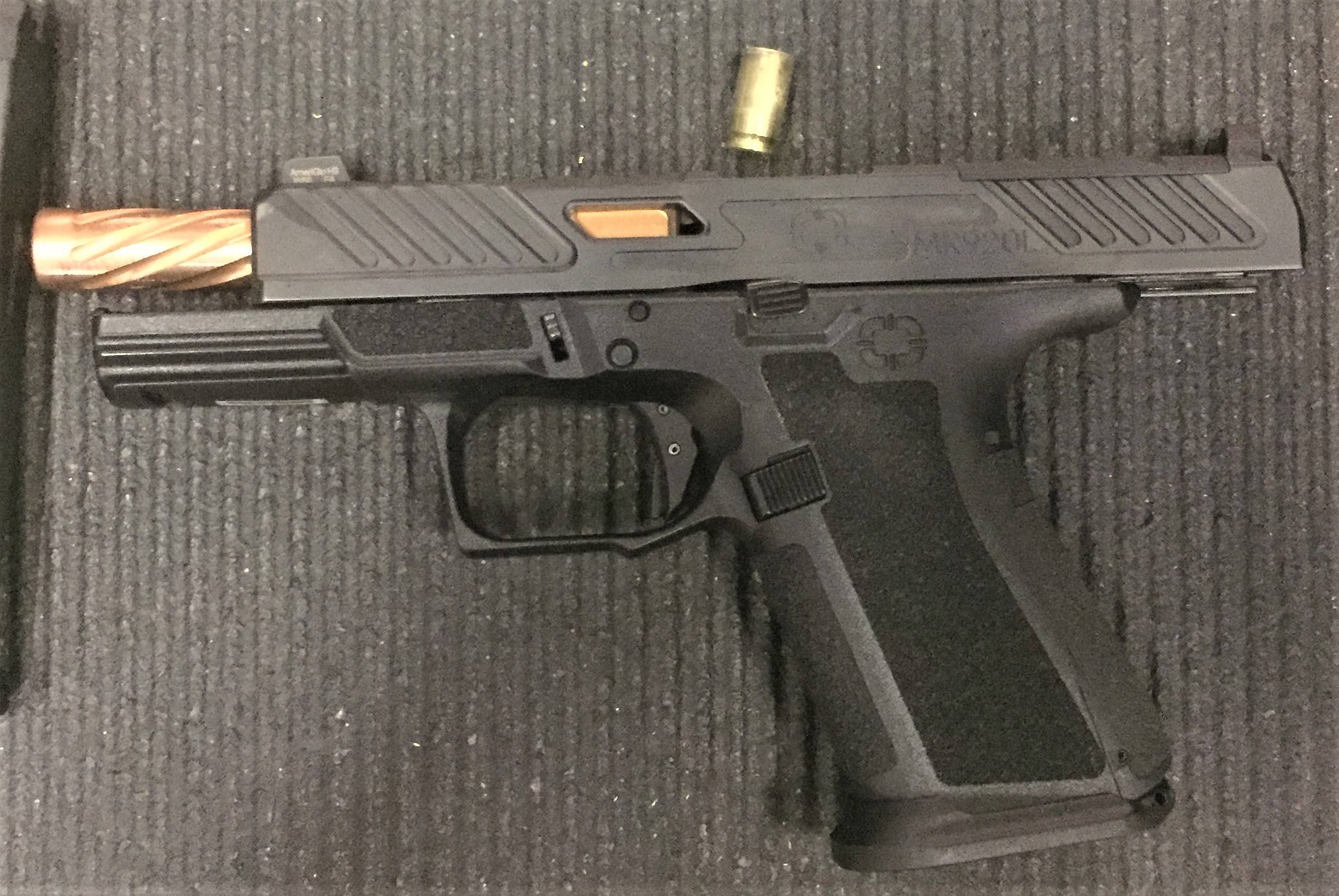 The Shadow Systems team is now on their second generation of pistols, which is also a second product line. The MR-920, their first line of one full size and one compact pistol, was successful. But the company listened to military operators, law enforcement officers, and civilians who all take their defensive pistol performance seriously, and developed an updated interpretation of their primary offering, called the MR 918 product line. Within it are the Combat model, a compact reminiscent of a Glock 19, the full size/long slide MR-920 Elite L, and the Elite, which has a compact grip and duty-length slide or, as Roe puts it, “what everyone thinks Glock should have done with the 19X.” He’s referring to the compact Glock with a full-size grip. 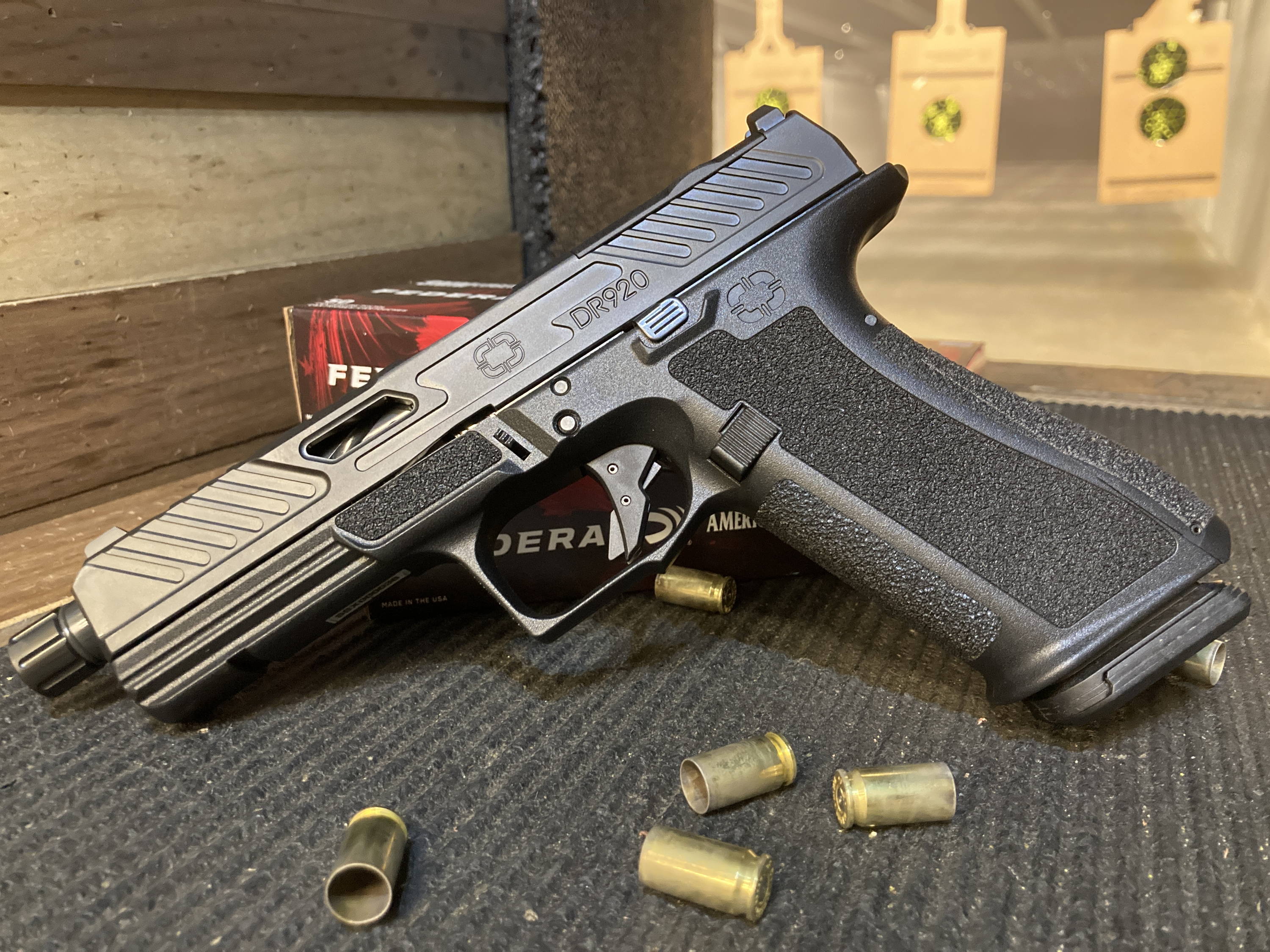 In a hurried time frame, it was challenging to sort out the current and upcoming names and models of some offerings. The DR (duty ready) 920 is a full-size version, akin to the Glock 17. This gun doesn’t appear on the company website but appears to be in production.

I’ll admit to being skeptical of anything that looks like a race gun. As an instructor and participant in numerous training exercises with people who carry guns for a living, a certain level of prejudice has been earned for treatments that are supposed to enhance performance but end up hindering reliability.

“We brought 2,000 rounds of ammo,” said Roe, and as a group, the writers seemed to sit up a little taller in their chairs, eyes widened in anticipation—ammo is in short supply after all! After hearing about the company’s history, philosophy, and pedigree of their guns, we walked to the range to try them for ourselves.

I was cautiously optimistic. Roe seemed dead serious when he said these guns are built to be reliable, first and foremost, with fine trimmings for performance and safety built in as important but secondary priorities. 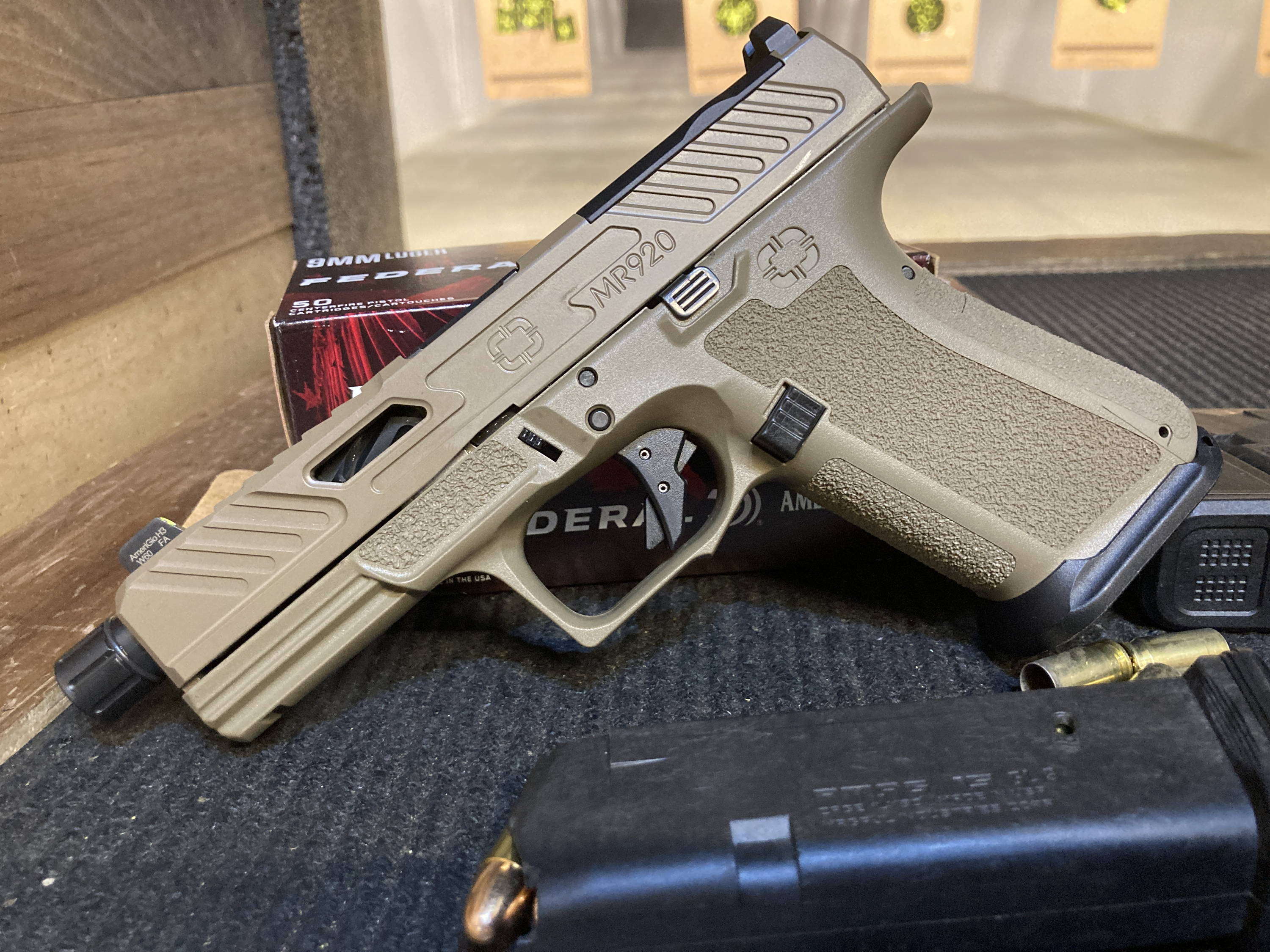 I was not disappointed. Having fired every gun in the MR 918 lineup, and one MR 920, it was apparent to me and the other writers that Shadow Systems puts its money where its mouth is. Not one malfunction occurred on the firing line. The guns I fired were accurate, with a good feel in the hand and reassuringly clean but not race-like triggers—not far off are the triggers in this writer’s estimation from the Gen 5 Glock series, which have enough palpable feedback to deliver accurate, rapid shots without being so light as to invite unintended discharges.

It’s been said you can’t please everyone. That’s especially true where handgun grip is concerned. But Shadow Systems’ approach here creatively borrows from the best in the industry to deliver a gun that’s a pleasure to shoot. Yes, the grips are interchangeable, as is the trend today. But instead of a small, medium, and large version of the grip, the company chose to change grip angle with each of the three choices of insert:  neutral, high, and low. Thus, a shooter can choose the grip angle that is most suited to his or her natural point of aim.

Ergonomics continue with a well-sculpted trigger guard, low bore axis, aggressive grip texturing, a just-right indent for thumbs, and cocking serrations that enhance handling. “Everything that’s on these guns is on there for a reason,” said Roe, pointing out that even the frontal face of the slide has been gently beveled to invite safe re-holstering and reduce “fishing” for the mouth of the holster.

The slide cuts deliver on their stated purpose of taming muzzle rise. With a group of eager writers cycling approximately 50 rounds through each gun in a few short minutes, slides got noticeably hot. That’s because they’re thinner than normal, Roe explained, but they also cool down faster than a normal slide as well.

An option on all new pistols is an optic cut. The Shadow Systems team has spent more time than most working on creating a stable platform for optics mounting. Slides are cut deep, and screws are the strongest, thickest, and longest in the industry. In fact, the mounting screws are inserted through the entire thickness of the slide, angled rearward slightly to resist the forces of recoil and racking which are notorious for loosening mounts. 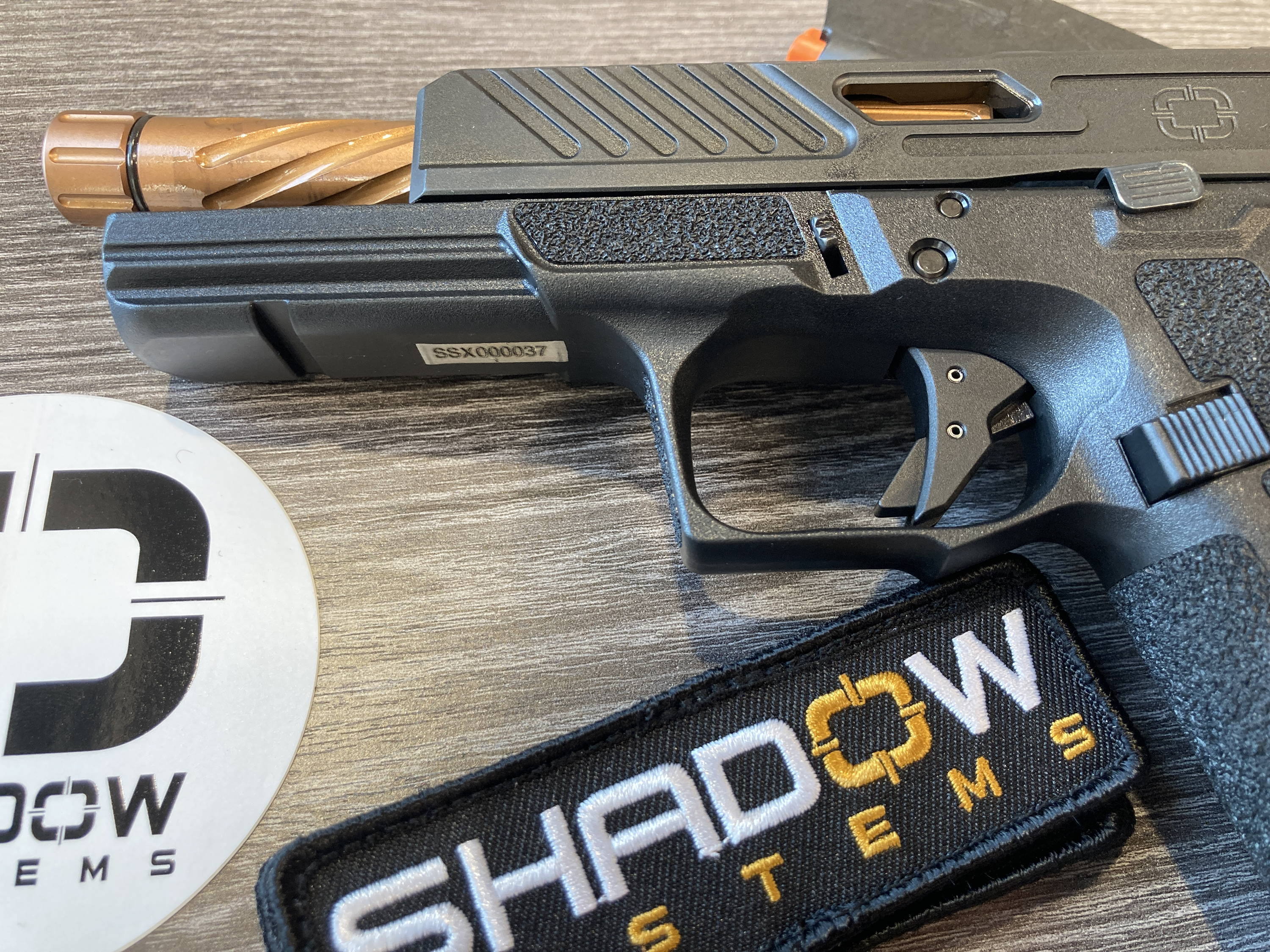 Those shiny, spiral-design 416R stainless steel barrels are coated with Titanium Carbon-Nitride, a durable finish that lends a freshly lubricated texture to the barrel even without oil, to help ensure smooth operation.

Shadow Systems’ MR (multi-role) guns use Gen 5 Glock magazines, and are compatible with Gen 5 Glock holsters, solving the common problem of where to find these accessories for a new pistol on the market. Though I didn’t get the chance to try one of these pistols in a Bravo Concealment holster, they should fit Gen 5-accomodating holsters.

Especially impressive is what Roe said regarding a common lament from consumers who buy specialized or custom guns: “It’s great, but I’ll never carry it.” This comment referred both to the shooter who purchases the gun as a “wall hanger” and doesn’t use it, and in my mind, is reflective of the finicky performance many associate with race guns. He’s quick to emphasize these are using guns. So much so, in fact, that Shadow Systems offers a free replacement gun shipped to anyone who can document having lost a gun to evidence collection following its use in a lawful defensive shooting. That’s an unprecedented guarantee coming from anywhere aside from the closest friend or relative!

Shadow Systems also offers a selection of components and kits for upgrading your own handgun. Their parts and guns are manufactured in-house, not outsourced. The pride and passion for this brand and its heritage were evident as Roe explained the company’s overall and product development.

A Shadow Systems pistol can be yours for $799 to $1,000, depending on model and chosen features. The company is committed to service after the sale, with its former military staff understanding that appreciation for fine firearms doesn’t always accompany deep pockets. If you’re in the market for an eye-catching, reliable compact or full-size 9mm, check them out.