Shot Groups Going Low? This Drill May Fix It 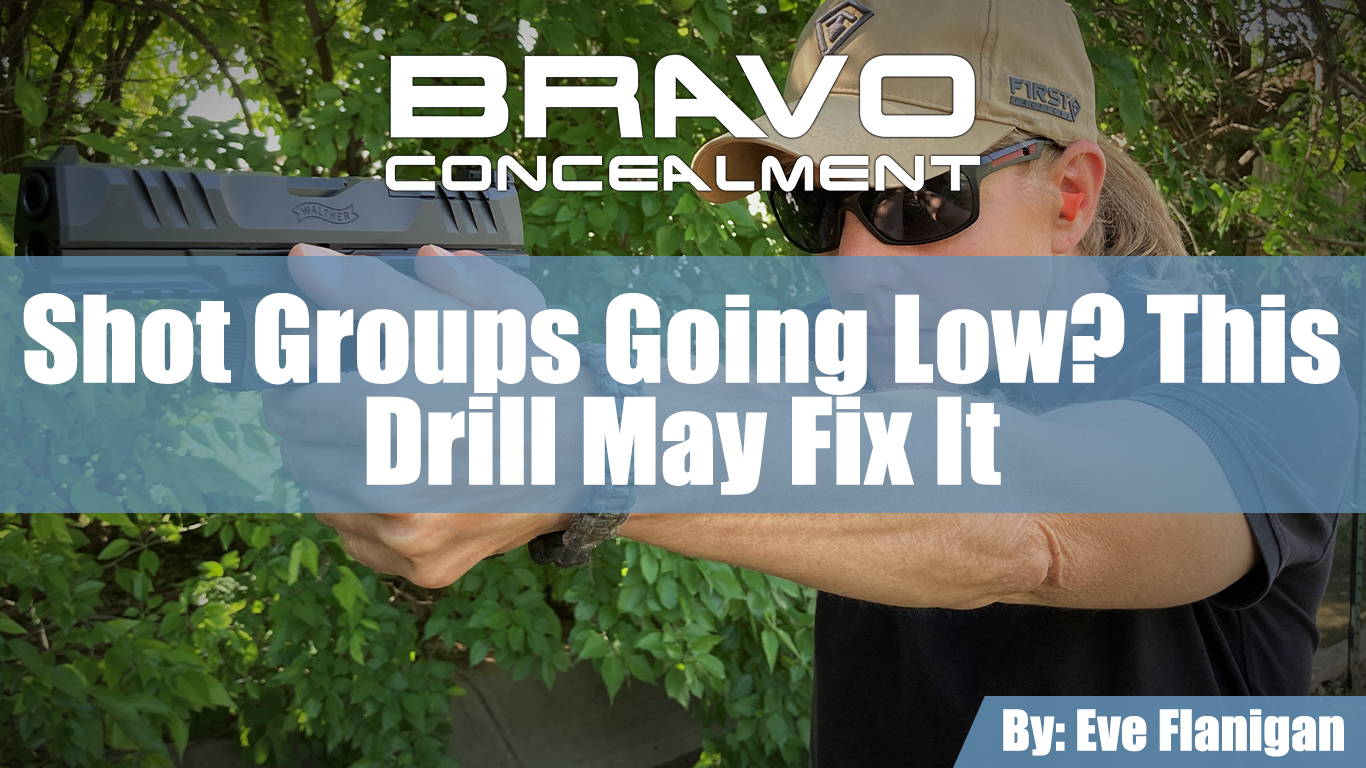 Shot groups that are lower than point of aim are the most common complaint of shooters new and old. Generally, those groups show up low and left for right-handed shooters; low and right for the southpaws. Such grouping is evidence of the most common shooting error:  anticipating recoil. This article is written to help with that if low groups have affected your enjoyment of shooting.

It's interesting to explore why this error happens, but it's been my experience that understanding why doesn't help most people solve this issue. Using the drill I'm about to share, I've seen people go from never having shot before to passing a fairly difficult qualification with less than nine hours of range time. Since a segment of those folks have to score well on that test to keep a new job, it's important to me to solve anticipation as quickly as possible. This drill seems to be the fastest fix for the most people. 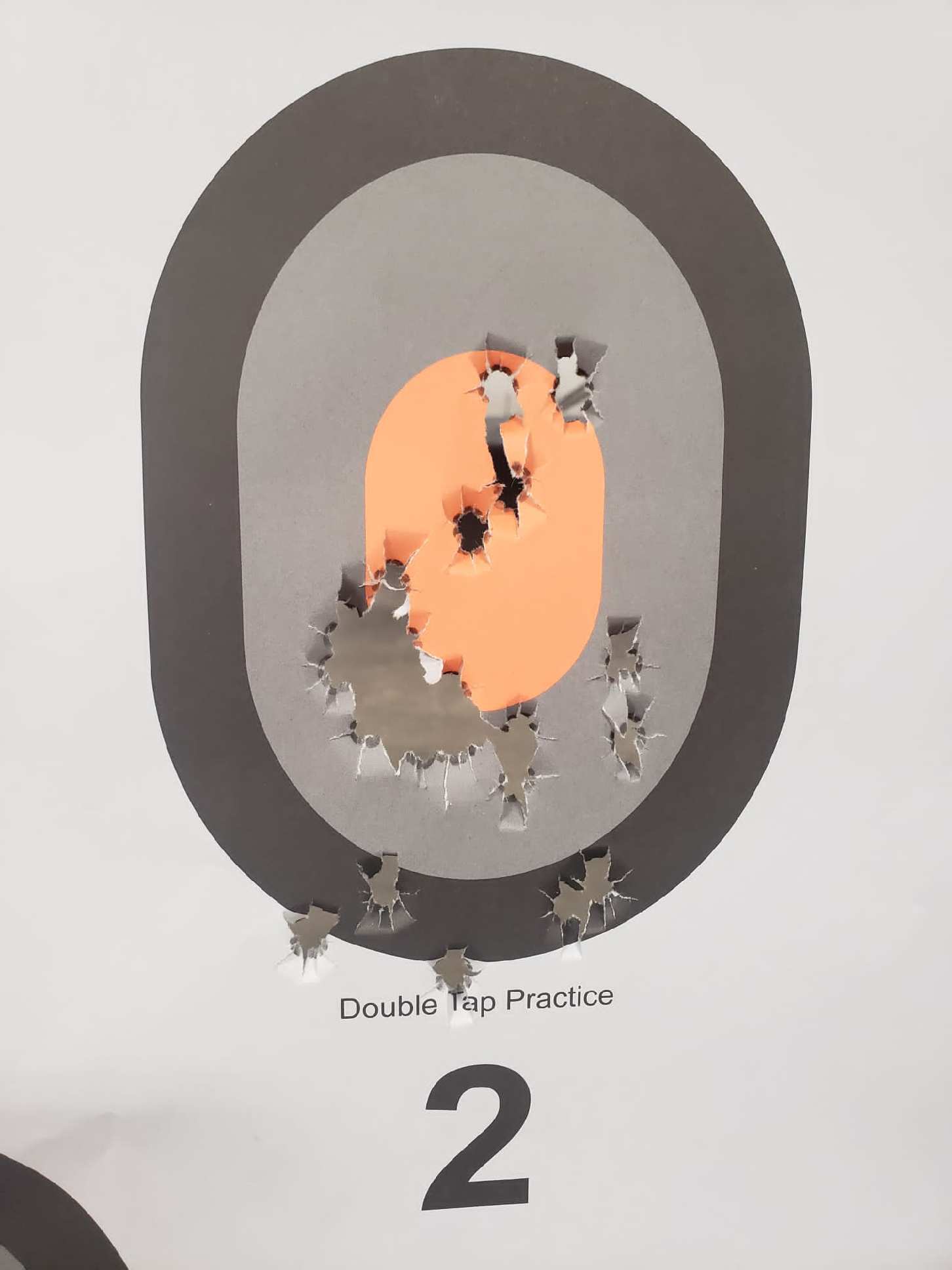 Low left group from a right-handed shooter with a slight anticipation issue. 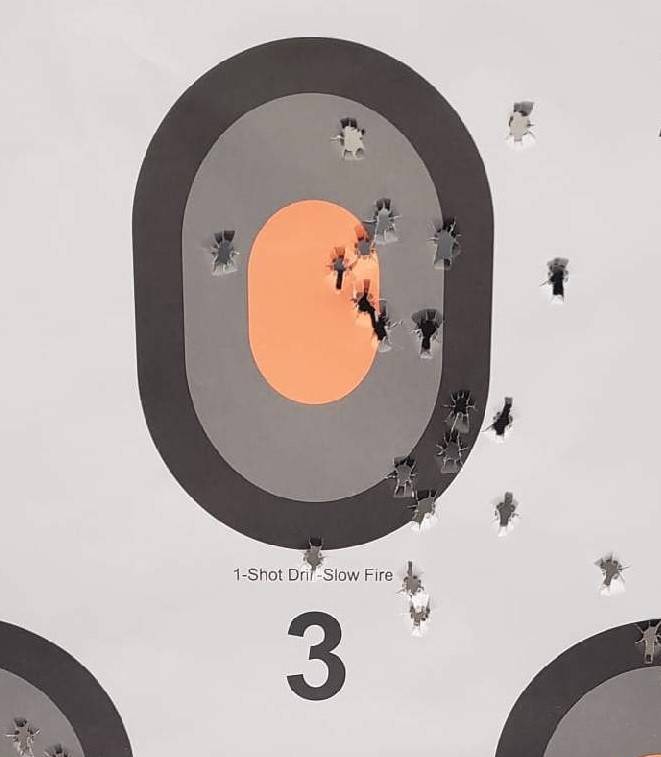 Low right group from a left-handed shooter who sometimes anticipates and also looks at the target instead of the front sight.

It's a variant on the so-called ball and dummy drill, without the need for dummy ammo. It's also quick and easy, but I've broken it down into micro-steps here for clarity:

Step 2: Remove the magazine and place it in a mag pouch or pocket.

Step 3:  Aim at the target of your choice. For most people, a one-inch bullseye from five yards is a good start. Remember to focus on the front sight (or red dot) once you've aligned the sights and superimposed them onto the bullseye.

Step 5:  Shoot again. This “shot” will be a click instead of a bang, but treat it as a real shot. Report to yourself where the front sight was in relation to the target at the moment the shot broke.

Step 6:  Repeat Steps 1-5 until you are aware of that instinctive flinch and can begin to override it by controlling your finger with conscious intent.

Of course, the gun only has one round in the chamber, setting you up for one “bang” followed by one “click.” I have found this drill most effective in helping people develop insight into what their trigger finger or, for some, wrist joints, and even eyes are doing subconsciously. Many people with severe anticipation squint or even close their eyes at the moment of firing. This drill will help that too. After all, it's impossible to re-acquire sight picture with your eyes shut!

In any discipline like shooting, we all stand on the shoulders of giants. While it's often “interesting” and sometimes unsafe to see what fans of YouTube bring to the range in terms of technique, this rock-solid one can be seen and clearly understood from viewing a video on the drill by Team Sig Sauer pro, Max Michel. It had been my intent to link it here, but it seems to have been removed.

If you struggle with those low shot groups, try this and let me know how you did in the comments.