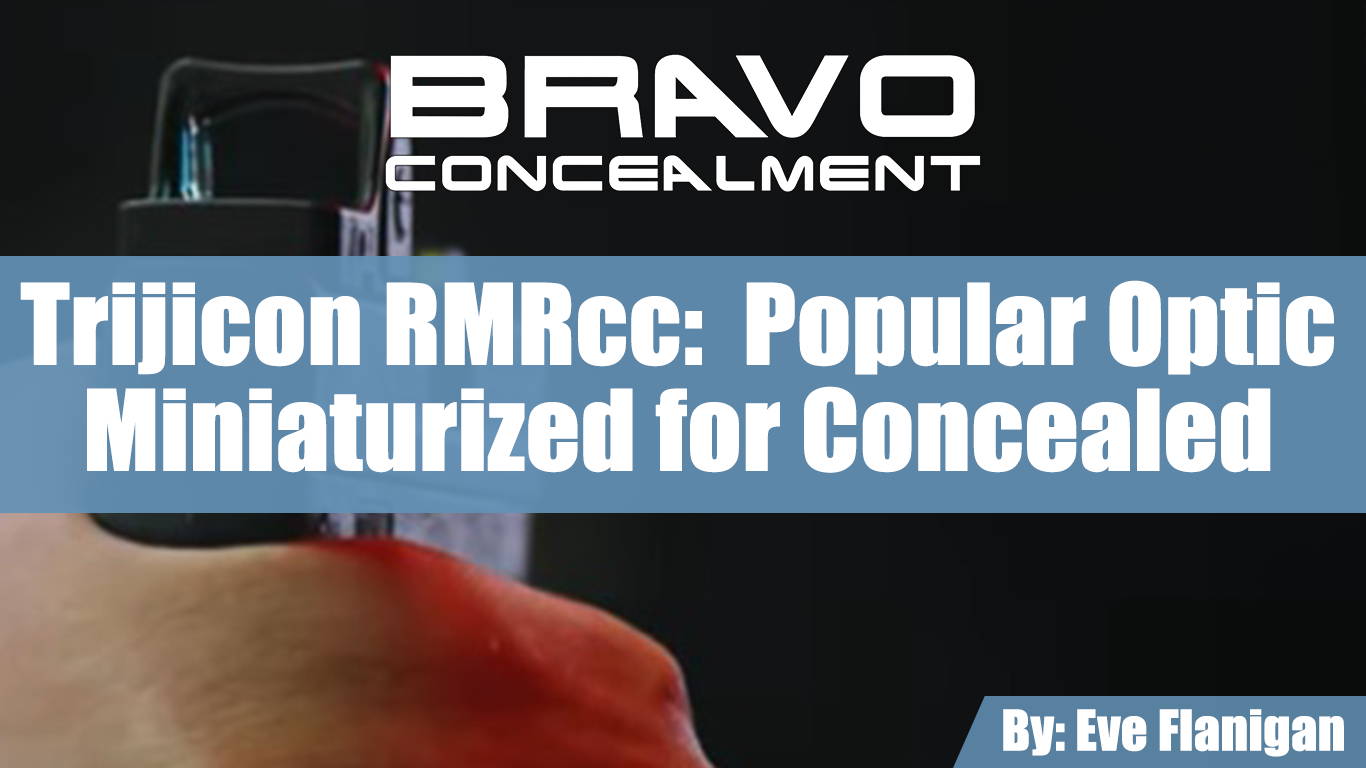 The Trijicon company has had much success with their Ruggedized Miniature Reflex optic, abbreviated as the RMR. It was the first mass-market pistol red dot and enjoys the status of having its product name generalized to others of its kind, much like “Coke” is used as a euphemism for “soda.”l It's no surprise, then, to see the company now offers a concealed carry version of the RMR. It's logically called the RMRcc.

Especially if you own the full-size version, this little red dot is worth a look for everyday carry. The RMRcc uses LED illumination powered by a long-lasting CR2032 Lithium battery. Want a fast, easy sight for close-distance shooting? Choose the larger, 6.5 MOA dot. Want to tune up precision or distance shooting with your concealment gun? Opt for the 3.25 MOA dot. Both have a useful range of eight brightness settings to accommodate user preference and shooting conditions. There's a night vision-compatible setting as well. 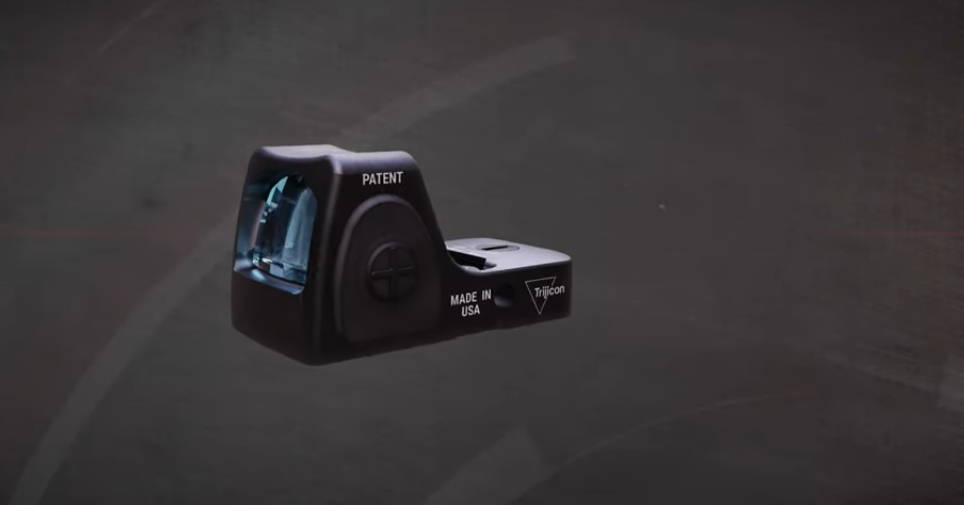 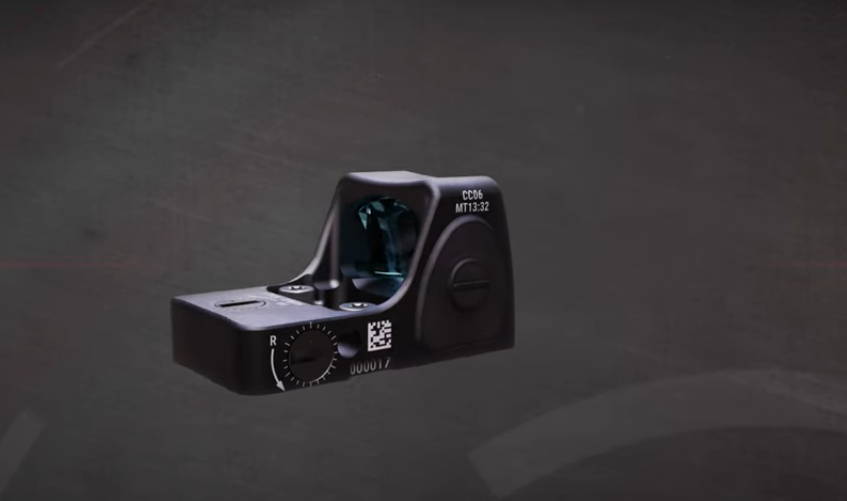 Brightness of the dot is further customizable by the pushbutton “lock-in” or lock-out” modes. In the lock-out setting, brightness of the dot self-adjusts for conditions. It's the setting most useful for concealed carry or hunting. When using the little gun for target shooting or backup gun competitions, the lock-in setting ensures a predictable and desired brightness setting for the shooting session.

On the outside, Trijicon kept the squished-top box shape of the original RMR's housing, still made of tough 7075 T6 aluminum. The design is patented by Trijcon, and the company claims this shape protects the lenses by dispersing the shock of impact while resisting snags during the draw. Toughness is enhanced by waterproofing as well. The RMRcc is submersible to depths where concealed carry isn't a primary concern! 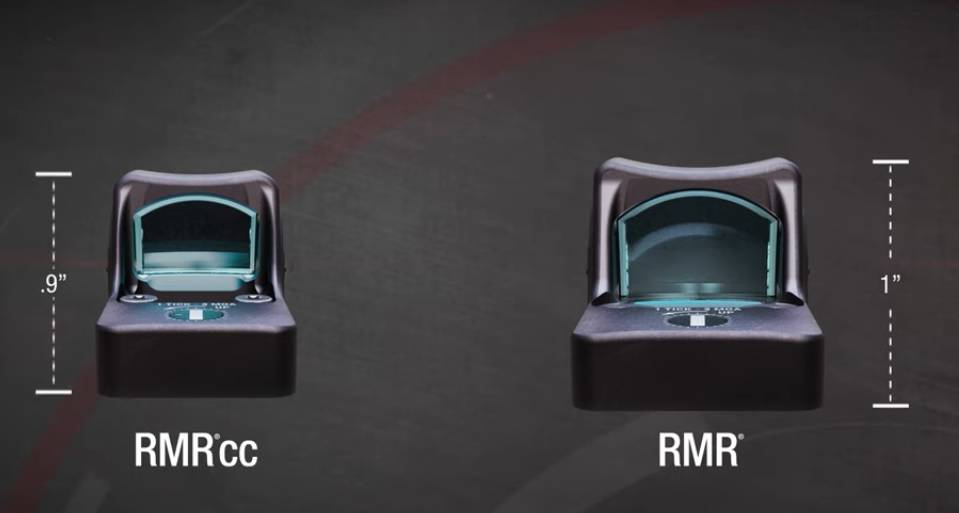 Of course, the RMRcc is smaller than the original. It measures 1.8 inches long,  0.05 inches wide, and  0.97 inches tall.-6. It weighs just an ounce. There is no magnification.

Windage and elevation are adjustable at the rate of 3 MOA per click. That makes for fast tune-ups at typical combat distances of seven yards or less.

Another trait that makes the RMRcc an attractive option is the number of concealment guns that feature the RMR pattern or offer it as an option for optic-mounting. So far in the optics market, the RMR “footprint” is the most frequently seen one. That means the RMRcc aficionado has a wider choice of guns for his or her optic than owners of other brands.

Brands that will fit the RMRcc, assuming they bear a factory-milled slide, include Smith & Wesson's Shield 2.0 series and .380 ACP Bodyguard, nearly all Glock pistols, Springfield Armory's XDS series and Hellcat, Walther's PPS, Kimber's 1911, Ultra Carry, and Micro 9 models, and Sig Sauer's 938 and P365 series. Others, such as Canik brand pistols, offer adapter plates with a pre-milled slide that can accommodate the RMRcc, though a secondary plate system adds a bit of inherent instability to the already high-recoil platform that is a short-barreled pistol slide.

It's rare that equipment is entirely perfect. The two places one might find fault with the RMRcc, at least as I see them, are in battery-related details and cost.

First, the battery. Yes, any new CR2032I can last up to four years, and that's a good thing. Still, changing it on the RMRcc is kind of a pain. The battery port is in the belly of the optic, and that means removing the optic and re-establishing zero every time the battery is changed. The long life of the battery is also due to a trait of the RMRcc I don't like at all for concealed carry purposes.

This is not an inexpensive accessory at $699. If the pistol requires an adapter plate, add up to $102 for a simple but precision-machined plate. Here, Trijicon could be kinder to consumers and should be mindful that competitors are offering a handful of quality carry optics at a significantly lower price. Nevertheless, the RMRcc should receive strong consideration as an easy transition for anyone already using an RMR on their full-size pistol, and anyone wanting to stick with the brand that owns the longest track record for handgun red dot sights.