“if I ever draw my gun on someone, I’ll be shooting.” 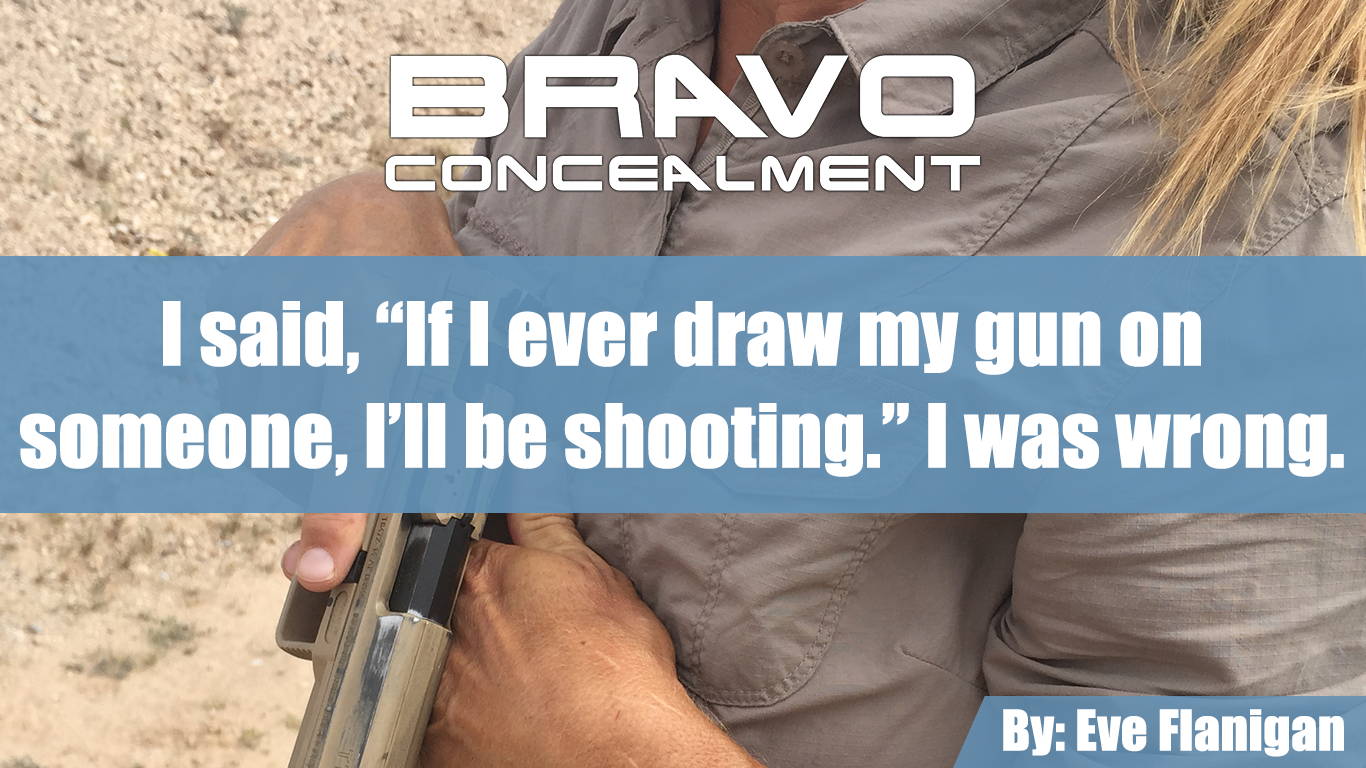 The title of this article was my own erroneous belief when I began carrying concealed well over a decade ago. Today, as in instructor, it’s a belief I hear from many concealed carriers as well. While “I won’t draw my gun unless I’m going to shoot” is a belief that lends its owner a sense of haughty civility, it’s also one that can get them killed If facing a real threat. What’s more, it’s reflective of a misunderstanding between two kinds of display of a firearm that are worlds apart in their intent and legal defensibility. Let’s be the people who end this confusion, today!

Brandishing is waving a weapon about in a threatening manner. True brandishing is often associated with road rage, such as waving a gun out the window at someone who cut you off in traffic. Using the gun as a threat of punishment and/or as an expression of unfair stuff that happens in life is stupid, unsafe, and illegal. Don’t be a brandisher.
A show of deadly force is the term one of my mentors uses to describe what I thought wasn’t in the realm of possibility when I began to carry. It is the drawing and staging the gun so that is likely visible to the potential or real attacker, often not obvious to someone across the street, as brandishing would be. It is also the reason tens of thousands of would-be criminal attacks end peacefully in this country every day, many without the police ever being called.
Legal Risks

Anytime the mere subject of a gun enters into a real or potential attack, so does legal risk. And even if you felt it was completely necessary to put a hand on and/or present your gun, concealed or not, you could face criminal charges and penalties.

According to attorney Andrew Branca, in his book The Law of Self Defense Principles, a show of force with a gun in the state of Massachusetts is only legal if the situation simultaneously justifies firing the weapon! By contrast, Montana expressly permits such a display. In all other states, to enter your gun into the situation opens up a large gray area, at least from a legal standpoint.

It’s always best, legally and otherwise, to escape if you can. This article focuses on threats that present imminent danger with no immediate way out. If you haven’t already, weigh the potential costs and benefits of being willing to defend yourself versus the risk of victimhood. No one but you can make that decision—and many situations can cause re-evaluation of that decision on the spot.

Know Thine Own Time and Distance 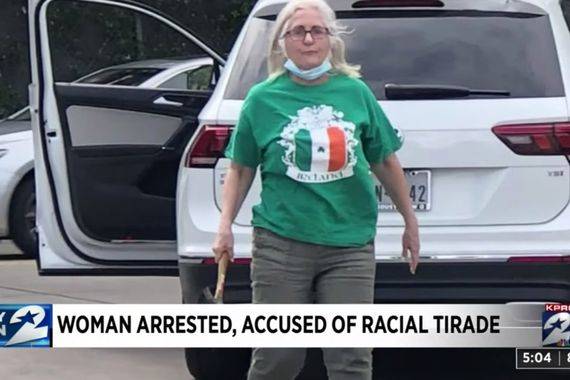 As someone who carries a gun, it is important to know the circumstances under which a lawful display of force, or perhaps we can simply call it giving yourself a chance to not be beat up or killed, is wise and necessary. Dennis Toeller, a former police officer from Salt Lake City, made a discovery that most people new to concealed carry find shocking:  the time it takes for a motivated, healthy male to charge and land a hit with an impact weapon from 21 feet—the length of an average living room—is 1.5 seconds. That’s an overgeneralization of his work, but a common and useful baseline from which to begin understanding why there are times when it is legally righteous and safer for both you and the attacker to consider having a firearm in hand before the first punch or stab is inflicted.

Those who train consistently on defensive shooting skills should be able to draw and fire at least two rounds into a torso-size target in 1.5 seconds.  Some people are faster. Most are slower. Much slower. And everyone is slowed at least a little by the act of drawing from concealment. The Toeller framework, which is not to be considered a rule, just information for planning and gauging your own training, was devised for police officers who likely had only a retention holster as a delay in their draw. Drawing from underneath clothing is a tougher proposition most of the time, especially if your concealment location of choice is an ankle, purse, lumbar area, or if the gun is otherwise buried under layers of clothing and/or retention straps.

If your gun is in concealment and if you wait to draw until the offender is on the move in your direction, you’ll probably lose. While moving, especially just running away if possible, is almost always helpful, it’s not always possible.

With a gun that is cleared of all ammunition, and double-checked to ensure that it contains no magazine and no round(s) in the chamber or cylinder, conceal it as is your normal habit. Now draw and dry fire on a 12x18-inch or so target, representing the average torso, across a room from at least 21 feet.

This draw-and-dry-fire sequence should be used to help you establish an effective firing grip on the gun and a draw that’s both fast and effective (your “shots” land on target, indicated by the front sight being visible on target for the click of the trigger). Work at methods of clearing whatever garments cover the gun, and reholstering it as well, without ever muzzling your own body parts when the gun is not in the holster. This includes your support-side hand.

Being a good concealed carrier is not only knowing skills like a slick draw and fast firing. It’s also being a student of human behavior. Legally, you must be able to justify your decision to display the gun. People have rightfully been charged with crimes related to brandishing (in my state, for example, it would be called negligent use of a deadly weapon), simply because a homeless person who approached them with a request looked scary. Justification must be based on defining that the person had the ability (like a weapon or superior size), the had the opportunity (generally this means they were in close proximity—with impact weapons also requiring no physical barriers overcome), and that your life, or the life of another innocent person, was in immediate and inescapable danger. Not sure what to look for? A good start is this article on pre-attack indicators.

Recently, a student who’s taken a couple concealed carry renewal classes contacted me to let me know of an incident in which he displayed his weapon righteously and to a good outcome. He uses a wheelchair, and for the first time in years went to the grocery store alone. As he lowered himself into the chair after getting out of his vehicle, an angry man approached him, yelling loudly about how handicapped people steal all the good parking spaces. My friend took note that four people were watching with interest, but none moved to help though the man was making quite a spectacle. He spoke calmly to him at first, trying to say he could see the man was upset but he really would just like to get on with shopping. But the rant continued. So, he tried a firm verbal response and told the man to get out of his way. The man moved closer to my client, who was unable to escape due to his position in a wheelchair with a vehicle blocking one side of it. Feeling that the man was about to approach and get physical, he swept up his shirt and placed his hand on his gun, still holstered but visible.

In this tense moment, my friend had the presence of mind to take note that no one appeared to be in the vehicle directly behind the would-be attacker, nor had anyone showed up in that area—in case of a missed or over-penetrating shot. But in that same moment, the angry man saw the gun and had a change of heart about handicapped parking. He suddenly didn’t care, and left.

“The last time this happened to me was years ago,” my client said, “and then, I was stabbed and beat up really badly. I will never let that happen again.” And then he said something that provides substance to the point I made at the beginning about a show of deadly force being a safer option:  “Really, my training saved two lives. I wasn’t going to let him hurt me, so I saved my own, but when he saw the gun and decided to leave, it really saved him too.”

It’s entirely possible that you can attract the wrong kind of attention, including being mistaken for someone with ill intent, when wielding a gun in public. In the story above, the armed citizen maintained awareness of what people around him were doing, and the presence of his gun was never apparent to anyone but the aggressor.

There is no single prescriptive method for sending the message that you’re prepared to use deadly force. Suffice to say it’s best to do so in a manner that prevents bystanders from seeing or stealing your handgun. It may not be advisable to point the muzzle directly at the threat. If the potential assailant is hesitating to lunge in your direction or appears to be concealing their own deadly weapon but has yet to show it, those are situations in which a couple of ready positions discussed are a very good thing to have in your toolbox. These can retain the security of your gun and communicate to both onlookers and the assailant that you’re giving the attacker a clear choice—not to mention honoring the Rules of Firearm Safety. Perhaps I’ll address my top three ready positions in an upcoming article.

Stay prepared for What Can and Cannot Control.

Criminals come with all sorts of determination levels. That is the factor you cannot control, and the one that will determine the intensity of any defensive encounter. There’s no guarantee your show of deadly force will end without shots fired. But it is a statistical likelihood! Just be prepared by knowing how to identify pre-attack indicators, being able to present your gun with skill, fire accurately if necessary, and communicate effectively on 911 and with police on the scene afterward—you’ll find plenty of advice on this blog about the latter.