Night Sights: do you really need them? 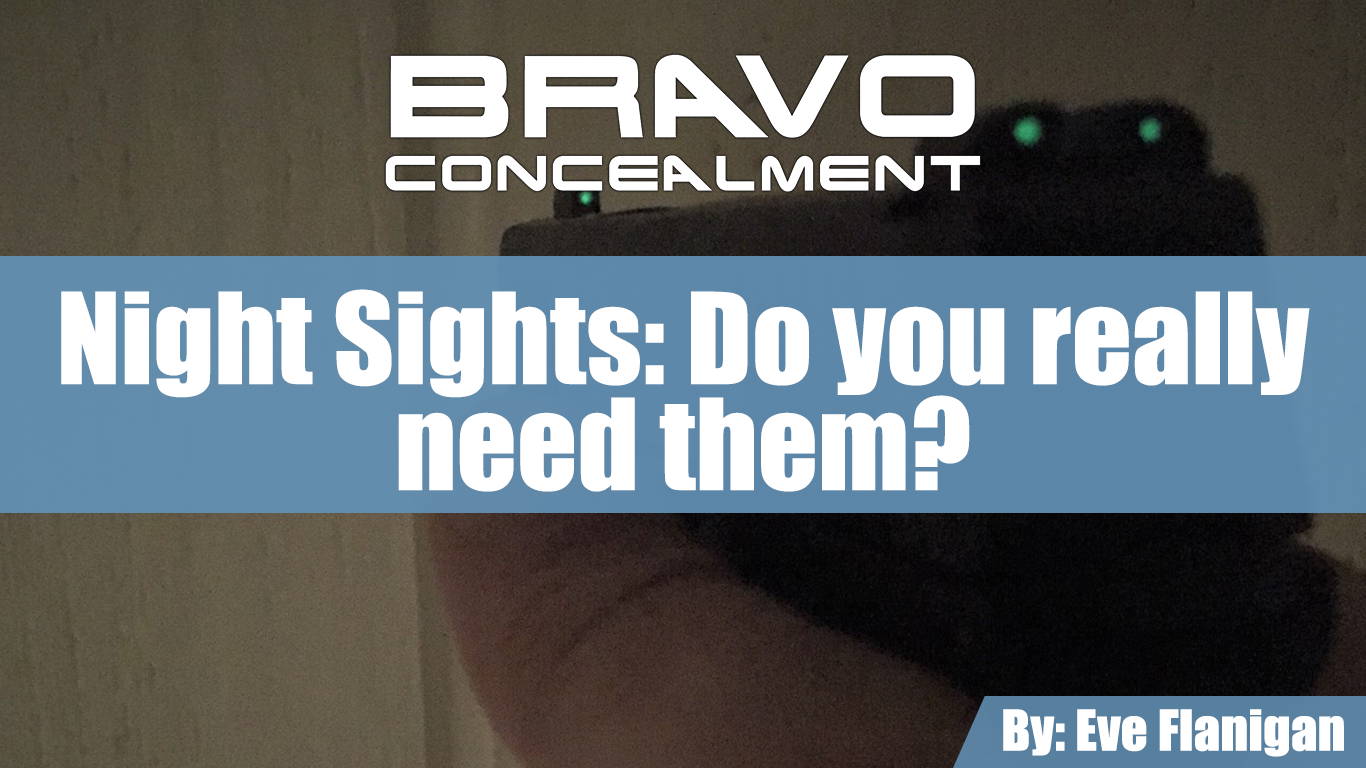 As an instructor and student of the gun, I’ve seen countless examples of gadgetry causing guns to fail. Where self-defense and survival are concerned, it’s silly to even consider allowing gear to cause defeat. So it’s no surprise that I take a dim view of most aftermarket accessories. But there is one exception, and one accessory I invest in for every gun I spend time carrying concealed:  night sights. But what are they, really, and why do I love them so much?

Night sights, to put it simply, glow in the dark. While they are not capable of doing the job of identifying a target or target environment (that requires a light source), they lend certainty to the question, “where am I aiming?” Some users choose to outfit or purchase a gun already accessorized with a night sight only in front. More commonly, they’re installed both front and rear. 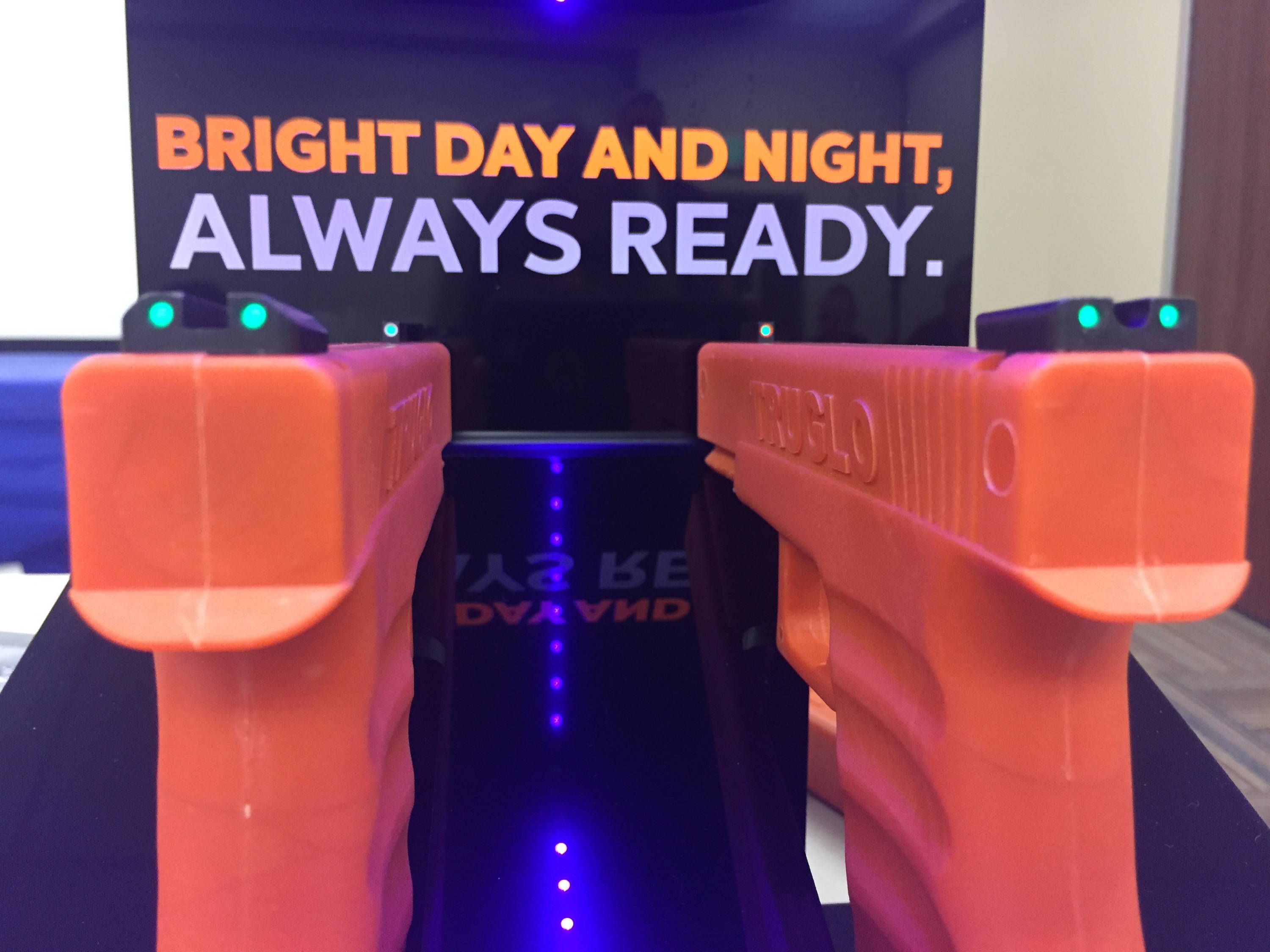 The source of light in these sights comes in two forms:  phosphorescent or tritium. Walther and HK offer phosphorescent sights on many or all of their striker-fired models. These sights are “charged” in just seconds by exposure to light—the more exposure, the brighter they glow. Their glow is a lime green color, same as on wind-up bedside clocks you may remember from youth or perhaps have seen at a secondhand store.

These sights work well, so long as they’ve had some light exposure in recent hours. Pull a gun out of a safe in a dark room, and there won’t be any glow. Likewise, a front sight that’s traveled around in a holster all afternoon won’t glow as brightly as the rear sights that got direct sunlight. 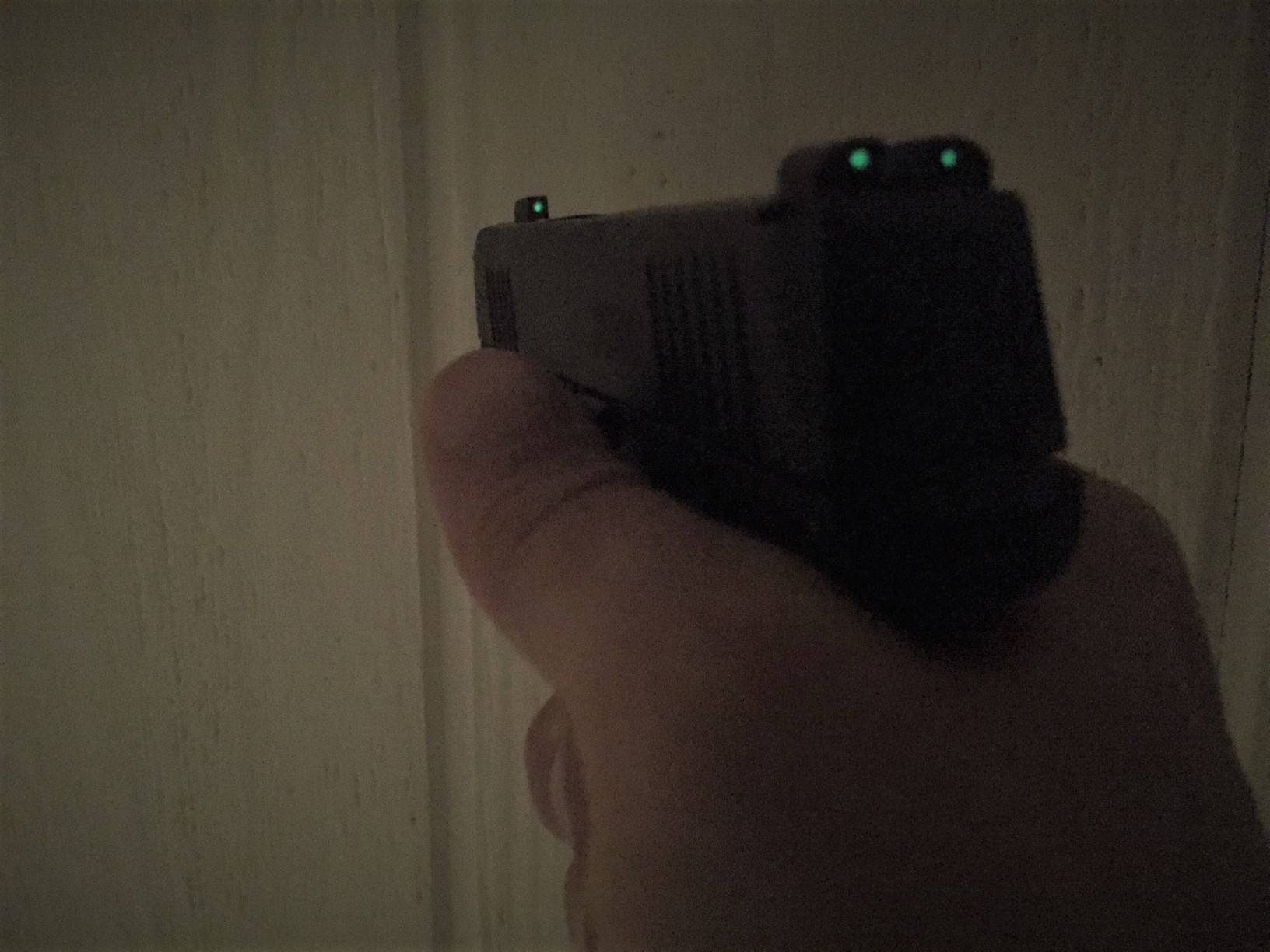 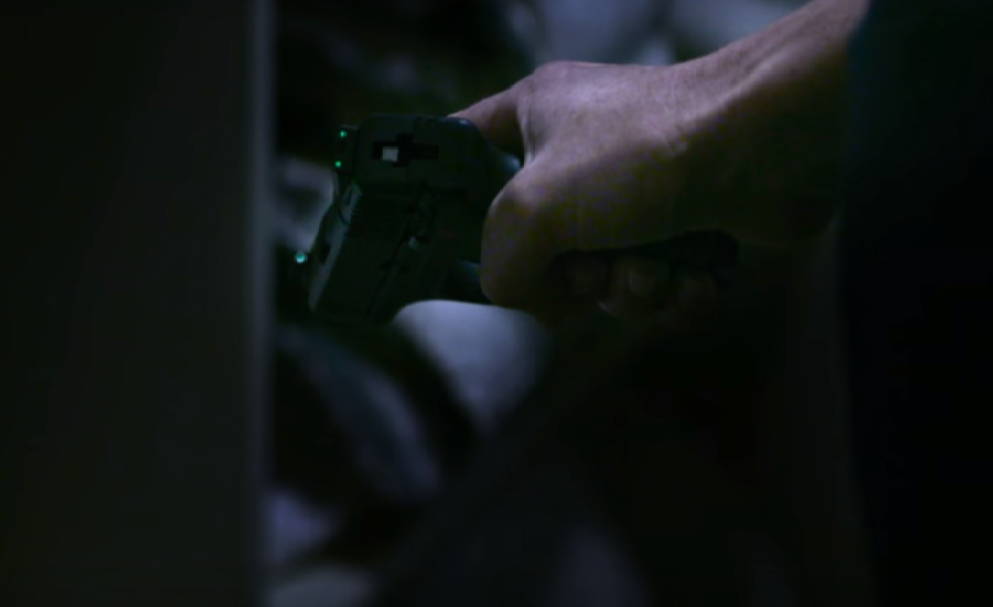 Phosphorescent sights can be, for a while, really bright, almost hilariously so. At an annual nighttime qualification shoot I participated in, on a very dark range, fellow shooters accused me of distracting them with my VP9’s sights! I’ll admit I did need to adjust my focus thanks to the rear sight dots being brighter than the front---but the ability to use any night sights for dim-light shooting is a tremendous leg up compared to using non-luminous sights.

Tritium sights can glow different colors depending on other materials mixed with the tritium. Most appear white during the day but emit a green glow. Tritium sights are offered as a standard feature on many Sig Sauer pistols as well as the upgraded models of other brands too numerous to mention.

Many choices of user-installed tritium sights exist, which can appear white, yellow, or green in color during the day. My own preference is Truglo's TFO (tritium/fiber optic) with its green rear and yellow front sight. There’s no time wasted figuring out which dot is which in total darkness as happens with some sights that are the same color front and back. Another way to avoid sight identification delays is a configuration like XS Night Sight lollipop-and-stick-looking configuration. Both work well, with XS Sights’ product being literally higher-profile with more suppressor-ready options. However, beware that higher sights will require a so-called six-o’clock or even lower hold for precise shooting at distances greater than about 20 yards. 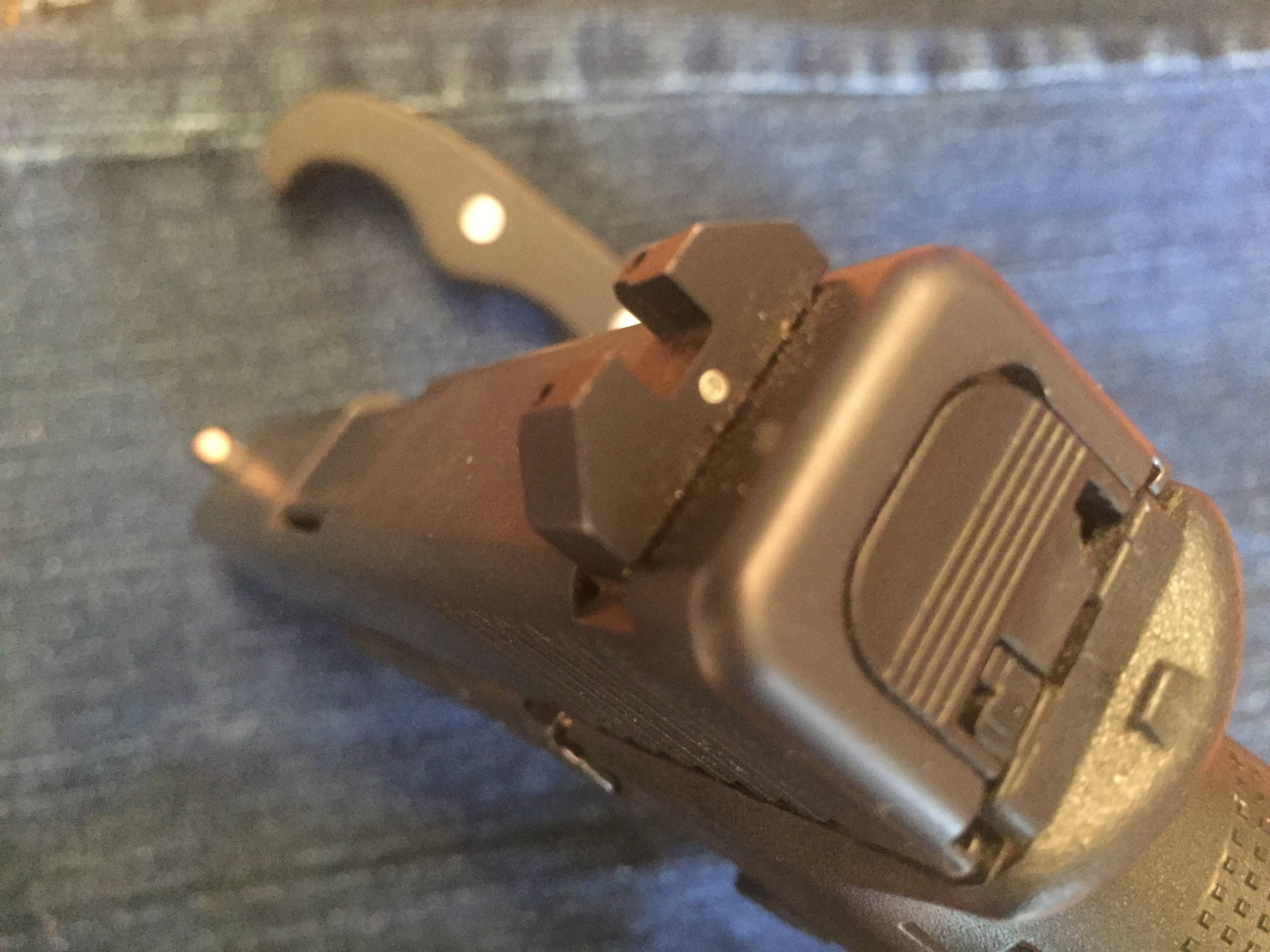 Tritium and fiber optic front sights are often longer in profile than their factory counterparts, and this can make them vulnerable to physical pressure from holstering or other activities. I have seen many that were sloppily installed either show up to the range slightly crooked or loose. Take time with installation, using a thread-locking product, to insure that the job is done right. And occasionally check all sights, factory or otherwise, for tightness.

Tritium and phosphorus both are sources of light because they are inherently radioactive to a small degree, with phosphorus requiring light to excite the electrons that emit a green glow. One student, a young married man who planned on carrying his EDC firearm appendix-style, shyly floated the question of whether night sights are capable of damaging DNA material. My friendly Truglo rep (who happens to be based in Texas, just like Bravo Concealment) guided me to government safety bulletins that explained the fascinating but quite harmless radiation emitted from these accessories. It turns out that tissue as thin as one human skin cell is enough to deflect, or more accurately neutralize, ionizing radiation. So as long as a user isn’t eating directly off his or her sights, or heaven forbid, otherwise exposing them to bodily orifices, there is no health risk. To put it in perspective, both sunshine and cell phones give off exponentially more radiation than night sights.

Expect night sights to last about a decade. The one pair I’ve managed to exhaust, the previously mentioned Truglo TFO bi-color set, lasted 12 years, providing many years of practical use and enhanced readiness.

At a cost in the low hundreds, sometimes less, whether included as stock or added on later, night sights are a true asset to the concealed carry life. Your local gun expert may charge a fee for installation if you want a professional’s touch. Not every pistol will accommodate aftermarket sights, but many do. With some research, you can step up your concealed carry game with a very worthwhile investment in night sights.