Should you be carrying frangible for EDC?

Most people think their choices of handgun ammunition are either full metal jacket or hollow point, or in a few cases birdshot. But there is a fourth choice, one that’s been around for a long time as a training aid but with the aid of research and development, has come into its own for concealed carry.

Frangible ammunition is a general term for ammo that includes a bullet made of very tightly compressed powder. That powder may be comprised of a number of substances, though copper is the most common. Some loads include steel, tungsten, brass, and perhaps others—manufacturers are understandably guarded about their best formulae. But why consider frangible for EDC?

Advantages abound with this ammunition, but the biggest is the reduced risk of ricochet. Especially in urban environments or some industrial settings where poured concrete, marble, and/or granite surfaces abound, unintended injuries from copper jacket or bullet ricochet are a real possibility. At least one company attempted to break into the law enforcement market with a high-performance ricochet round, but the very quality that results in reduced risk with frangible is also its downfall for police work—it does not effectively incur a bullet strike after penetrating the steel door of the average automobile.

While shooting at a suspect in a car is well within the scope of police work, it is nearly unheard of in civilian life, save for the 2017 church massacre at Sutherland Springs, Texas, in which a civilian and his AR-15 pursued and fired upon the killer. With this being one instance of a defensive gun use among hundreds of thousands that occur annually, chances are good a civilian will never need to shoot through a car door.

Other advantages of frangible ammunition include the ability to fire upon steel targets at close range with no risk of injury to people or the target. Because most frangible bullets do not contain lead, these rounds can be appealing for those who practice at indoor ranges, where lead exposure risk is highest.

But does frangible ammo work? I can personally attest to its value and its range of uses. Frangible is now available in solid bullet form for training, its traditional use. Navigating through a “shoot house” with poured concrete walls and floors, hits on paper or cardboard show up well but there is no danger of backsplash to the people in the house. This, and training with steel targets in close quarters, are the traditional uses of this ammunition. But newer loads are specialized just as defensive loads are, to achieve specific penetration and expansion parameters.

Modern frangible ammunition is purpose-made for training, defensive, or hunting use. But it is important to understand its substantial power. Just like a regular bullet, frangible will penetrate and damage cement block, plywood, and other building materials, as well as the aforementioned car door. It will simply have much less energy on the backside as compared to a traditional bullet. So using frangible is not a pass on being sure of one’s target and the responsibility to make sure every round doesn’t go somewhere that’s not intended. 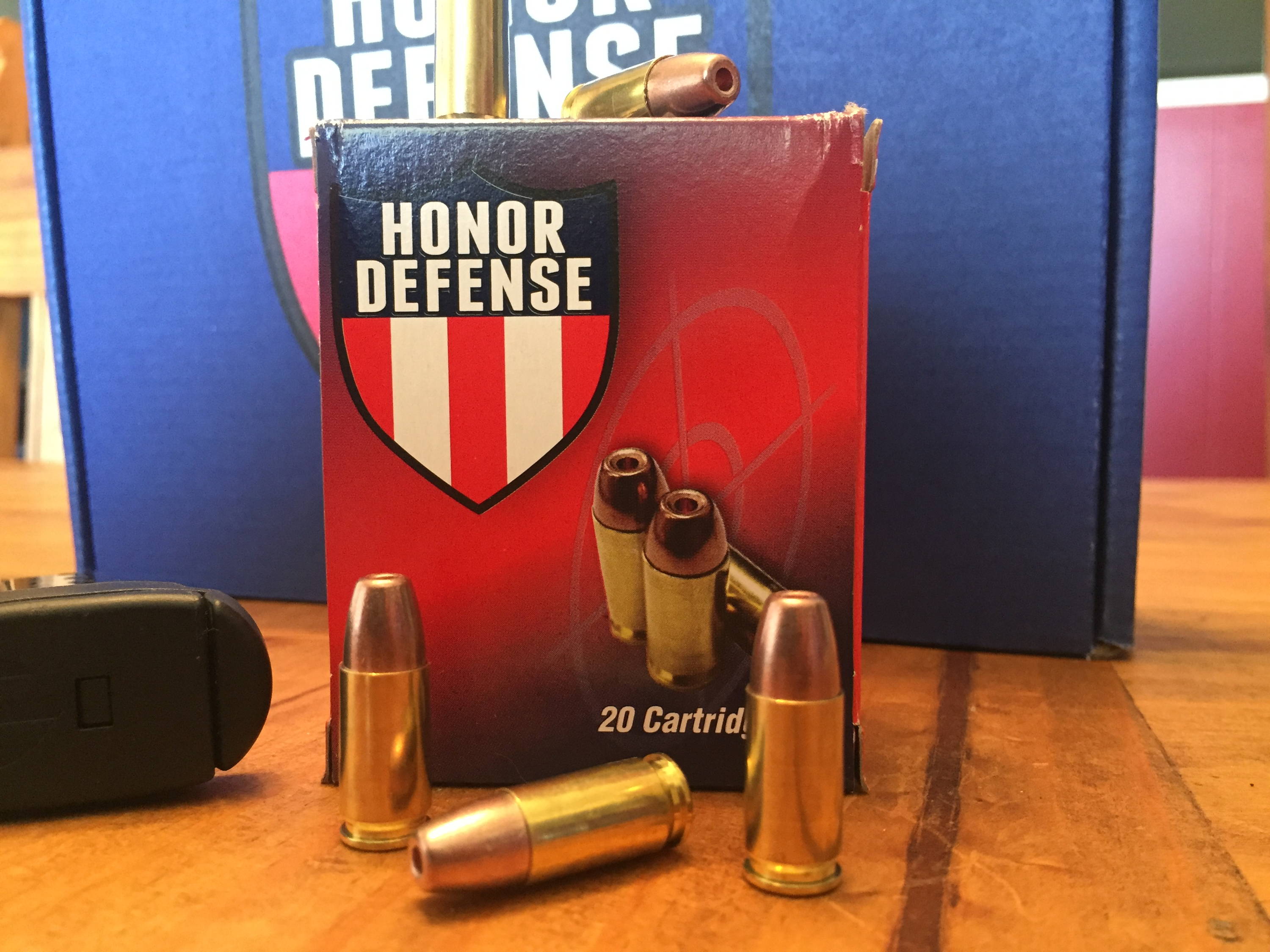 What frangible can do, for defensive uses, is highly impressive. I feel fortunate to have had some test ammunition, 9mm “hollow point” frangible made by Sinterfire, when a sizable rattlesnake visited my back porch and partially snuggled up to the glass door. With injured wrists, I was unable to swing a shovel, but one round of Sinterfire HP frangible rendered the unwanted guest into three pieces, with not a mark on the porch concrete or glass save for snake blood. In both formal gel block testing as well as several homemade experiments, “frange” has proven to have extraordinary impact on targets, creating not one but dozens of wound channels and causing a larger shockwave in gel blocks than is seen with even the highest-grain comparable hollow point loads. 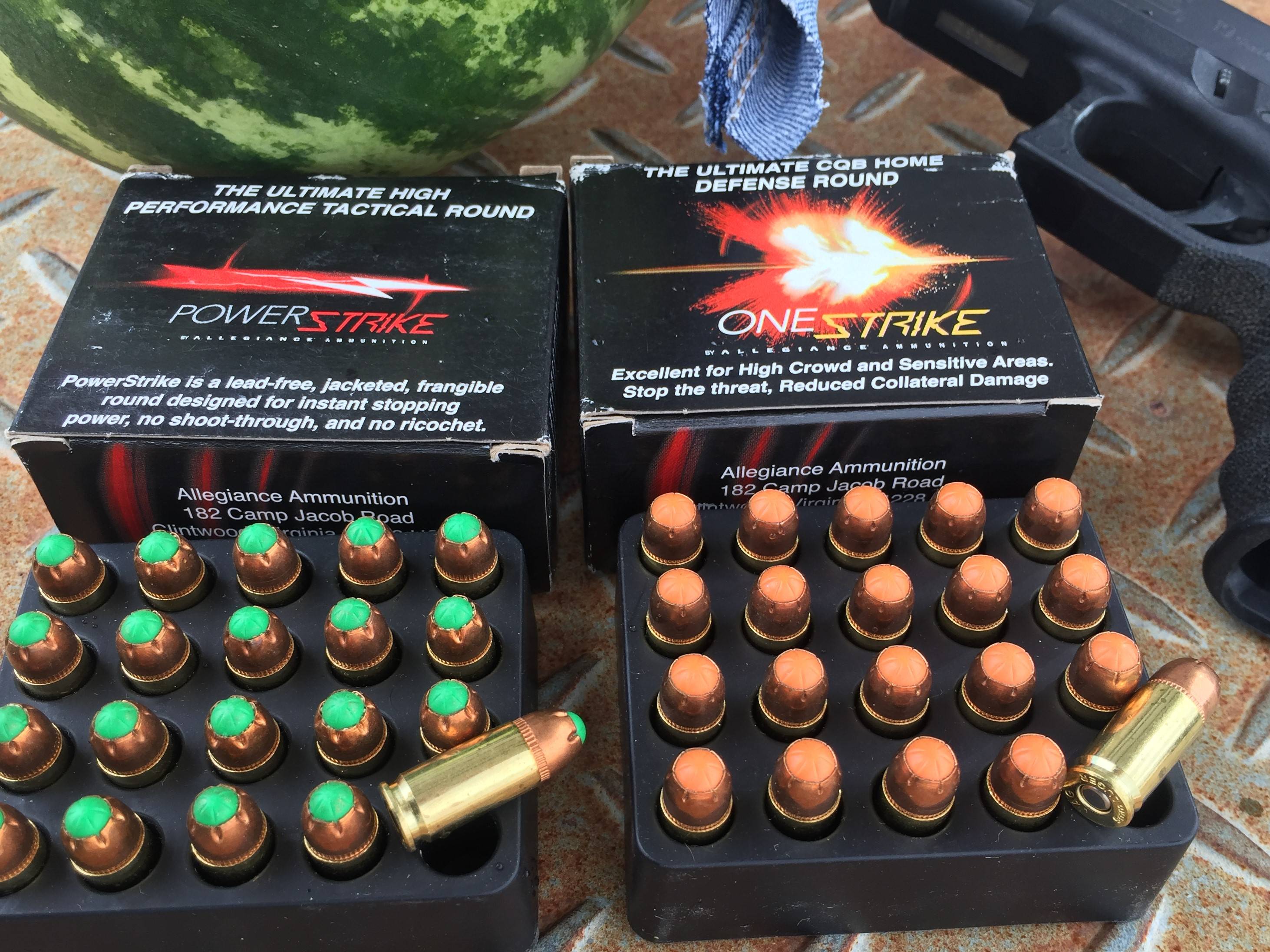 One of the biggest innovators of frangible ammo manufacturing is a small Virginia company, Allegiance Ammunition. Their 95 grain, 1,275 feet-per-second Power Strike self-defense load uses a copper jacket over pressed powder as part of a recipe to create a very destructive impact—exactly what’s needed when stopping a deadly threat. Their 75 grain, 1,475 feet-per-second One Strike home defense load is designed for rapid fragmentation within four to six inches, with very reduced risk of wall penetration, On a recent comparison of the two, I found both to have lower recoil than my usual 115 grain FMJ, but the difference on a basketball-size watermelons, covered with two layers of denim, was noticeable. The Power Strike load delivered a more dramatic and explosive effect, cutting the melon in an interestingly even eight pieces, with all matter except the denim flying rearward. One Strike also demolished a denim-clad melon (an approximation of FBI testing protocol as well as a representation of a clothed body), but was noticeably less explosive on impact, and one chunk of melon fell lazily in front of the table.

Frangible has come a long way and I believe is well worth consideration for everyday carry. It’s what I carry in the chamber and in the mag that lives in my EDC gun. I like knowing it will be effective on target but give the grace of not bouncing around if the target dashes aside and a round goes into concrete or steel. 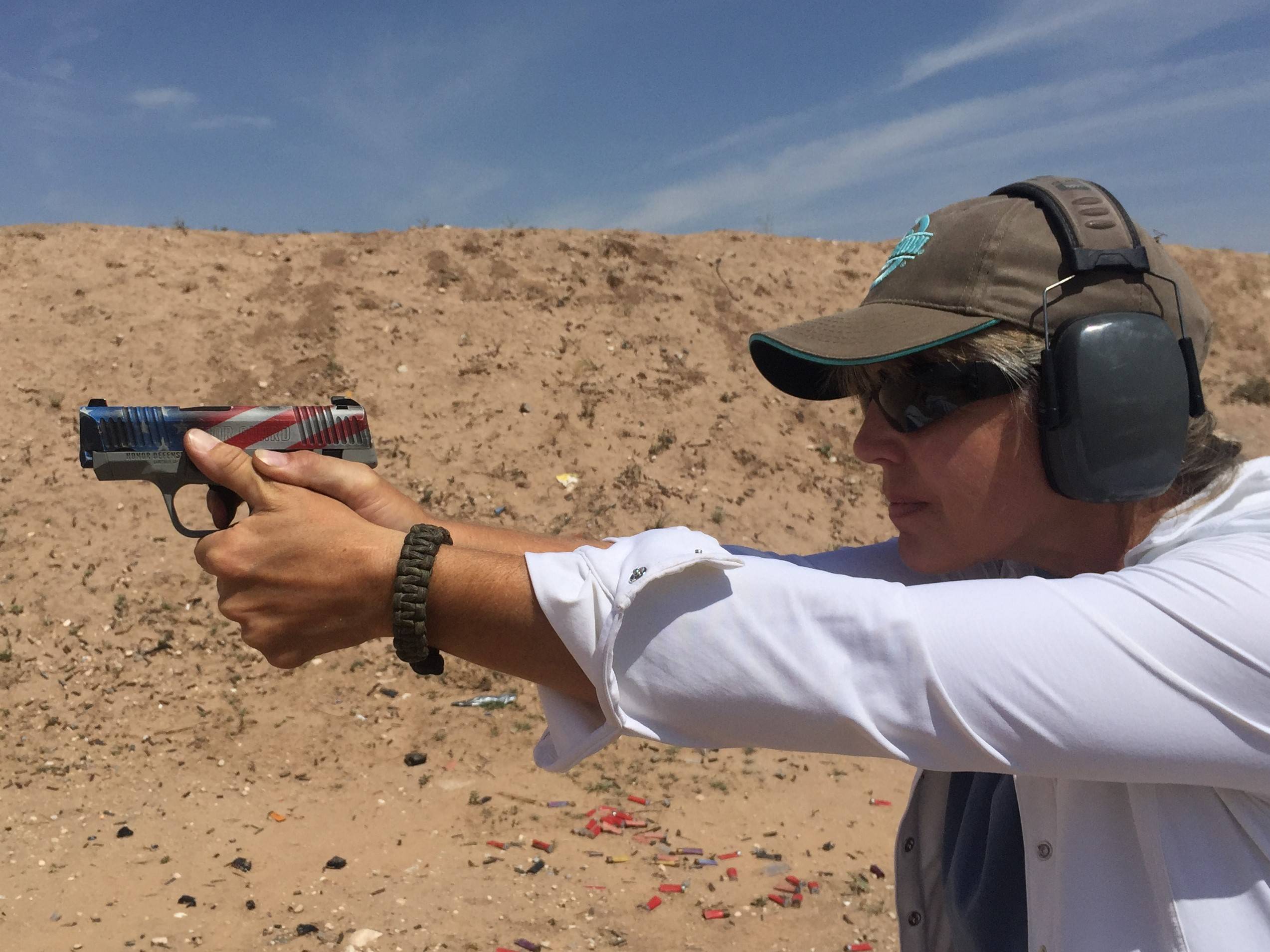 For all its advantages, a couple cautionary measures are necessary before taking up frange for yourself. Check the owner’s manual of your firearm to be sure the manufacturer does not recommend against this ammunition. That is the case with one pistol in my collection. Furthermore, I believe frangible is best suited for semiauto pistols and not revolvers. Although I’ve seen no factory warnings about it, I have seen catastrophic results from the use of frange in two good-quality, well-maintained wheelguns. I have run several brands of frangible through Glock pistols with no ill effects at all.

Of course, always identify your ammunition before loading. Frangible can look just like any other round. If it’s not contra-indicated for your firearm, check it out, treating it as any other ammunition. You may decide it’s the perfect match for your EDC. 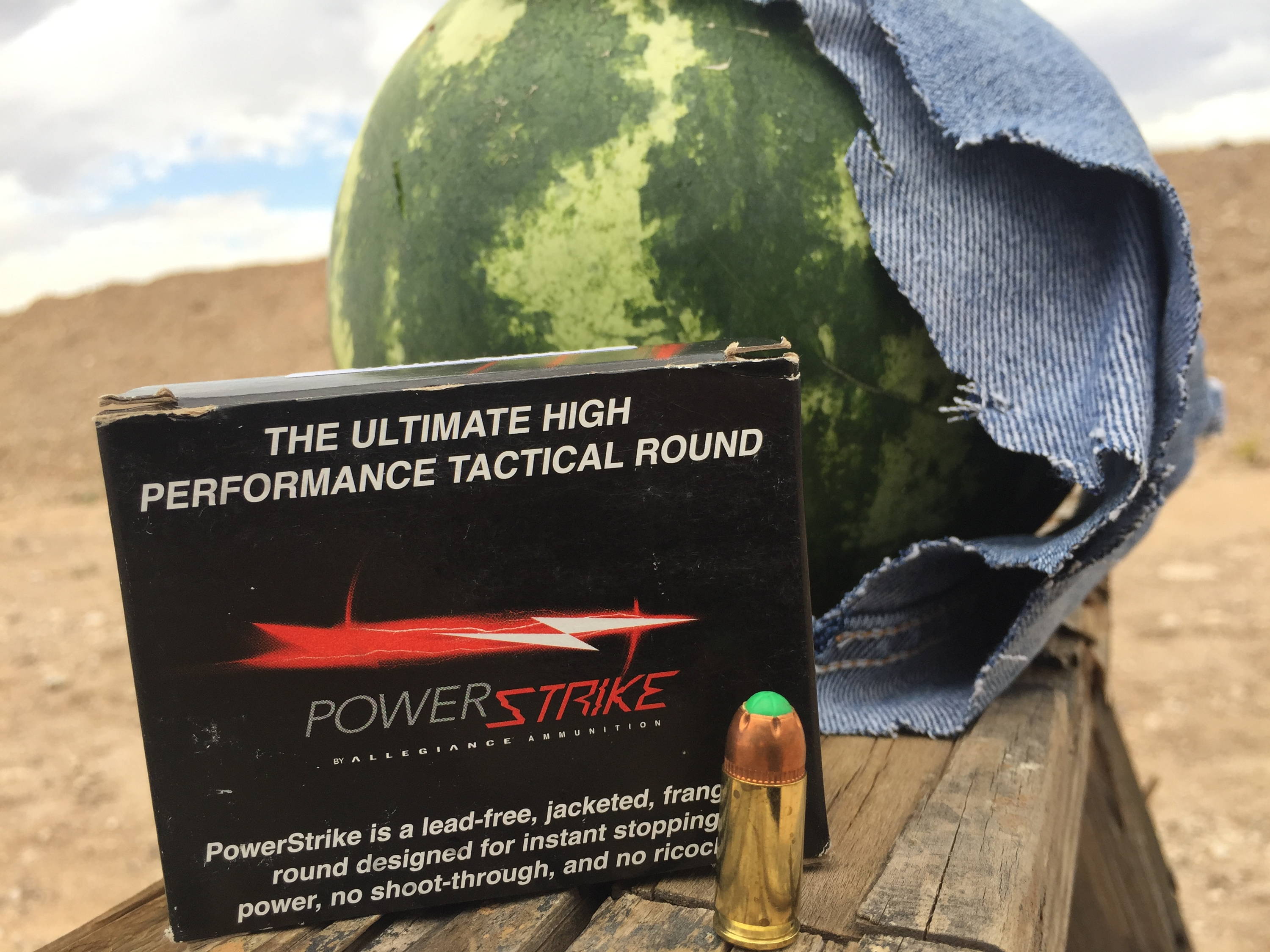 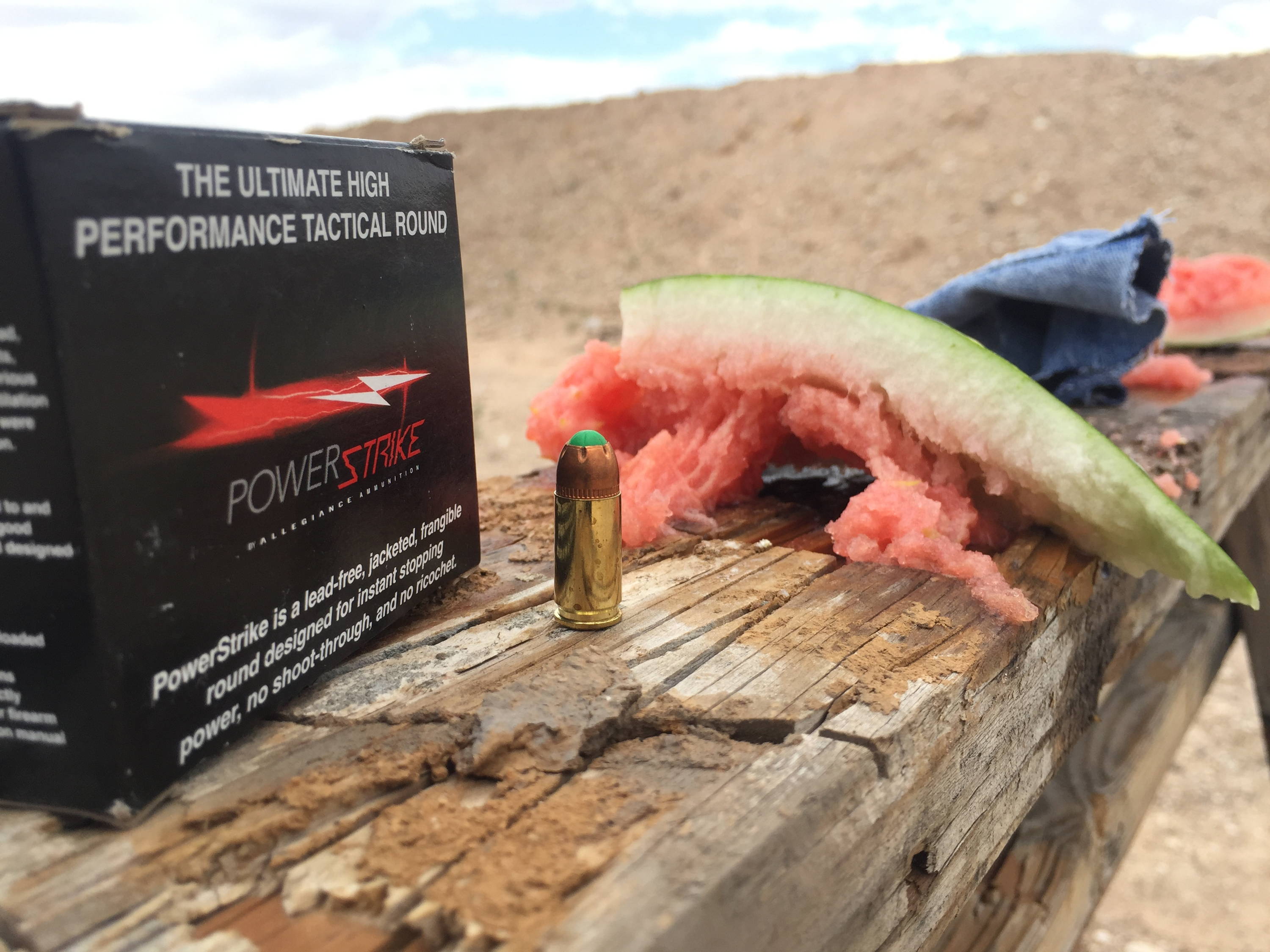 This shows the effect of Allegiance Ammunition’s 9mm Power Strike, fired from seven yards onto a basketball-size watermelon with two layers of denim stapled to the front.